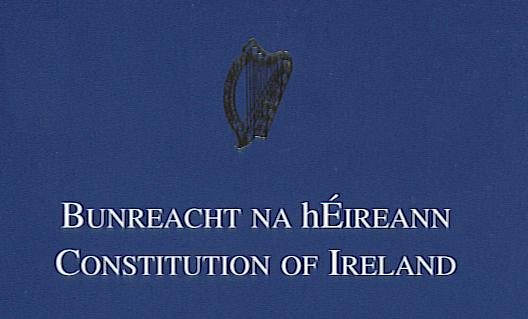 Although Eamon de Valera had fought for an Irish republic during the rising of Easter 1916 and later during the War of Independence 1919-1921 and on the anti-treaty side during the Civil War 1922-1923, he was able to ascend to power within a twenty-six county Free State which was stilled heavily invested with reminders of the British establishment in Ireland.

The new Constitution  of Ireland

Many of those who had supported de Valera, and also those who did not, expected him to proclaim a republic as soon as his party assumed power in 1932. Instead, he started to dismantle the trappings of British colonialism bit by bit and in the following years, he busied himself with the writing of a new constitution (Bunreacht na hÉireann), which when introduced in 1937, enabled the Irish Free State towards greater autonomy albeit stopping short of a declaration of a republic.

The Constitution, written in both Irish and English simultaneously, was enacted by the people of Ireland in the name of “The Most Holy Trinity” and introduced officially an ethos that was Gaelic. It ensured recognition for Roman Catholicism as the religion of the majority of Irish people, whilst at the same time recognizing the rights of the Protestant, Jewish, and other religions. Catholicism was not appointed as a state religion but Catholic social theory was dominant, though more often than not in broad agreement with other Christian churches, within the terms of the Constitution thereby banning divorce and ensuring recognition of the role women in the home.

It determined that there would be a Presidency and a government (Oireachtas) of two houses, the House of Representatives (Dáil Éireann) and a Senate (Seanaid Éireann). It invested the Oireachtas with the sole and exclusive authority of making laws for the State with the proviso that no law that was repugnant to the Constitution itself would be valid. The name of the State in Irish was to be Éire and in English, Ireland.

The Constitution, whilst asserting in articles 2 and3 that the national territory of the Irish nation covered the whole Island, recognized that Éire governed only 26 of the country’s 32 counties, therefore giving de facto recognition to Northern Ireland.

Public support for the Irish Constitution

It was opposed by Fine Gael, many labour orientated groups, unionists, those who wished to maintain the links with the British Commonwealth, and feminists. Fianna Fáil and republican groups gave it their support. It was put to a public plebiscite on 1st July 1937 and was passed by a slim majority of 56%. It became law on 29th December 1939. Since that time the Constitution has been amended on a number of occasions after being put to the people for approval.

The Effects of the Penal Laws Upon Irish Society