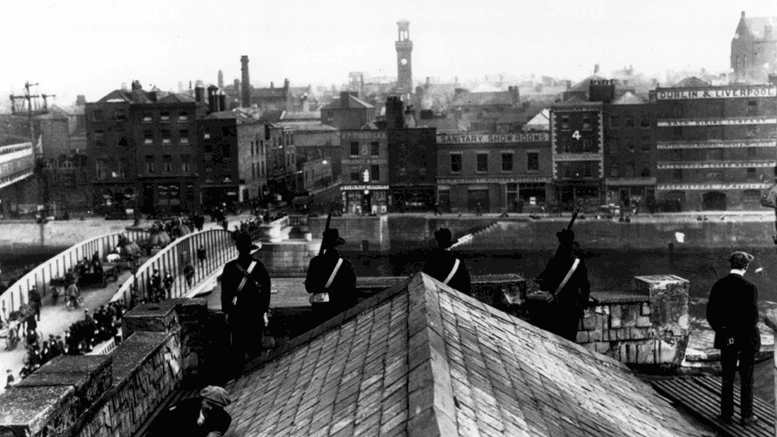 The 1916 Uprising occurred on Easter Monday in Ireland lasting 6 days with over 12,000 British troops surrounding Dublin and the Irish republican leaders surrendering to stop further civilian causalities. It’s considered the birth of an independent Irish Republic.

The Irish rebels used World War 1 to their advantage as Britain was concentrating its military efforts in central Europe. Germany was to assist with the Irish rebellion by sending a ship of German arms to the Irish shores, but the ship was captured by British forces before reaching the rebels.

Events of the 1916 Easter Rising

On Easter Monday 24th April 1,000 Irish men and women from the Irish Citizen Army and Irish Volunteers attempted to overthrow the British from Dublin and announce the Proclamation of the Irish Republic. They knew their chances of beating the British was slim and if caught their punishment would be brutal but still, their determination for an independent Ireland was strongly held.

The rebels took command of specific buildings across the city. They took over the GPO in O’Connell Street, which became their Head Quarters, and flew the new flag of the republic at full mast with the United Irishman flag replacing the British Union flag.

At 12:45, Padraig Pearse stood outside the GPO in Dublin city center with a single armed guard and read the Irish Proclamation of Independence. The Irish rebels had also attempted raiding the British arsenal in Phoenix Park and also Dublin castle and failed, but they did manage to cut British communications for some time. However, Dublin castle did get word to other forts and London for the need of reinforcements against the rebellion.

Many street battles were taking place with the Irish rebels being successful in their attacks but British presence was growing fast as troops had been drafted in from all surrounding areas. Casualties were high with over 200 British forces being killed in outposts manned by determined rebels.

By Tuesday over 4,000 British forces had moved into a strategic format around Dublin city attacking the rebel strongholds and secured Dublin Castle among other buildings. The British numbers grew and by Friday, approximately 20,000 men were fighting against the 1,600 Irish rebels.

On Saturday, a large artillery bombardment was started by the British destroying many of the public buildings in and around O’Connell Street where the GPO was located, it too was destroyed but was later restored.

James Connolly had already ordered the evacuation of the GPO through another building that was adjacent but that too was near collapsing. With a high number of civilian fatalities, the Irish leaders decided to surrender unconditionally knowing only too well they’ll face execution.

Executions of the 1916 leaders

London quickly set about punishing the Irish leaders with a court-martial deciding their fate, “execution” at Kilmainham Gaol in Dublin. The trials and executions were kept a secret from the Irish public and it was not long until all of the Irish leaders were dead. James Connolly had to be seated for his execution as he was badly injured and unable to stand.