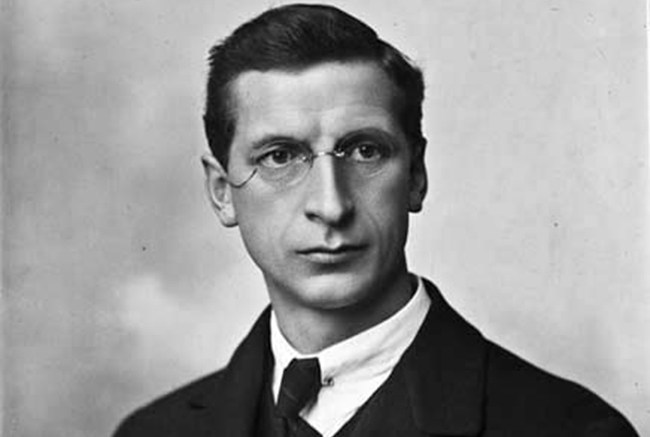 Éamon de Valera is the man who, more than anyone else, determined Ireland’s fate and character for most of the 20th century. He was an enigmatic character, some would say cold and aloof but undoubtedly charismatic, who rose from very humble beginnings to become president of the Irish Republic.

Born in New York on 14th October 1882, de Valera’s very beginnings are mysterious. His mother, Catherine (Kate) Coll, was an Irish immigrant from near Bruree in County Limerick who worked as a servant. His father, Juan Vivion de Valera, has been at different times, described as Cuban of Spanish descent, Argentinian, Basque and even as a Portuguese of Jewish descent. The couple was stated to have been married in St. Patrick’s R.C. Church in Jersey City, but neither church nor state authorities have any record of said marriage. Likewise, no certificate of birth can be found for Juan. The young Éamon’s original birth certificate was registered as George de Valero but this was changed legally in 1910 to Edward De Valera. The child, Éamon, was brought to Ireland by his maternal uncle Ned in 1885 after the death of Juan Vivion de Valera. His mother remained in New York and the child was raised by his grandmother in Bruree, where he was to be known as Eddy Coll. He attended the National School in the village and then later went to the Christian Brothers’ School in Charleville. After winning a scholarship at the age of 16 de Valera applied to the Jesuits for a place in their Limerick Colleges but was refused, he was however granted a place in Blackrock College in Dublin. Graduating from Blackrock in 1903, he was granted a position as a teacher of mathematics in Rockwell College in county Tipperary. In 1904 he graduated in mathematics from the Royal University (National University of Ireland post-1909) in Dublin.

In 1908, De Valera joined the Gaelic League (Conradh na Gaeilge) and this is where he was introduced to Sinéad Flanagan who in 1910 was to become his wife. The couple went on to have four sons and two daughters.

In 1913, De Valera joined the Irish Volunteers and he participated in the Howth gun-running incident in 1914. He was sworn into the Irish Republican Brotherhood, that secret inner grouping which controlled the Volunteers. As a member of the IRB, he became privy to the planning for an uprising. When the uprising finally took place in Dublin, on Easter Morning 24th April 1916, De Valera was Commandant in charge of the rebels in Boland’s Mill in Grand Canal Street. He held the distinctions of being the last commandant to surrender to the British and also to be the only one not executed by them. It is thought that the British General Maxwell let him live because he was an American citizen, but so also was Tom Clarke who had been executed. It may have been that the American Ambassador had brought pressure to bear and also the fact that the British had very little information on De Valera. Whatever the reason De Valera was sent imprisoned in England and later released in an amnesty in June 1917.

A move into politics

In July 1917, De Valera successfully stood as Sinn Féin candidate in the East Clare by-election. In the 1918 General Election Sinn Féin achieved a huge majority and immediately formed a separate parliament, Dáil Éireann, and reiterated the Proclamation Of Freedom that had been declared at the GPO at the start of the 1916 Easter Rebellion. Many Sinn Féin activists were rounded up and jailed. De Valera, by now elected president of Sinn Féin and of the Volunteers, was amongst them and again he was imprisoned, this time in Lincoln. In February 1919, De Valera escaped from this prison by using a duplicate key and on his return in April to Dublin; he was elected president of Dáil Éireann.

From June 1919 to December 1920 De Valera traveled America in an effort to raise funds and American acceptance for the Irish Republic. He did manage to raise some $5,500,000 but he also alienated a lot of the Irish Americans. In Particular the old Fenian John Devoy and the highly influential American born Judge Daniel Colohan was upset at his attempts to gain dominance over Irish affairs in America. On his return to Ireland, he found a country exhausted and reeling from vicious tit for tat killings during the Irish war for independence. By June 1921 both sides were exhausted and he was able to arrange a truce with the British General Sir Neville MacReadie that would result in the signing of the Anglo-Irish Treaty. During this truce De Valera had his presidency of the Dáil changed to President of the Irish Republic. By 1926 Eamon de Valera broke away from Sinn Féin and help start another Republican political party named Fianna Fáil.

To sum up, his life is a difficult thing. Like all humans, he was weak in many ways but he was also very single-minded in his pursuit of an Ireland, united, Gaelic and free. He had many admirers and many detractors, but they cannot deny his achievements. His speech, in reply to Winston Churchill’s verbal attack on Ireland after World War 2, is outstanding in its wisdom.

“It is indeed fortunate that Britain’s necessity did not reach the point when Mr. Churchill would have invaded Ireland. All credit to him that he successfully resisted the temptation which, I have no doubt, many times assailed him in his difficulties and to which I freely admit many leaders might easily succumbed. It is indeed hard for the strong to be just to the weak, but acting justly always has its rewards……..Mr. Churchill is proud of Britain’s stand alone, after France had fallen and before America entered the war. Could he not find in his heart the generosity to acknowledge that there is a small nation that stood alone not for one year or two, but for several hundred years against aggression; that endured spoliations, famines, massacres in endless succession; that was clubbed many times into insensibility, but that each time on returning consciousness took up the fight anew; a small nation that could never be got to accept defeat and has never surrendered her soul. Mr. Churchill is justly proud of his nation’s perseverance for freedom against heavy odds. But we in this island are still prouder of our people’s perseverance for freedom through all the centuries. We, of our time, have played our part in the perseverance, and we have pledged ourselves to the dead generations who have preserved intact for us this glorious heritage, that we too will strive to be faithful to the end, and pass on this tradition unblemished”