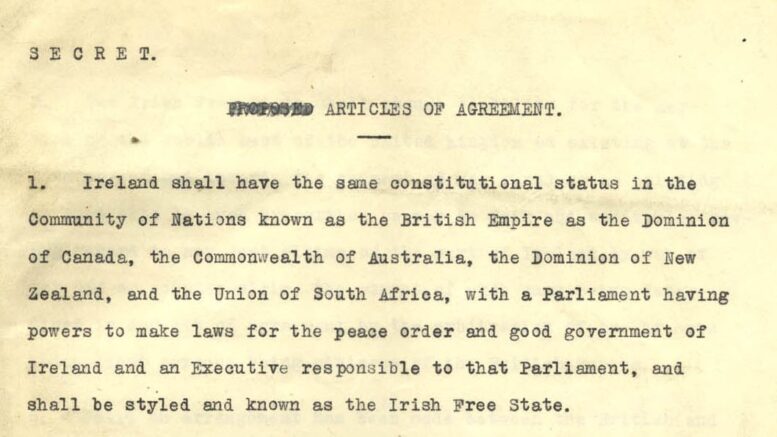 The Anglo-Irish Treaty was signed on 6 December 1921 in London between the British government and an Irish delegation. The agreement marked the end of the Irish War of independence that had started in 1919.

Before the Anglo-Irish Treaty

In 1920, during the War of Independence, the Government of Ireland Act not only established the new state of Northern Ireland but gave that state the right to opt-out of a future self-governing Irish Free State within the British Commonwealth of States.

The Northern state consisted of the 6 northeastern counties of Ulster with a unionist majority. They were, Antrim, Down, Armagh, Derry, Tyrone, and Fermanagh. Belfast city was to be the seat of a government and held limited devolved powers. The counties of Donegal, Cavan, and Monaghan would be absorbed within the Irish Free State controlled from parliament in Dublin.

Irish nationalists were dismayed with the plan. Protestant Unionists, particularly those living within the boundaries of the new state, accepted and started to implement the Act.

Sectarian attacks were launched upon Catholic homes in Belfast, Derry, Banbridge, Lisburn, and Dromore. Catholics were driven from Belfast shipyards and from various engineering works in that city. Supposedly these attacks were in revenge for IRA assassinations.

The truce before the Anglo-Irish Treaty

The IRA continued the campaign to establish a republic with the Irish War Of Independence.  By the middle of 1921, both sides were exhausted and a truce was called on the 9th of June.

In July of 1921, Eamon DeValera, the president of Dáil Éireann went to London to meet with the British Prime Minister, Lloyd George. They agreed an Irish delegation would go to London to discuss terms in the autumn.

DeValera himself didn’t attend. Future historians wondered if he knew they wouldn’t be able to negotiate a 32 county Irish Republic.

During the debate, Lloyd George insistent Ireland remain part of the Commonwealth and Dáil Éireann members to take the oath of allegiance to the British throne. After a delay of 2 months, Lloyd George delivered the ultimatum, sign a treaty within 3 days or there would be war.

The Anglo-Irish Treaty was to give Ireland a 26 county Free State with Dominion status. The right to raise taxes, regulate foreign trade, independence in internal affairs, own an army, and the oath of allegiance was changed to one of fidelity.

The British were to retain 3 naval bases within the jurisdiction of the Free State, at Cobh, Lough Swilly, and at Berehaven. The Northern Ireland boundary would be determined by a commission. subsequently, this gave false hope to large tracts of Tyrone, Fermanagh Down, Armagh, and Derry City, which would be given to the Free State as they had Catholic majorities.

The signing of the Anglo-Irish Treaty Just after 2 am on the 6th December 1921, the Irish delegation, without consulting the Dáil, finally signed a treaty with the British.

Collins wrote, prophetically, later on, the day of the signing

“early this morning I signed my death warrant”

The Treaty displeased the Catholics in the north and the unionists in the south. Meanwhile, many of those involved in the conflict were abhorred at the fact that not all of Ireland was to leave the United Kingdom.