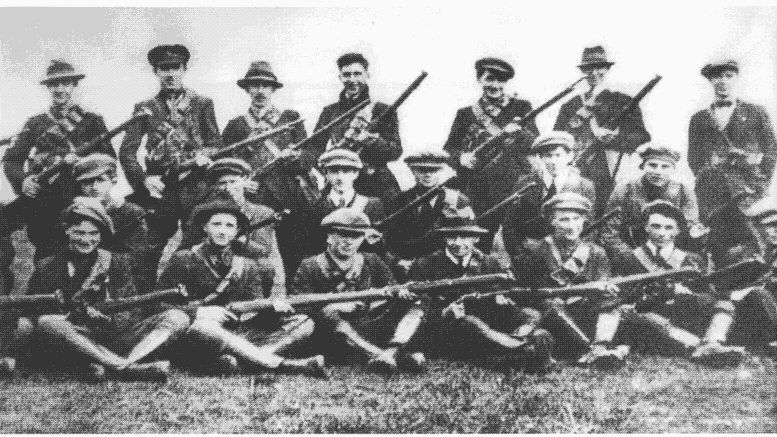 The Irish War of Independence occurred between 1919 – 1921. In December of 1921, the signing of the Anglo-Irish Treaty between the Irish and British governments concluded the Irish war for independence. The war resulted in over 2,000 deaths and the creation of the Irish Free State.

Before the Irish War of Independence

The nationalist population of Ireland had mostly turned against the British by the year 1918. This was inevitable due to the aftermath of the 1916 Easter Rising when the British resorted to punitive actions against known Irish Republicans.

Nationalists, of all hues, were horrified by the vengeful executions of the Republican leaders. Plus, with the British government’s cover-up of the murders of pacifist Francis Sheehy-Skeffington, two pro-British journalists, T. Dickson, and Patrick MacIntyre, a youth and a republican activist Richard O’ Carroll. Murders committed by Capt. J. Bowen Colthurst of the Royal Irish Rifles.

Anti-British feelings were also exacerbated by the reports of atrocities committed by the South Staffordshire Regiment during the 1916 Uprising. In addition, these feelings were furthermore inflamed by the attempt to bring in conscription when the Germans began their Spring offensive during the First World War.

The general election of 1918

It was no wonder then, that in the November 1918 general election, the people of Ireland voted en mass for Sinn Féin, giving them 73 seats out of 105. Unionists won 22 seats, plus 3 for labor Unionists and 1 independent Unionist. 6 Nationalists won the remaining seats.

The victorious Sinn Féin party immediately refused to take part in the Westminster parliament. They did, however, set up the first Dáil Éireann that met for the first time on 21st January 1919 in the Mansion House,  Dublin. This Dáil reaffirmed the 1916 Proclamation of Independence. They also reconstituted the Irish Volunteer Movement into the Irish Republican Army.

The start of the Irish War of Independence

On that very same day, the first act of war was committed. An IRA unit operating at Soloheadbeg in County Tipperary attacked and killed two RIC men escorting explosives. The unit was led by Seán Treacy and Dan Breen. Both men became famous guerilla fighters during the on-coming struggle.

As the year progressed there was an escalation of military action against the British administration and its mainly Catholic, armed police force, the RIC. Barracks were attacked throughout the country in a quest to obtain arms. RIC personnel was isolated from the community at large and a magistrate was killed in County Mayo.

There was, however, at the same time, a determined bid to build a state within a state. Sinn Féin set up an apparatus to wrest control of the country from the British by operating their own courts, etc.

Initially, the people were opposed to the violence whilst supporting the establishment of the new state. However, the reaction of the British was punitive, not to mention heavy-handed to the extreme.

The IRA, led by Michael Collins, was to develop an excellent intelligence service, reaching into the very core of British Authority in Dublin Castle. By using his spies, Collins identified and eliminated the RIC detective murder squad known as the G-men. In retaliation, the British Army started to imprison people on suspicion and without trial.

Ireland was in a bad way by the late 1920s. IRA flying columns (bands of up to 100 men) were operating in many areas. 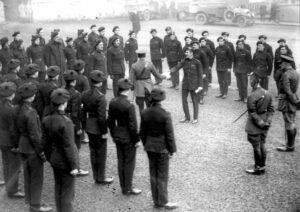 Winston Churchill persuaded the British to establish a force of approximately 10,000 ex-army personnel to augment the RIC. This force, under the command of General Frank Crozier, was to become known as the Black and Tans.

The Black & Tans were brutal. Given a free-hand by the British Prime Minister, Lloyd George, they went on to terrorize and murder many people. They burned homes, villages, towns, and even the center of Cork city. Their viciousness tarnished Britain’s reputation all over the world.

The Black & Tans in Ireland achieved very little except to galvanize Irish resistance to Britain and in reaction, IRA activity increased.

In November 1920, Collins issued orders to eliminate a British espionage unit of 14 men working in Dublin. British soldiers retaliated by opening fire at a football match in Croke Park stadium. They murdered 12 innocent civilians which became known as Bloody Sunday of 1920.

In December of 1920, the Government of Ireland Act was signed with the formation of Northern Ireland in 1921.

A truce on the Irish War of Independence

By mid-1921, British morale was at its lowest. World opinion was against them, their powerful forces in Ireland could not defeat the IRA, a much smaller and poorly armed army of mostly part-time activists.

The IRA was also exhausted, they were short on arms and ammunition but had a very effective propaganda machine and so on 11th July 1921 both sides called a truce and both sides were to enter into negotiations that would result in the Anglo-Irish Treaty being signed.