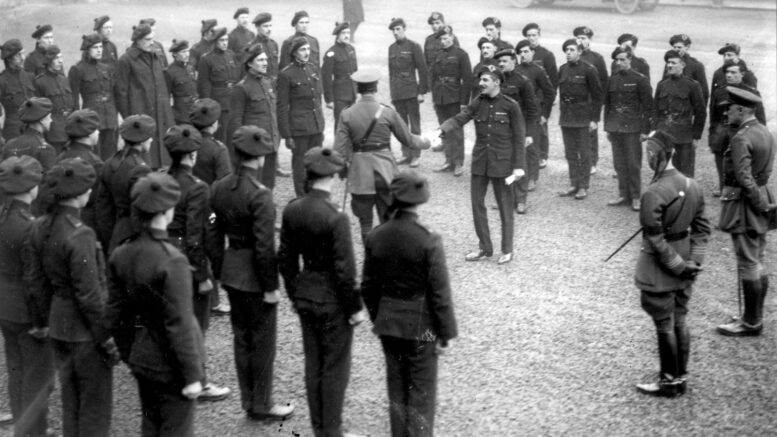 When Sinn Féin established Dáil Éireann and declared the independent Irish Republic they also called on a boycott of the RIC. The Irish war of independence erupted that year spiraling Ireland into a state of chaos.

IRA attacks against the British authorities, and particularly against the Royal Irish Constabulary (RIC), intensified forcing many policemen to resign through fear of assassination and social ostracism.  Large tracks of the countryside fell into the control of the IRA after the RIC abandoned their barracks.

The British Prime Minister, David Lloyd George, outlawed the Dáil Éireann and increased the number of British troops in Ireland.

The formation of the Black & Tans

The idea of recruiting reinforcements for the RIC came in 1919 when British Unionist politician, Walter Long, pitched the idea of using ex-servicemen from British forces who served in the First World War. The Lord-Lieutenant of Ireland, John French, and the Commander of the British Army in Ireland, Frederick Shaw, both agreed to the idea.

By January 1920 the recruitment drive for the Black & Tans began and over 10,000 men were recruited over a 2-year period. There was a shortage of RIC uniforms after a sudden surge of recruits attracted by a recent pay increase. Khaki trousers, dark green RIC tunics, caps, and belts were issued to new recruits. With mismatch uniforms, the new reinforcements became known as the Black & Tans.

Most Black & Tan recruits were only experienced from the battlefields of World War 1. They had no policing experience, except for 2 weeks of training at Gormanstown Camp near Dublin city.

Retaliation from the Black & Tans

After the killing of the first Back & Tan in County Kerry the beleaguered and now despised RIC retaliated by raiding the homes of Sinn Féin, IRA members, and supporters. Back & Tans all over Ireland increased their attacks on not only Irish Republicans, but also civilians. They besieged many towns, looting and burning homes or businesses, but also murdering civilians.

The British Government agreed to their reprisal attacks to persuade the Irish into not supporting the IRA.  This led to an increase in brutal attacks by the Black & Tans but also increased support for the IRA.

On 20th March 1920, a gang of men with blackened faces raided the home of the Lord Mayor of Cork Thomas Mac Curtain. They gunned him down in front of his family for being an IRA officer. The Coroner’s Court found the British Prime Minister, Lloyd George and members of the RIC guilty of wilful murder. The murder of Mac Curtain was ordered by District Inspector Oswald Swanzy who was also murdered in August 1920.

Atrocities of the Black & Tans and the Auxiliaries

Together the Black & Tans along with the Auxiliaries operated throughout most of Ireland committing many atrocities. They burned the center of Cork city, the town of Balbriggan among other towns and small villages. Such was their reputation that their very memory fills the Irish people with revulsion to this very day.

Their actions merely increased Irish resolve to obtain independence from Britain. Republican prisoners when on hunger strike. It culminated in the deaths of another Lord Mayor of Cork, Terence MacSwiney, Joe Murphy a Cork man born in the USA, and fellow Cork man Michael Fitzgerald.

On Sunday 21st November the IRA, led by Michael Collins wiped out the Cairo gang killing fourteen under-cover British agents operating in Dublin. The British retaliated by machine-gunning the players and spectators at a Gaelic football match in Croke Park killing fourteen civilians. They also beat three republican prisoners to death in Dublin Castle – these events would become known as Bloody Sunday of 1920.

The disbandment of the Black & Tans

After the Irish war of independence and the signing of the Anglo Irish Agreement, the RIC, the Black & Tans, and Auxiliaries were disbanded in 1922. Many of their officers retired before disbandment allowing them to take their government pensions. 126 members of the Black & Tans were killed between 1920 – 1922.

Feelings towards the Black & Tans still run deep to this day. In January 2020 the Irish Minister for Justice, Charlie Flanagan, proposed to host a commemoration service for members of the Royal Irish Constabulary (RIC) and Dublin Metropolitan Police (DMP). Public outrage led to many calling Flanagan to resign from his position.

The famous Irish Rebel song ‘Come out ye Black & Tans‘ reached number 1 in the Irish & UK iTunes music charts in January 2020. It also started gaining positions in the American and Austrian charts. The Wolfe Tones, the band performing the song, announced all proceeds are to be donated towards the homeless in Ireland and the Bush Fire tragedy in Australia.