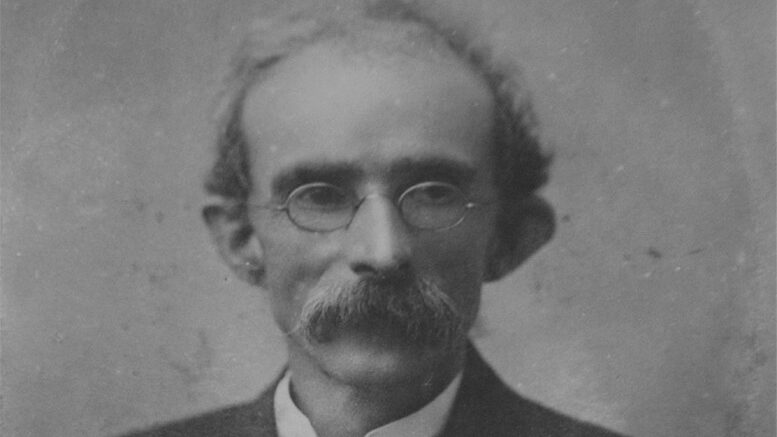 Thomas Clarke was a leading member of the Irish Republican Brotherhood and main planner of the 1916 Easter Rising alongside Seán MacDiarmada.

Thomas James Clarke was the second son of Sergeant James Clarke a Protestant Irish soldier serving in the British Army and Mary Palmer a Catholic from Tipperary. Thomas was born on the 11th of March 1857 in Hampshire, England. There is some confusion as to whether he was born at Hurst Park barracks on the Isle of White or at Hurst Castle on the Hampshire coast.

As he grew into young adulthood, Thomas seemed to develop an interest in Irish Nationalism, possibly from being influenced by the Fenian rebellion of 1867.

Dungannon was a town of sharp sectarian divisions and as Thomas was reared in his mother’s faith he may well have developed animosity towards things Unionist and British. It is known that when he was 21 years old he fell under the influence of John Daly a national organizer of the Irish Republican Brotherhood, and was sworn into the Brotherhood by Daly.

In 1880 it is reported that he was active in riots in Dungannon after which he decided to emigrate to America. In New York, he joined the Napper Tandy Club, a branch of the Clan na Gael movement. This movement was the operation stage for Fenian leaders, O’ Donovan Rossa, John Devoy, and Thomas Clark Luby who had been released from prison and exiled by Gladstone in 1871.

In 1883 Thomas Clarke was ordered to England with others, to participate in a dynamiting campaign. He was given the “Nom de Guerre” Henry Hammond Wilson. During a raid on a suspect, the British Special Branch detectives found Henry Wilson’s name and address in an uncoded letter and arrested Clarke and a colleague called Gallagher. They apprehended a large number of explosives. Clarke and the rest of the conspirators were given life sentences. Clarke wrote about his experiences in prison.

In 1898 he was released and he returned to the U.S.A. chastened maybe but more determined than ever to liberate Ireland from the British. In 1899 he was granted American citizenship but by 1905 he was back in Ireland.

He opened a newsagency/tobacconist shop on Parnell Street in Dublin and began organizing again for the Irish Republican Brotherhood.

By 1915 Clarke had been elected to the I.R.B Supreme Council and was instrumental in forming their Military Council. All of his tireless organizing pointed in one direction and he played a leading role, if not THE leading role, in planning the Easter Rising of 1916.

Clarke was instrumental in bringing James Connelly and his Citizens’ Army into the planned rebellion for Easter Sunday in 1916. It is a testament to his endeavors and the respect he commanded, that his signature was the first of seven on the Proclamation of the Irish Republic which was read out on the steps of the G.P.O. in Dublin on Easter Sunday 1916.

During the Rising, Clarke fought in the G.P.O. and was afterward court-martialled by the British and sentenced to death. On the 3rd of May, he was executed by firing squad in Kilmainham jail. He left behind his wife Kathleen (née Daly) and sons John, Thomas, and Emmett.

The Book of Kells