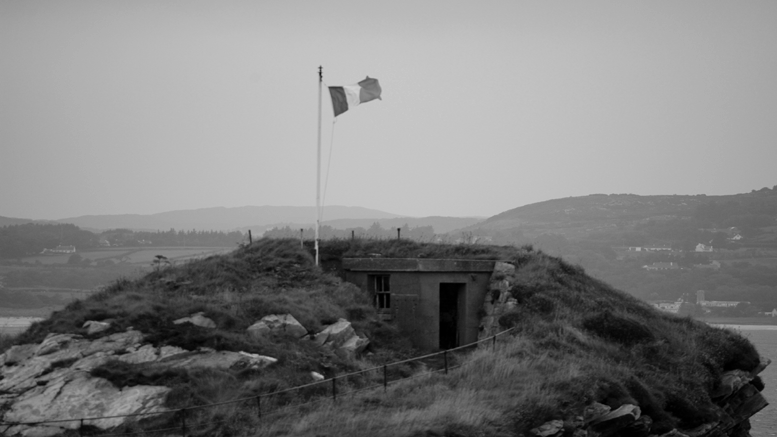 During the 1930’s Europe was inching steadily towards war. The fascist states of Germany and Italy were in the process of expanding their empires. Stalinist Russia was in lock-down. The western democracies were in danger and the path to war seemed unstoppable.

In Ireland, Eamon de Valera had been gradually removing all vestiges of British imperialism from the Irish Free State.  A new constitution for the country was introduced which was now officially Éire, a Gaelic word meaning Ireland.

The country was to all extents and purposes now an independent republic rather than a commonwealth dominion. When de Valera stopped payments of land annuities to Britain, there was the retaliatory imposition of duties on Irish imports to Britain.

By 1939 however, the animosity between Ireland and Britain had cooled down to such an extent that the British gave back the so-called “treaty ports” of Lough Swilly, Berehaven, and Cobh along with the oil storage facilities at Rathmullan and Haulbowline.

Just as De Valera was pulling Ireland away from British influence he was also in the process of isolating Ireland from other foreign influences. His party, Fianna Fáil had never gone down the path of fascism as had many in the pro-treaty parties. To all extents and purposes, de Valera was an isolationist, and a protectionist in that his Ireland was one of home and church (Catholic), trapped in a traditionalist and mythic Gaelic past. It was an idealistic vision of Ireland and one that had many adherents.

The outbreak of World War II

In approaching the outbreak of World War II, it must be accepted that British excesses during the war of independence of 1919-1922 were still very strong in the nation’s memory. The fact that Ireland was partitioned was also an open sore; however, it was one that de Valera was willing to put up within the meantime.

In the event, the day after Britain declared war on Germany, de Valera made it clear that Ireland would not be coerced into taking sides by either the Allied powers or the Axis powers.  Ireland would be neutral and in this, he was supported by the vast majority of Irish people. He did, however, recognize that a neutral country could also be invaded. In view of that, he agreed that if the Nazis did invade British troops would be invited in to help repel the invaders.

De Valera’s neutrality was not absolute. He allowed Irishmen to freely join the Allied armies and up to 40,000 did along with many thousands of northern Catholics and Protestants. Another 200,000 civilians crossed over to Britain to work in the mines and factories. Many were also conscripted into the British forces.

German prisoners in Éire, seamen, pilots, etc were hunted down and imprisoned. Headlands around the Irish coasts were numbered and highlighted in order to aid Allied navigators. During the Belfast blitz, de Valera allowed the southern Fire Service to cross the border to give assistance. In the latter part of the conflict, the RAF was allowed to erect radar posts on Irish territory.

Another move made by de Valera was the introduction of internment without trial. He knew that the IRA could sour things up so he moved against them to such a degree that the organization was broken. During these times six IRA men lost their lives on the gallows.

One criticism of de Valera is that in April 1945, he approached the German Ambassador to offer his condolences on Hitler’s death. In his defense, it must be said that he was following protocol and it was a repeat of his visit to the American Ambassador earlier in the month when Franklin D. Roosevelt passed away.