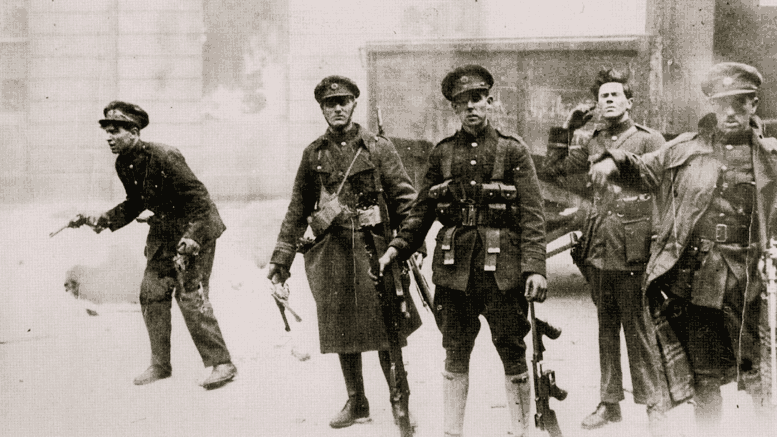 With the ratification of the Anglo-Irish treaty of 1921 by Dáil Éireann, albeit by a very small majority, the seeds of the civil war were sown. The Treaty accepted the de facto partition of Ireland into a 26 county Free State with Dominion status and a 6 county Northern Ireland with a limited degree of home rule by a Belfast Parliament, dominated by Protestants and under the aegis of the British parliament at Westminster.

The treaty had fallen short of the 32 county republic which the IRA and Sinn Féin had fought for and many could not bring themselves to accept it.

Éamon de Valera resigned as President of the Dáil and then re-stood as an anti-treaty candidate in the election which followed. He lost out to Arthur Griffiths and he, with Erskine Childers, Countess Markievicz, Cathal Brugha, and Austin Stack walked away from the Dáil.

The beginning of hostilities in the Irish Civil War

In the north, both sides of the IRA co-operated in the defense of the Catholic (nationalist) ghettos of Belfast and Derry which were being attacked by Protestant militants. They were also raiding deep inside the territory of the new northern state in an endeavor to win as much territory as possible from unionist control. Elsewhere in the country, the differences of opinions between pro and anti-treaty forces were becoming increasingly bitter. In April 1922, Republican Irregulars seized the Four Courts in Dublin and began to occupy other bases that the British Army was pulling out of. Collins, unable to reach a settlement with the Irregulars and faced with increasing pressure from the British, finally gave the order to bombard and seize the Four Courts in late June. It was the opening of hostilities in the Civil War.

The war was not fought by two armies coming straight at one and other, but as a Guerrilla War of hit and run tactics. There were many acts of revenge carried out by both sides. Cathal Brugha was killed in July on O’Connell Street as Free State forces attacked a hotel that he had seized after being driven out of the Four Courts. On the 12th August Arthur Griffith, whose health had been failing died and ten days later Irregulars ambushed and killed Michael Collins in his home county of Cork.

A war of Brother against Brother

William Cosgrave assumed the role of President of the Dáil and Chairman of the Provisional Government. He realized that in order to defeat the Irregulars, who were following a policy of murdering members of the Free State judiciary, police force and Dáil Éireann TD’s, he would need to be ruthless in order to defeat them.

When TD Seán Hale from West Cork was assassinated in Dublin on the 7th December 1922, the very next morning Cosgrave ordered the execution of four men who had surrendered in June when the Four Courts fell. They were Liam Mellows, Joseph Mc Kelvey, Richard Barrett and Rory O’ Connor, each a representative of a province. The month previous, Erskine Childers had been executed for possessing a pistol when he had been captured in County Wicklow.

There were executions of groups of Irregulars captured in Ballyseedy and Killarney in County Kerry, and at Drumboe near Ballyboffey in County Donegal. This barbarism was to be reflected all over the 26 counties. Both Free State and Irregular forces engaged in the most horrible of crimes, the killing of their own people, at times of their own comrades, their own family members. It has been described as a war “brother against brother”.

The defeat of the Irregular forces

Finally, the Irregular forces were forced to admit defeat. Not only had they to battle a ruthless Free State Army that was much better armed, but the majority of the ordinary people were content to give the Provisional Government its support. On 24TH May 1923 de Valera issued a call to lay down arms.

“Soldiers of the Republic: Legion of the Rearguard. The Republic can no longer be defended successfully by your arms. Further sacrifice of life would now be in vain and the continuance of the struggle in arms unwise in the national interest and prejudicial to the future of our cause. Military victory must be allowed to rest for the moment with those who have destroyed the Republic.”

As Director of Operations of the anti-treaty side, Eamon de Valera was apprehended and imprisoned. He was released in 1924 and decided to break away from Sinn Féin along with others such as Countess Markievicz and Seán Lemass to form the new political party Fianna Fáil in 1926.