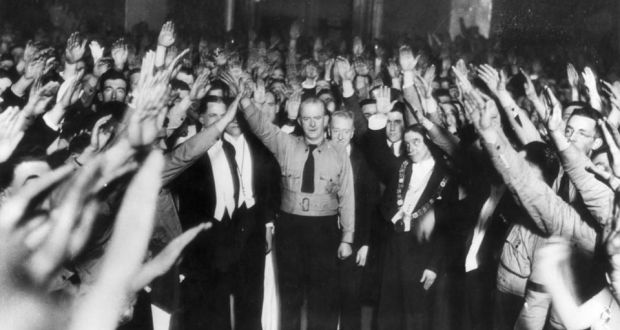 Following the civil war, the Irish Free State was governed by the pro-treaty parties the largest of which was, Cumann na nGaedheal, from 1923 to 1933. This was the party of William T. Cosgrave, a veteran of the Easter Rising and Minister of Local Government in Dáil Éireann from 1919 to 1922.

The Labour Party, founded by Connolly and Larkin in 1912, was recognized as the Official Opposition.  The anti-treaty groups, still operating under the umbrella of Sinn Féin, remained out of the Dáil as refusing to swear the oath of allegiance (Fidelity) to the British sovereign.

Cosgrave had accepted the idea of permanent partition by allowing the Boundary Commission to fail and whereas William Craig the Prime Minister of Northern Ireland had managed to negotiate an end to the payment of annuities to Westminster, Cosgrave had failed to do so. Added to this there were many in the Free State army who also hankered after the idea of a republic as promised by Michael Collins.

In social policy, the Free State government failed singularly to alleviate hardship for working-class people. In order to meet fiscal targets, old age pensions were cut and unemployment benefits were kept to a minimum. Poverty was endemic, especially in rural areas. These matters were highly instrumental in diminishing popular support for the government.

Eamon De Valera, as leader of the anti-treaty forces, quickly recognized Cosgrave’s weaknesses and in typical Machiavellian fashion, set about persuading Sinn Féin to adapt to constitutional politics. Of course, this was to split the ant-treaty forces into those who wished to continue abstentionist policies or military actions from those prepared to enter the Dáil. To facilitate the latter, De Valera launched a new party Fianna Fáil (soldiers of destiny) in 1926 which was able to contest the 1927 general election securing 44 seats against the government’s 47 seats.

Declaring the Oath of Fidelity to be nothing more than an empty formula, Fianna Fáil took their seats for the first time.

By the time the next general election was called in 1932, Fianna Fáil had organized throughout the 26 counties and approached the election with promises of the abolition of the Oath, the reduction of powers of the Governor-General, the provision of new homes and industrial development amongst other things.

Cumann nanGaedheal had failed to organize and Cosgrave fought the election mainly on his record of having provided stability, however, the country was still mired in poverty that was exacerbated by the international depression. The election resulted in a defeat for Cumann na nGaedheal. They took 57 seats as opposed to Fianna Fáil which had 72.

Cosgrave recognized his failure his party was a major factor in its defeat and he set about making alliances with the smaller anti-treaty parties such as The National Centre Party (The Farmers and Ratepayers Party) which held 11 seats in the Dáil and The National Guard (the Blueshirts or The Army Comrades Association) which was a security organization dedicated to defending Cumann na nGaedheal members from IRA attacks. This new alliance of parties officially took the name United Ireland Organisation in September 1933 but soon metamorphized into Fine Gael (family of the Gael) with Eoin O’ Duffy as the leader.

O’ Duffy who had been Garda Síochána Commissioner under Cosgrave was dismissed from office by De Valera on the grounds that he would be biased in his attitude to the new government on account of past political affiliations.

O’ Duffy was replaced as leader of Fine Gael in 1934 after he suddenly resigned.