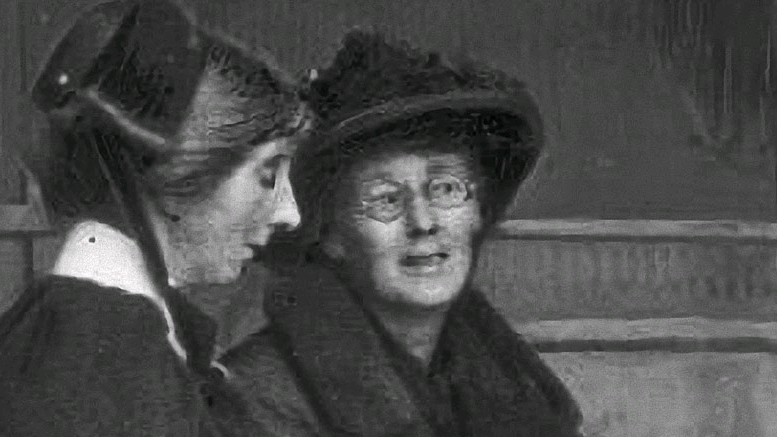 The Countess Constance Markievicz is an iconic figure in Irish nationalist and republican myth.

She was born into a wealthy Protestant Anglo-Irish family, the Gore-Booths, whose estates were at Lissadell in County Sligo. She and her younger (by 2 years) sister Eva led a very privileged childhood filled by private tutelage, horse riding, and shooting.

In 1887 Constance and her sister were presented to Queen Victoria. Constance then attended art classes at the Slade School of Fine Art before moving on to Paris in 1897 to study at the Julian School. It was in Paris that she was to meet her future husband, Count Casimir Dunin Markievicz, a Polish Catholic with estates in Ukraine. Casimir was already married but his wife was ill and passed away in 1899. Constance and Casimir were married in 1901 and the union was to produce a daughter Maeve Alys. Casimer already had a son, Stanislas, to his first wife.

In 1903 the couple moved to Dublin and were prominent in artistic circles, she herself being something of a talented landscape artist. Casimir and Constance were to leave their daughter, Maeve, in the care of her Grandmother, Lady Gore-Booth.

Around this time, Constance was to develop an interest in politics and influenced by nationalist, feminist and socialist activists she was to join Maud Gonne in founding the revolutionary movement Daughters of Ireland (Inghinidhe na hÉireann).

In 1908 Constance was to join Sinn Féin and in 1909 founded the republican boy scouts, Fianna Eireann. She was also involved, with her sister Eva, Esther Roper, Adela Pankhurst and other suffragists, in 1908 in Manchester, in campaigning, successfully against Winston Churchill in the Manchester North West parliamentary by-election.

Again in 1911, she campaigned against King George V when he visited Ireland. She participated in throwing stones at the King’s portrait and in burning the Union flag which flew from Leinster House. With James Larkin, James Connolly and Maud Gonne, the Countess was to campaign to extend the 1906 Provision of School Meals Act to Ireland.

During the Lockout of 1913, Markievicz ran a soup kitchen at Liberty Hall to help feed the workers and their families who could not afford to buy their own meals, and when James Connolly formed the Citizen’s Army in response to the employers’ use of violence, the Countess was to join and was given the rank of staff lieutenant. She was also a member of Cumann na mBan, the women’s branch of the Irish Republican Army.

At the onset of the First World War, Casimer left Ireland to take up a position as a war correspondent in the Balkans. His son was also to return to Ireland and by this time Constance had become estranged from her daughter who was at Lissadell.

In 1916, during the Easter Rising, Markievicz was active as second-in-command to Michael Malin at St. Stephens Green. For this, she was court-martialed and condemned to be shot but with a recommendation for mercy solely on account of her sex. British propaganda at the time put it about that she pleaded for her life but official records report that she acted with courage and dignity at all times. Her sentence was commuted to penal servitude for life because of her sex.

Countess Markievicz served 18 months in prison, in Ireland and in England where she was treated, in the words of a parish priest, “with exceptional severity” and was freed under amnesty. She was never to forgive Eoin O’ Neill, the Irish Volunteers’ Chief of Staff who tried to stop the rebellion.

After gaining her freedom she was to stand as a Sinn Féin candidate in the 1918 general election. She was to make British parliamentary history as the first-ever woman to be returned to the House of Commons. She did not take that seat but instead entered Dáil Éireann, serving as Minister of Labour.

During the War of Independence, Markievicz was jailed twice by the British. She opposed the signing of the Anglo-Irish Treaty and regarded those who supported it as traitors. As the leader of Cummann na mBan, she sided with the republican side and participated in the early fighting.

In the general election of 1923, she was again elected to the Dáil but would not take her seat. The Free State government arrested her and put her in prison for campaigning for the release of republican prisoners. However she and 92 other female prisoners went on hunger strike and the government, embarrassed, was forced to release them.

The later years of Markievicz

The rest of her life she spent working among and for the poor in Dublin. She joined the new Fianna Fáil Party in 1926 along with Eamon de Valera and in the general election of 1927, she successfully regained her seat in the Dáil. Later in the same year, she died of cancer in a public ward and over a quarter of a million people lined the route of her funeral.

It must be said that Countess Constance Markievicz was supported in her choices to fight for her country and its people by her sister Eva and her friend, Esther Roper.

Of all her family, it was Eva and Esther who would fly to her side when she had been condemned to death and when that sentence was commuted who would stand by her whilst she was in prison.

The Fight for Catholic Emancipation