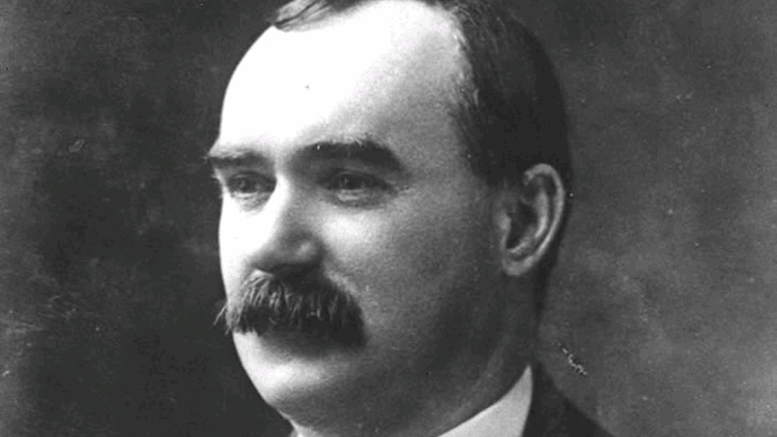 James Connolly was born in Edinburgh’s Cowgate area in the parish of St. Patrick’s, on the 5th June 1868. His parents, John and Mary were Irish Catholic immigrants who originally came from County Monaghan.

Connolly was born into deep poverty, his father worked as a dung collector on the Scottish capital’s streets whilst his mother, Mary, was a domestic servant. The young Connolly left school at the age of ten to work as a laborer in a print shop.

When he was just 14 years old he forged both his age and his name to join the British Army. He used the surname Reid. The army sent him to serve in Ireland and it is believed that his service was spent in the southeast of the country. During this time he was to meet his future wife and life-long companion, a Protestant girl called Lillie Reynolds.

Connolly’s service in the army enabled him to witness how the British and the landlords mistreated the poor and dispossessed Irish. He deserted the army in 1887 and returned to Scotland in 1888 taking Lillie with him. They were married in Perth in 1889, using his true surname Connolly.

In Scotland, Connolly became involved in the Socialist and Keir Hardy’s Independent Labour movements. He was also the editor of the newspaper “The Socialist”. In 1896, Connolly was to return to Dublin, at the behest of the Scottish socialist John Leslie, where he took on the job of organizing the Dublin Socialist Club into the formal Irish Socialist Republican Party. He also founded and edited the newspaper “The Workers Republic”. He also began his career as a prolific writer of political pamphlets and books.

Socialist Party of Ireland is founded

In 1903 Connolly, with his wife and children emigrated to the U.S.A. There he became a member of the Socialist Labour Party and the Industrial Workers of the World movement. He was also the founder of the New York Socialist Federation. In 1910 he returned to Ireland where he found that his Irish Socialist Republican Party had fallen by the wayside. Immediately he went to work and organized the Socialist Party of Ireland.

He also joined the Irish Transport and General Workers Union which had been founded in 1907 by James Larkin. In 1911 Larkin was to appoint Connolly as the organizer of the ITGWU in Belfast. The two men then went forward to found the Irish Labour Party in 1912. They intensified their efforts to organize and unionize the Irish working man and in 1913 they locked horns with the employers in what has become known as the Great Lock-out. This dispute, which lasted from 26th August 1913 to 18th January 1914, was the most severe confrontation between Bosses and Workers that Ireland had ever experienced.

In 1914, as a response to the Great Lock-out Connolly founded the Irish Citizens’ Army in order to protect workers against armed gangs financed by the employers. In the run-up to the Great War, 1914-1918, many Irish Nationalists, including members of the Irish Volunteers, were willing to give their support to the British in the mistaken belief that they would gain Home-Rule later. Connolly rejected this and instead had his ICA became markedly more militant by parading through Dublin’s streets. This, in turn, alarmed those members of the Irish Volunteers, the Irish Republican Brotherhood (IRB) and Sinn Féin who were also disinclined to believe British promises of future self-rule. Indeed they were planning a rebellion for Easter 1916 and decided to take Connolly into their confidence, even appointing him Military Commander of Republican Forces in Dublin.

The execution of James Connolly

As the rebellion got under-way, Connolly, a signatory of the “Proclamation of Independence”, was in command of the GPO, the military headquarters of the rebels. During the fighting, he was severely wounded.

When the Irish rebels surrendered, Connolly was captured, tried in a hospital, and shot strapped to a chair. On the eve of his execution James Connolly, Commandant-General, Dublin Division, Army of the Irish Republic wrote to the Field General Court Martial, held at Dublin Castle on 9th May 1916

“ We went out to break the connection between this country and the British Empire, and to establish an Irish Republic. ….We succeeded in proving that Irishmen are ready to die endeavouring to win for Ireland those national rights which the British government has been asking them to die for Belgium. As long as that is the case then the cause of Irish freedom is safe”