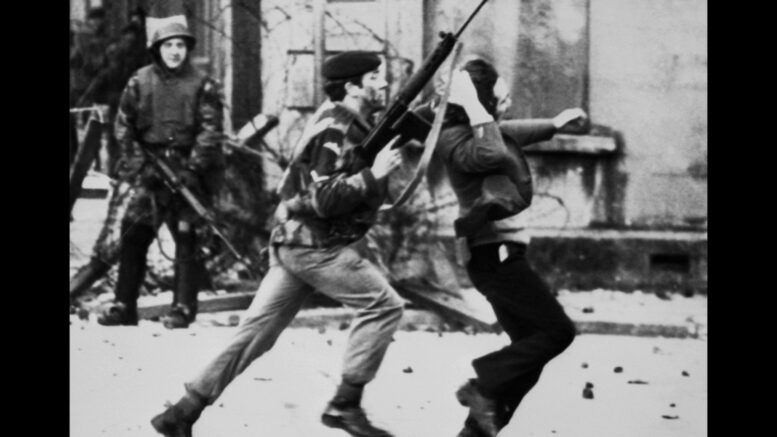 Bloody Sunday occurred on January 30, 1972, in the city of Derry when the parachute regiment of the British army opened fire on a Civil Rights march killing 13 people, another victim died later from his wounds.

By 1969 Northern Ireland was spiraling out of control and rioting became more fierce such as The Battle of Bogside. In response to the unrest, the British decided to deploy the British army onto the streets under Operation Banner. At first, Irish Nationalists welcomed the arrival of the new troops thinking their communities would be protected from Loyalist mobs and a sectarian police force. Their welcome was very short-lived.

The Civil Rights March of January 1972

The Northern Ireland Civil Rights Association (NICRA) organized a march to start at 3 PM from the Bishops Field area of the Creggan on Sunday 30 January 1972.

The authorities banned the rally but despite this their decision was ignored by thousands of protesters. Due to a previous Civil Rights march being attacked at Burntollet by police and Loyalist mobs the January 30 rally was expecting a similar occurrence.

The plan by NICRA was to have the march on Jan 30 start from the Creggan estate, make its way down to the Guildhall Square via William Street walk.

Sunday was just like any normal Sunday, people dressed for church and afterward sat down for family dinner. Once dinner was finished people made their way to the Bishops field in Creggan. Approximately 10,000 – 15,000 people joined the rally and stated by many everyone was in good spirits and it was a carnival-like event.

The British army, heavily armed and prepared, blocked the parade from making its way to the Guildhall Square. They blocked Williams Street with barbed wire and armored vehicles.  The parade organizers decided to divert the rally from William Street and into the Bogside to the Free Derry Corner.

The trouble begins at the army barricades

A number of youths broke away from the main march that was turning into Rossville Street. They hurled abuse at the British troops along with stones and in turn, the troops fired back with rubber bullets, tear gas and a water cannon. Skirmishes between the youth and army weren’t uncommon so nobody was surprised when they heard some stone-throwing at the army was taking place. The majority of the parade-goers ignored what was going on in William Street and continued to follow the rally towards Free Derry Corner.

The somewhat small riot in William Street was a typical affair often seen in various areas. The army would stand firm at their barricades and youths would throw stones and bricks at their lines. CS Gas was deployed and filled the air around William Streets.

The air in William street was full of C.S. gas, people made their way to the meeting point at Free Derry Corner to avoid the confrontation at the barricades but it was then they heard the distinctive sound of the armored Saracens.

Within a matter of minutes, the British Paratroop Regiment jumped from their  Armored vehicles and opened fire into the fleeing crowds. They gunned down unarmed civilians, most of who had their back to the soldiers as they tried to run.  Statements from witnesses described how the Paratroopers fired indiscriminately into the crowd.

One eyewitness statement was from Father Edward Daly, a highly respected priest who went onto become the Bishop of Derry.

“It was utterly disgraceful. They were firing lead bullets in all directions. There was nothing fired at them, I can say that with absolute certainty because I was there. The people were running in all directions. Most of them had their backs to them and they just opened fire.”

As Father Daly and 17 years old Jackie Duddy tried to flee from the violence Duddy was killed instantly after being shot from behind. A number of eyewitnesses state the Paratrooper took up firing position and shot Jackie from behind.

The iconic footage of Father Daly waving a blood-stained white handkerchief escorting one of the fatally injured past British troops reflected how bad the situation had become in Northern Ireland and would fuel anger for many generations.

When the shooting stopped 26 unarmed civilians were shot. 13 were killed instantly and John Johnston would later die from his injuries.

The events of that day had been caught on camera by the press who had witnessed the tragedy first hand. Images sent shock waves around the world and also seen the fall of the Northern Ireland parliament, Stormont. Direct rule from England was brought in after the events of Bloody Sunday and the British Government set-up the Widgery Tribunal to find out about the events of that day. The tribunal was quickly seen as a farce with many of the facts & statements being overlooked.

The people of Derry never accepted the Widgery Tribunal and every year since 1972 they marched the same route as those did on Bloody Sunday.

“that a Tribunal be established for inquiring into a definite matter of urgent public importance, namely the events on Sunday 30 January 1972 which led to loss of life in connection with the procession in Londonderry on that day, taking account of any new information relevant to events on that day.”

The firing by soldiers of 1 PARA on Bloody Sunday caused the deaths of 13 people and injury to a similar number, none of whom was posing a threat of causing death or serious injury.

British soldiers had concocted lies in their attempt to hide their acts.

No stones and no petrol bombs were thrown by civilians before British soldiers shot at them, and that the civilians were not posing any threat.

After the publishing on the report the new British Prime Minister, David Cameron, stated in the House of Commons

Mr Speaker, I am deeply patriotic. I never want to believe anything bad about our country. I never want to call into question the behavior of our soldiers and our army, who I believe to be the finest in the world. And I have seen for myself the very difficult and dangerous circumstances in which we ask our soldiers to serve. But the conclusions of this report are absolutely clear. There is no doubt, there is nothing equivocal, there are no ambiguities. What happened on Bloody Sunday was both unjustified and unjustifiable. It was wrong.

The aftermath of Bloody Sunday

The events of Bloody Sunday is seen as one of the biggest political and military blunders the British ever made in Ireland. The result turned hundreds, if not thousands, of young men from all over Ireland to join the IRA. This would result in taking Northern Ireland into a bloody 30-year conflict.