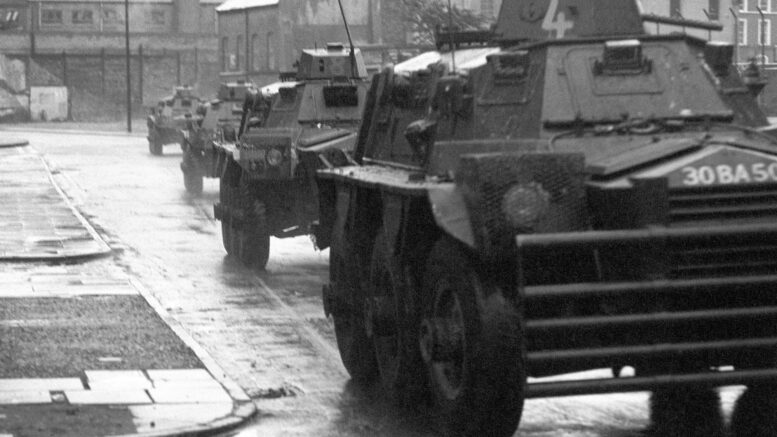 In the summer of 1969, the British government invoked Operation Banner, the deployment of troops to Northern Ireland. What was supposed to be a “limited operation” to restore law and order, it became the longest continuous deployment in the history of the British military.

Northern Ireland at the brink of collapse

After intense rioting for over 3 days at the Battle of the Bogside the resources of the badly equipped police force had been exhausted. The Northern Ireland government deployed the B-Specials, an all-Protestant militia, to help replenish the police but this would only lead to further violence.

The Irish Government in Dublin deployed Irish troops to the Derry/Donegal border to provide aid for those injured in Derry, a move feared by Unionists.

The arrival of British troops

Within a matter of hours of Clarke’s request 300 troops from the 1st Battalion, Prince of Wales’s Own Regiment of Yorkshire was deployed to Derry. Their arrival was greeted by cheers from Catholics who believed they’d won in bringing down the Northern Ireland government.

Thousands of soldiers arrived in Belfast and were generally welcomed by both sides.

Catholics believed it was the end of the Unionist Government and that the troops would protect their communities from attacks by loyalist mobs and the sectarian police force. On the other hand, however, the Protestant community believed the British army would protect them from the IRA and that they would also strengthen the border with the Irish Republic.

Within a matter of weeks of the British army being deployed on the streets, the relationship between them and the Catholic community turned sour. Catholics realized the army wasn’t deployed to protect them and often enough, the British army sided with the Unionists and Loyalists groups.

As part of Operation Demetrius in August of 1971, the British army performed house raids on Catholic homes in an attempt to locate IRA members. Raids were often met with brutality from the troops, families reported being assaulted and often tortured when arrested.

Violence broke out all over Belfast and Derry with communities building barricades to keep out anyone who they feared from attacks. In the city of  Derry, barricades were built in the Bogside, known as Free Derry, and Creggan estate which became a no-go area for British troops and police.

The surge of violence peaked when SAS troops from the British military were deployed in the streets of Derry in 1972. On Sunday, January 30th, 1972 the 1st Parachute Regiment of the British Army drove into the barricades of Free Derry and opened fire on a Civil Rights demonstration, within a matter of minutes 13 civilians were shot dead and one civilian later dying from his wounds. This day became known as Bloody Sunday and would be the start of a long and bloody conflict.

The end of Operation Banner

In the summer of 2007, Operation Banner came to end, nearly 40 years after it had started. More than 300,000 British soldiers served in Northern Ireland during Operation Banner, 500 troops were killed and the army itself was responsible for over 300 deaths, most of which were civilians.