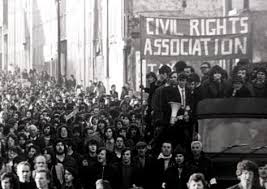 Following the formation of the Northern Ireland Civil Rights Association (NICRA) in 1967, the reaction of the Unionist Government was quick and predictably negative. Terence O’ Neill, the aristocratic prime minister of Northern Ireland, was trying in his own way to ease in reforms that would upgrade the status of the Catholic/nationalist minority. However, he was, on one hand, being undermined by the more obstinate members of his government and supporters of Ian Paisley whilst nationalists saw him as affable but rather ineffectual.

Many members and supporters of NICRA began to emulate the tactics of those Civil Rights campaigners in the USA by organizing street marches. Protests began all over Northern Ireland, particularly west of the Bann where unionists were a minority that controlled most of the councils.

The march for Civil Rights in Northern Ireland

On 5th October 1968, a march was planned in the city of Derry. It was banned under the Special Powers Act by William Craig, the hard-line Minister of Home Affairs. He had the excuse that Protestants had also applied to counter demonstrate on the same day. NICRA determined that they would not call off the march. To uphold the ban of the civil rights march, the Royal Ulster Constabulary, using water cannons and batons, viciously attacked the protesters, many of whom were prominent politicians. The protest degenerated into full-scale rioting in the nationalist Bogside area of Derry as the RUC attempted to subdue the area.

Unfortunately for the Northern Ireland Government, there were some journalists and film crews attending the march and within a few hours pictures of the scene were shown on televisions all over the world, causing extreme embarrassment to the Westminster Labour government of Harold Wilson.

Terence O’ Neill was summoned to London and castigated for his inept handling of the situation. In December 1968 O’ Neill brought into play a number of reforms which he thought that the Catholics and nationalists would accept however the demand of “one man “one vote” was not included.

NICRA decided to give O’ Neill sometime and called off the street marches many of which were being attacked by extreme Protestants fired up by Ian Paisley, a fire-brand fundamentalist preacher. Many people, however, felt that the protests should not be allowed to lose their impetus, particularly the student activists and academics of Queens University, who had formed the Peoples’ Democracy movement after the Derry debacle.

The attack at Burntollet bridge

The Peoples’ Democracy movement planned another protest march for New Year’s Day 1969, this time from City Hall in Belfast to Derry, a distance of 75 miles. From the very start, they were harassed by hard-line unionists. The march was not banned and should have been protected by the Royal Ulster Constabulary (RUC) but it was obvious that many of that force were in sympathy with the hardline paisleyites.

All along the route, the marchers had to endure the bigoted hatred of counter-demonstrators. As the march neared Derry they were led by the police, into a trap at Burntollet. Here the Protestants, many of whom were later identified from photographs as members of the B-Specials, had arranged huge heaps of stones and empty bottles. Armed with cudgels they attacked the unresisting marchers whose RUC protectors failed totally to uphold the law.

When the marchers finally reached Derry they were given a rapturous welcome by the nationalist people of the city. As the evening progressed the police attacked the Bogside, a predominantly Catholic area, assaulting its people and singing sectarian songs.

O’ Neill, instead of criticizing those responsible for the assaults now turned his fire against the extremism of Republicans, radical socialists, and anarchists. He proposed to call up the B-Specials for duty and praised the RUC for their handling of a difficult situation. Again he was at variance with British, Irish and other national press representatives who were at the march.

Northern Ireland was more polarised than ever before. Derry’s Bogside isolated itself from the Northern Ireland state and took the name Free Derry. Barricades were erected, illegal radios broadcasted and RUC incursions were driven back.

O’ Neill, now a desperate man, beset by enemies on all sides was forced to call a general election in February 1969. Although he was reinstated as Prime Minister the election showed that there was a huge split in the unionist camp and that nationalists did not give him much support either. In April he was forced to grant one man one vote for local elections. The parliamentary unionist party accepted this reform by 28 votes to 22 however the more militant unionists could not accept it and the militant UVF initiated a bombing campaign, which the RUC, at first, erroneously blamed on the IRA. Northern Ireland was entering a much darker period and after the events of Bloody Sunday in 1972 there would be no turning back.