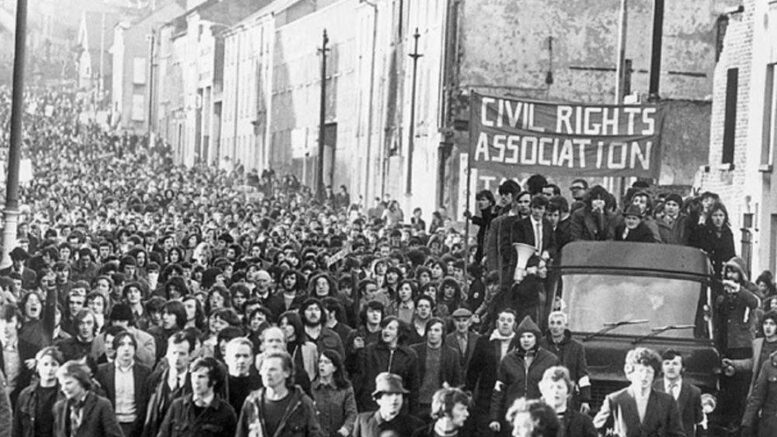 The “zeitgeist” of the 1960s can best be described as the demand for freedom, equality, and justice. In Czechoslovakia, the streets of Paris, the Southern States of the USA, South Africa, Algeria, and many other places the poor and disenfranchised took to the streets. Northern Ireland was to be no exception.

For years the Unionist government of Northern Ireland had discriminated against Roman Catholics, feeding their unionist Protestant people a diet of fear and sectarianism. Catholics came a very poor second in education, employment, and housing. It was not uncommon for multiple Catholic families to share a single habitation whilst at the same time newly married, and even engaged Protestant couples would qualify for council housing.

Gerrymandering, the practice of unfair constitutional division, was rife throughout the north but nowhere so blatant as the city of Derry where a minority Protestant/unionist population was able to, unapologetically, maintain control over the local corporation.

In 1963, Lord Brookeborough, who had famously sacked all the Catholics on his estate and who had openly declared that “we are carrying on a Protestant Parliament for a Protestant people”, resigned from his position as Prime Minister of Northern Ireland. He had held his position as premier from 1952 and under him, the state had stagnated. His successor was the Minister of Finance, Captain Terence O’ Neill, a member of the aristocracy. O’ Neill tried to bring about much-needed reforms within the state and with the help of Brian Faulkner, his Minister of Home Affairs, he was able to draw in much need investment from multinational companies creating many hundreds of new jobs.

There was hope in the air that change was coming to Northern Ireland. O’ Neill felt able to reach out the hand of friendship to Northern Catholics and to the southern Taoiseach (Seán Lemass). It was shortly after the Taoiseach’s visit to Stormont that the Nationalist Party entered Stormont as the official opposition. However, there was discontent on both sides of the religious divide. It was pointed out by nationalists that all inward investments, with the exception of those in Derry, were located in Protestant areas east of the Bann. They were also angry that there was no real attempt made to bring Catholics into the departments of health or education. On the Protestant side a new murder gang styling itself the Ulster Volunteer Force (UVF) had assassinated two innocent Catholics and a firebrand preacher, Ian Kyle Paisley, was vociferously objecting to any links being established with the Catholic south.

Northern Ireland Catholics, from all classes and backgrounds, had been impressed by the Martin Luther King and his non-violent campaign to liberate the black people of the U.S.A. and they began to emulate his tactics by planning a series of Civil Rights marches across Northern Ireland. In this, they were supported by many liberal Protestants, communists, socialists and so was born in 1967, the Northern Ireland Civil Rights Association. They demanded an end to religious discrimination in the allocation of jobs and houses.

The Northern Ireland Civil Rights Association also demanded the introduction of one man-one vote for all people over the age of 18. This would put an end to the system in which only ratepayers (house owners) had the right to vote along with the multiple votes allowed to employers. Other demands included the disbanding of the B-Specials and the removal of the Special Powers Act of 1922 which allowed arrest and imprisonment without trial.

Although NICRA’s demands would benefit many from the Protestant/unionist tradition as they would the Catholic/nationalist community, many unionists suspected that the civil rights movement was merely a tool of the (disbanded) IRA and meant only to benefit Catholics and was a threat to the Union itself.