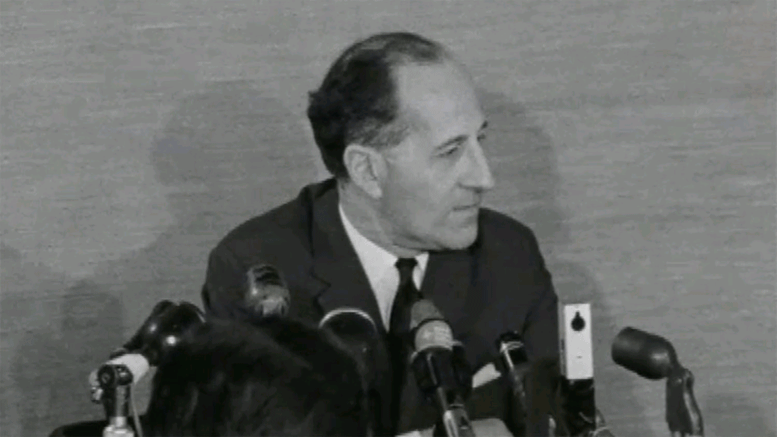 Terence Marne O’ Neill (1914-1990) was the fourth Prime Minister of Northern Ireland and the first of them who endeavored to reconcile Protestants and Catholics within the northern state and also to attempt a normalization of affairs with the Irish Republic.

Born in London on 10TH September 1914, O’ Neill was the second son of Captain Arthur O’ Neill of Shanes Castle, Randalstown, and Lady Annabel Hungerford Crewe Milnes a daughter of the Marquess of Crewe. O’ Neills family can claim descent from Arthur Chichester, the first Earl of Donegal and also from Shane O’ Neill of Clannaboy (Clann Aoidhe Buidhe). Their family name O’ Neill was assumed with royal assent in 1855 by the Reverend William Chichester who was raised to the peerage in 1868 as Baron O’ Neill of Shane’s Castle Randalstown.

Terence O’ Neill was educated at Eton and was commissioned at Sandhurst into his father’s regiment the Irish Guards in 1940. His father had been killed in action just 3 months after Terence’s birth. He married Katherine Whitaker of Hampshire in 1944 and they had two children, Patrick (1945) and Anne (1947). The family moved, in 1945, to Ahoghill in County Antrim. In 1946 he was elected as Unionist MP for Bannside and served under Lord Brookeborough in a series of junior positions. In 1953 he was appointed as Chairman of Ways and Means and also as Deputy Speaker to the House of Commons. By 1956 he had progressed to the position of Minister of Home Affairs and later in the year was appointed Minister of Education.

By 1963, Northern Ireland’s economy was in a precarious position. Shipbuilding and engineering were in decline and the linen industry had already failed. The Unionist Party was unhappy with the way Brookeborough was running things and he was forced to resign. Terence O’ Neill, the finance minister since 1956, impressed the Unionist Party by his ability in attracting foreign/multinational investment in Northern Ireland, and his efforts to modernize health, education, and welfare. They confirmed him as party leader and the prime minister but his appointment was not without its critics as there were many in the party, and without, who would rather have let the status quo remain unchanged.

O’ Neill, from the outset, was adamant that there would be reforms in the democratic process, that sectarianism and discrimination in housing and employment would have to be removed and that local government would have to be reformed. In essence, what he wanted was the full inclusion of the nationalist/Catholic population of Northern Ireland to affairs of the state. O’ Neill, much to the chagrin of the more extreme members of his party, visited Catholic schools and hospitals and visited Catholic clergy.

O’ Neill wanted to achieve a better relationship with the Irish Republic, the Taoiseach of which was Seán Lemass, leader of the Fianna Fáil party. Lemass was also in the process of modernizing southern government and society and both men were attracting foreign investment and opening up the British Market so important for both Irish states. O’ Neill invited and received Lemass to Stormont in January 1965.

However, in spite O’Neill’s success in improving Northern Ireland’s economic status, there was opposition from die-hard unionists and from Protestant extremists who opposed any concessions for Catholics and feared that by having an improved relationship with Dublin that the union of Northern Ireland and Great Britain would itself be jeopardized.

In the meantime, a new organization that was demanding reform, the Northern Ireland Civil Rights Association, taking its inspiration from the struggle of black Americans for equal rights, and with the slogan of “ONE MAN ONE VOTE” had started to organize public demonstrations. Demanding parity of justice in education, housing, and employment they planned a public march through the streets of Derry on the 5th October 1968 but the Minister of Home Affairs, William Craig banned it. This ban was to be enforced by the Royal Ulster Constabulary (RUC), a predominately Protestant force. They attacked the marchers, many of whom were high profile figures in politics and society with truncheons and water cannons. Rioting followed in the Catholic Bogside of the city. This was televised and photographed by international press thereby causing huge embarrassment not only to the Northern Ireland Government but also to the U. K.

In January of 1969, another march, this time from Belfast to Derry was attacked at Burntollet a few miles from Derry, by a mob of Protestant extremists and many people were injured. The RUC did not intervene to prevent the attack. Again this led to serious rioting in Derry.

The final years of O’ Neill

In February, faced with increasing unrest, O’ Neill called a surprise general election and although O’ Neill was able to achieve a majority in Stormont, he only narrowly escaped losing his own Bannside constituency to Ian Paisley. Alarmed by the increasing levels of violence, and under pressure by an embarrassed Westminster Parliament, O’ Neill conceded to the demand of “one man one vote” The Minister for Agriculture, James Chichester-Clark and Brian Faulkner the Minister for Commerce, resigned. O’ Neill resigned as leader of the Unionist Party and as Prime Minister in April 1969. He retired from politics in 1970 and received a life peerage.