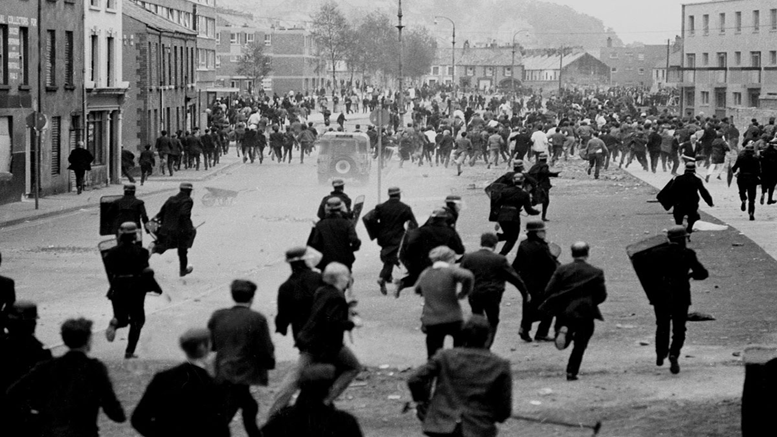 Following on from the Peoples Democracy march of 1st January 1969 from Belfast to Derry and the subsequent rioting in the Bogside and other towns in Northern Ireland, the Northern Ireland Civil Rights Association and its supporters were openly condemned by the Government of Northern Ireland as being manipulated by communists, republicans and socialists.

The government openly supported the so-called loyal institutions when they demanded the right to parade through towns and villages where the population was overwhelmingly Catholic whilst at the same time it ordered the  Royal Ulster Constabulary to robustly put an end to demonstrations for civil rights and social reform. This sectarian police force needed no prompting and in April of 1969, some of its members entered the home of Derry man Sammy Devenny, trashing it and savagely beating Devenny and his daughters so badly that Devenny never recovered from his injuries and died on 17th July.

Again in July, the Orange Order decided to walk through the Catholic village of Dungiven and during the inevitable rioting the RUC brutally beat Francis McCloskey, a 67-year-old Catholic resident of the village so badly that he too died of his injuries. Francis would become the first Catholic civilian killed in Northern Ireland’s troubles. The people of Derry had had enough. They were not only in a different camp from the government; they also despised the local city council which was controlled by the unionists due to the worst case of gerrymandering of electoral wards ever experienced in the northern statelet.

The stand against sectarianism A youth armed with Molotov cocktails keeps guard on top of a highrise flat in Derry.

The nationalist people were well aware of the fact that on 12th August, the Apprentice Boys of Derry, a loyal order, would demand and receive permission to walk through the city. Part of their route would take them along the western wall of the city directly overlooking the Catholic Bogside.

In anticipation of a confrontation taking place, local republicans decided to form the Derry Citizens Defence Association (DCDA) with the intention of maintaining peace and defending the Catholic areas of the city, particularly the Bogside which was the usual target of the RUC.

Many people and activist groups immediately joined the new association. The inevitable did happen when loyalists and nationalist youths exchanged insults and then stones at Waterloo Place. The RUC advanced with many loyalists coming behind them, pushing nationalists up William Street towards the Bogside. However, this time things were different.

The people of the Bogside, with their brothers and sisters from the rest of the city, and further afield, were there to stop them. The Catholics were armed with stones and petrol bombs, they raised barricades, the rooftops of the “high flats” were commandeered by the Bogside youths and from this advantage point, they rained petrol bombs and missiles upon the RUC invaders.

For their part, the RUC were using CS gas canisters which they used to flood the district but a soft wind would blow the gas back towards them. The police were poorly equipped with shields that were much too small and their uniforms were not flameproof causing many of them to suffer severe burns from the Molotov cocktails.

Police reinforcements were sent in from all over the north but to no avail. The ‘bogsiders’ would not yield an inch and fought them to exhaustion, all the time broadcasting to the world at large on Radio Free Derry.

Response from the Irish Republic

On the 13th of August, the Taoiseach of the Republic of Ireland, Jack Lynch sent Irish troops to the border areas to help provide medical aid and shelter for the wounded. This caused the nationalists to hope for, and the Unionists to fear, an incursion into the Bogside by Irish troops.

Response from the British North

The northern government next decided to bring in the notorious B-Specials to replenish the RUC. This was an act of pouring petrol on the fire. This force was hated by the nationalists of all hues. At the same time, the RUC had opened fire on a crowd of nationalists standing guard over St. Eugene’s Cathedral. Two men were wounded.

By the 14th of August fighting was beginning to break out in other parts of the north as young nationalists tried to divert RUC reinforcements away from Derry. In Belfast, Orange pogromists attacked the Catholic Bombay Street district burning homes and displacing over 1,500 people. On the 14th August, James Chichester Clarke, the Northern Irish Prime Minister was forced to request the British Prime Minister to send in the British Army. Within hours a company of the Prince of Wales Own Regiment entered the city separating the warring sides. On the main, they were welcomed by the nationalists.

It is reckoned that approximately 350 RUC men were wounded to some extent during the riots, of the residents there are no figures as many went over the border for treatment.

In the rest of the 6 counties, Belfast suffered the most with many having lost their homes and 5 Catholics and 2 Protestants were killed. In the aftermath of the battle of the Bogside, the nationalist people would see the despised corporation fall, they would also take pride in themselves knowing that they had stood up against discrimination and deprivation.