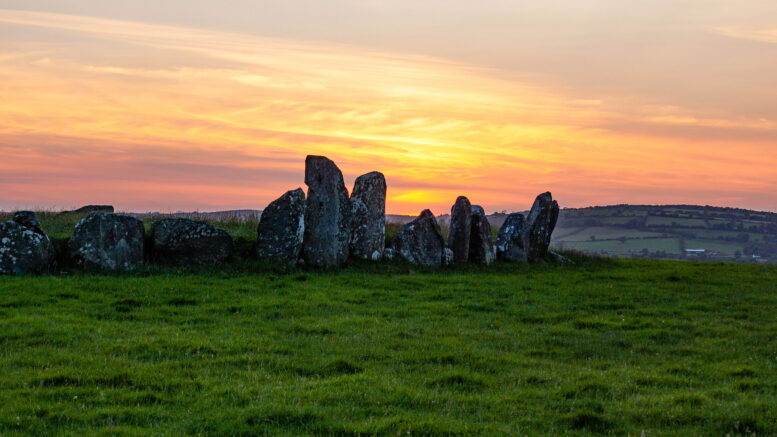 Bealtaine is old Irish that translates to bright fire with the anglicized name being Beltane. It’s an ancient pagan festival celebrated by the Celts on May Day. They would perform many rituals, hold feasts, and light fires to celebrate birth and fertility. These celebrations could be true but in Ireland, we’ve very little evidence to support this. For the purpose of this article, we’ll rely on old texts to see that Bealtaine did exist in some form or another.

Bealtaine (or Belltaine) appears in a 9/10th-century Irish glossary apparently written by the King of Munster/Bishop of Cashel, Cormac úa Cuilennáin.

Cormac’s glossary was translated in the 19th century by John O’Donovan who wrote:

BELLTAINE ‘May-day’ i.e. bil-tene i.e. lucky fire, i.e. two fires which Druids used to make with great incantations, and they used to bring the cattle [as a safeguard] against the diseases of each year to those fires [in marg.] they used to drive the cattle between them.

Comparing the two we can see the original text never contained ‘May-Day’ and it was added by O’Donovan as part of the translation. A footnote added by the editor refers to an eleventh century Psalter called the Southampton Psalter, Insular illuminated Psalter from Ireland. Is this where Beltaine as a May Day celebration originates?

In the Ulster Cycle of Irish mythology Bealtaine is mentioned in the tale Tochmarc Emire (“The Wooing of Emer”) recorded in Lebor na hUidre (the Book of the Dun Cow ), compiled approximately 1050 A.D. Its believed this story may have been first written down by Irish monks in the 6th century to preserve national literature but most collections had been destroyed by invading Vikings.

In the Wooing of Emer, it states:

Bend Suain, son of Rosc Mele, which she said this is the same thing, viz., that I shall fight without harm to myself from Samuin, i.e., the end of summer. For two divisions were formerly on the year, viz., summer from Beltaine (the first of May), and winter from Samuin to Beltaine.

The bonfires of Bealtaine

Foras Feasa ar Éirinn (The History of Ireland) written by Geoffrey Keating, a 17th-century historian, mentions the Convention of Uisneach held at Bealltaine.

The men of Ireland would hold meetings to exchange goods and valuables. However, they also offer sacrifices to the chief god called Beil. They would light two fires in every district in Ireland in honor of Beil. They would then drive the weaklings of each species of cattle between the fires to shield them from all diseases during the year.

Uisneach, or the hill of Uisneach, is in Co. Westmeath. It’s an ancient ceremonial site and the symbolic center of the land in Irish mythology. 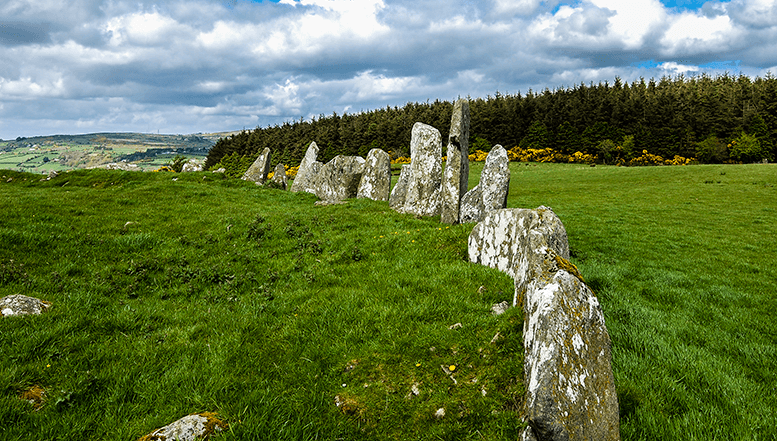 Located beside the town of Raphoe in Co Donegal is Beltany Stone Circle, build in the later Bronze Age period. The Stone Circle has a diameter of 145ft. Its made up of 64 large standing stones enclosing a low earth platform. On the north-east side of the circle, one of the stones is decorated with cup-marks facing into the inner circle. This stone, the only decorated stone in the circle, aligns with the sunrise during Bealtaine.

We don’t know the exact purpose of the Beltany Stone circle. A stone head found within the circle was craved between 400BC – 400AD indicating the monument was in use for centuries.

Many people today follow Bealtaine celebrations along with old Irish May Day customs we mentioned in our other article. The festival of Bealtaine is making a comeback in Ireland with the Bealtaine Fire at Uisneac being lit each year.

The murder of the Clonycavan Man