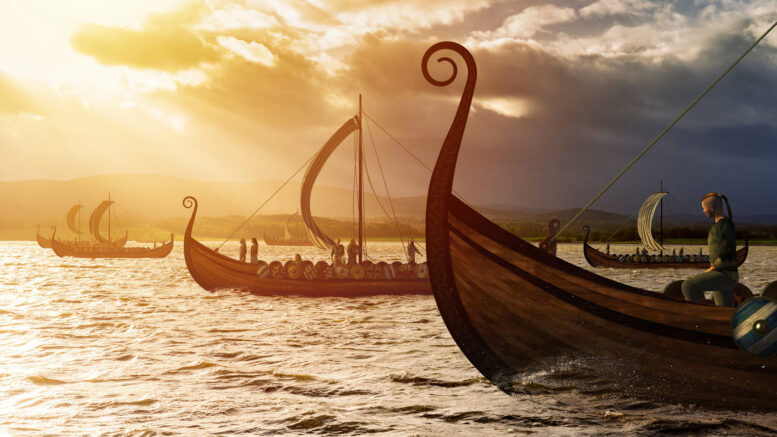 he Vikings first invaded Ireland in 795 AD. A small group of Norse warriors attacked a monastery on the east coast. They plundered the monastery of its valuables, such as relics, and laid it to waste.

The history of the Vikings in Ireland spans over 200 years and although it can be considered short-lived, they did make important contributions to the Irish way of life.

The first Vikings to arrive in Ireland

The first group of Vikings to invade Ireland was most likely Norwegian, known as the Finngaill, the fair foreigners. The translation, which is often debated, could have been related to either their ethnicity, their skin or hair color, or even the color of weapons and battle clothing. Another theory is Finngall refers to old foreigners and that it’s not related to a physical description.

The Vikings, who were referred to as heathens, first appear in the Annals of Ulster 795AD compiled by the monastic movement in Ireland.

The burning of Rechru by the heathens, and Scí was overwhelmed and laid waste.

There are two possible locations for Rechru. Rathlin Island, located on the northeast coast it’s only a short distance from Scotland or  Lambay island, located a few miles from the Dublin coast. Wherever its location, it marked the beginning of a more aggressive invasion.

The Vikings stayed close along the Irish coast. They targeted many of the Irish monasteries located near the coast and on riverbanks. They used the waterways to their advantage and plundered the monasteries in hit and run attacks.

The monasteries, more than just places of worship, gained a reputation throughout Europe as places of excellence. The settlements were often community and political hubs that secured silver & gold relics. Not only did the monasteries face the threat of attack from the Vikings, but they also faced a bigger threat from the Irish.

Why did the Vikings attack monasteries?

There are various theories on why the Vikings attacked monasteries in Ireland. One such theory suggests the Vikings, who were pagan, preyed on the monastic movement. They stole and damaged relics, took hostages, and killed the clergymen. Another theory is that word got to the Scandinavians, who were elsewhere in Europe, that Ireland’s monasteries had great wealth. Or did the warriors accidentally stumble upon their first monastery, as they scouted to expand the Norse Kingdoms?

The Annals of Ulster mention some of the earlier attacks by the Vikings.

798AD: The burning of Inis Pátraic by the heathens, and they took the cattle-tribute of the territories, and broke the shrine of Do-Chonna, and also made great incursions both in Ireland and in Alba.

802AD: Í Coluim Chille was burned by the heathens.

806AD: The community of Í, to the number of sixty-eight, was killed by the heathens.

There were only a few attacks in the first 25 years of the Norsemen finding Ireland but by 820 AD they began an escalation of attacks.

They first attacked Corcach Mór (Cork), located on the south-west coast and a year later took a ‘great number of women’ prisoners after plundering Étar. By 825AD they were performing several raids all within the same year.

Did the Irish fight against the Vikings?

Ireland had no centralized government when the Vikings arrived. The island was split into several Kingdoms that were fragmented into smaller sub-kingdoms and territories. The political mark-up of Ireland was complex and often violent.

Along with the High King there were several other kings, and chieftains, none of which worked as a centralized government.  There was a constant power struggle between the kings and chieftains so battles were a common occurrence between the Irish Kingdoms. The absence of any unified front in Ireland made it easier for the Vikings to invade with each Kingdom having to protect their own territory.

Just over 40 years since the Vikings first invaded Ireland, their larger fleets began to arrive in Irish waters. The Annals of Ulster describes the arrival of a large Norse fleet in 837 AD

Its arrival pathed the way for a more permanent presence of Vikings in Ireland.

When the latest big Norse fleet arrived they built encampments known as longphorts, a winter camp. The camps allowed the Norsemen to take shelter on land for longer and also venture further inland were they’d hunt for food and valuables.

Once such longphort that played a critical role was the Viking settlement in Dublin called Dyflinn. It sat on the south bank of the River Liffey, opposite an earlier founded Gaelic settlement called Áth Cliath.

located downriver, Dyflinn was further inland than usual but it still had quick access to the Irish sea. The Norse upgraded their longphort turning it into a trade port. It linked with other ports in the Norse Empire creating a large network of trading.

Other founded Viking settlements in Ireland included Cork, Limerick, Waterford, and Wexford. Before long, they assimilated into the Irish way of life becoming tradesmen and town-dwellers.

The arrival of the Dark foreigners

As the Finngaill (fair foreigners) continued their new life in Ireland another wave of Vikings arrived in 851 AD. These new Vikings were different from the previous invaders, so much so, the Irish called them the Dubgaill (Dark foreigners). Used to refer to rival groups of Vikings, the meaning of fair & dark foreigner is often debated.

The Dubgaill arrived in an expedition of 140 ships and traveled into Dublin. The Annals of the Four Masters notes:

The dark heathens came to Áth Cliath, made a great slaughter of the fair-haired foreigners, and plundered the naval encampment, both people and property. The dark heathens made a raid at Linn Duachaill, and a great number of them were slaughtered.

The Dubgaill were likely Danes, arriving in Ireland to drive out the Findgaill and claim authority over Ireland. They claimed Kingship of Dublin establishing an alliance with other Irish Kings but at the same time making enemies.

Forcing the Vikings out of Ireland

By 902 the King of Leinster and the King of Brega launched an attack on the Dublin Viking settlement. The Viking King of Dublin and his followers fled Ireland half dead and abandoning most of their ships.

It wouldn’t be long until the Viking warriors returned to Ireland, but with a greater force.

The Neolithic Period In Ireland