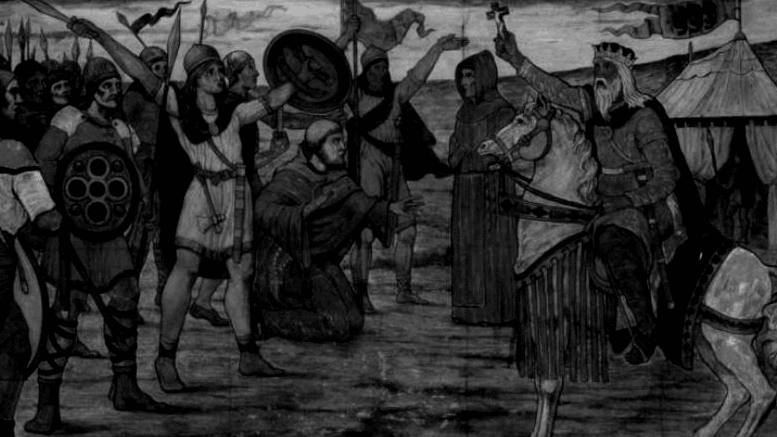 The High Kings of Ireland is a significant part of Irish history and mythology. They were historical and legendry figures known as an Ard Rí who claimed Lordship of the entire island of Ireland.

The High Kings, or at least their stories, date as far back as 1500 BC so their existence is part legendary, fiction, and historical. Any of the High Kings who lived prior to the 5th century AD is considered a legendry King, part of Irish mythology (pseudohistory).

The First High King of Ireland

In Irish mythology we’re told the story of how a group of people called the Fir Bolg invaded Ireland with 5,000 men.

Upon arrival their leaders, five brothers, divided Ireland into provinces and granted themselves the title of Chieftain. Between them they decided their younger brother, Sláine mac Dela, would be given the title of King and he would rule over them all.

Sláine’s role as High King of Ireland was short lived. A year after becoming king he died at Dind Ríg located in the province of Leinster. According to early Irish literature his burial place is said to be at Dumha Sláine (burial mound of Sláine). The Hill of Slane, as it’s known today, became the centre of religion and learning in Ireland and was closely associated with St Patrick.

After the death of King Sláine mac Dela in 1513 BC, his brother Rudraige took up the position of King but this too would be short lived as he died 2 years later. Two of the five other brothers became joint High King and ruled for a further 4 years until both died due to plague.

The last of the brothers, Sengann mac Dela, became High King and ruled Ireland for 5 years. His kingship came to an end when he was killed by the grandson of Rudraige, Fiacha Cennfinnán, who went on to take the title of King.

The line of kings remained with the Fir Bolg’s until 1477 BC when the legendry Tuatha Dé Danann invaded Ireland.

For the next two thousand years, in Irish mythology, Ireland would have over 100 legendry High Kings.

Leaving mythology behind, Máel Sechnaill mac Máele Ruanaid (Malachy MacMulrooney) is recognised as the first historical High King of Ireland. He served as king between 846–860 AD and died two years later. After King Máel there would be another 16 other High Kings in Ireland until the last serving King in 1166.

The Last King of Ireland

Ruaidhrí Ó Conchobhair (Rory O’Connor), who was the King of Connacht, became High King of Ireland in 1166 after the death of King Muircheartach Mac Lochlainn.

Not only was Ruaidhrí inaugurated as King of Ireland in Dublin he was the first and only Gaelic King. His ruling though, would be interrupted by the invasion of the Anglo-Normans, bringing an end to the Irish high-kingship in 1198.

If you were to ask an Irish person to name a High King, there will be a very high chance it will either be Brian Boru or Niall Noigiallach (Niall of the nine hostages). So what makes these two Kings more important than all the other Kings?

The Cromwellian Act Of Settlement 1652