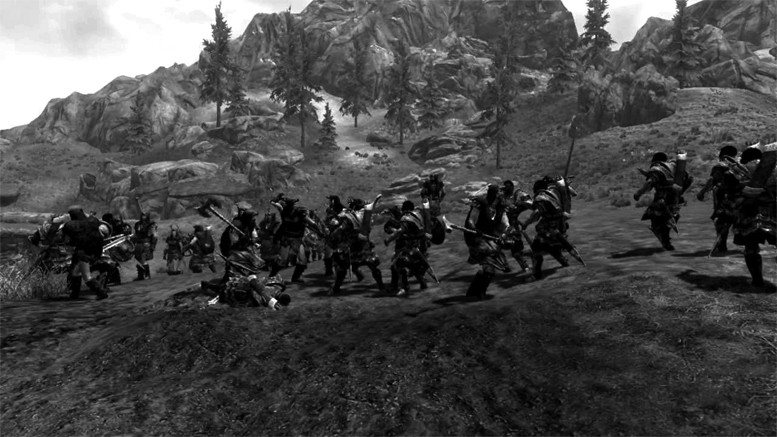 In the Mythological Cycle of Irish Mythology, the Fir Bolg (men of bags) arrived in Ireland after suffering 200 years of slavery in Greece. The Fir Bolg were descended from the Muintir Nemid, who, following the defeat of the Nemedians by the Fomorian Sea raiders, they fled with a small band to the safety of Greece

Over the years they began to grow in number and prospered, but as their numbers grew, it caused the Greeks to become wary of them. This fear led the Greeks to oppress the Nemedians by putting them into bondage, forcing them to carry soil in woven bags in order to improve the rocky fields of that land. It is said that because of these bags of soil, the Nemedian people became known as the Fir Bolg, which means the men of the bag.

Formation of  the Firbolg, the Fir Domnanns, and the Gaileoins

After 200 years, the progeny of Simeon Breac, grew tired of the toil and hardship and decided that they would leave it behind and return to Ireland and resettle the land that once belonged to their ancestor Neimheadh. They were divided into three groupings, the Firbolg, the Fir Domnann and the Gaileoin who were ruled by five chieftains and they would divide Ireland into five parts to be shared between them. The chieftains were all brothers, the sons of Dela who was the son of Lot. They were to flee from Greece in ships built from the bags that they had been forced to fill with earth during their years of servitude.

Their arrival in Ireland

The first group, 1,000 warriors of the Gaileoin, under the leadership of Sláine mac Dela landed at Inbhir Sláine and the share of the land that was theirs was from Inbhir Colptha to Comar trí nUisce (Leinster).

The Fir Domnann landed at Inbhir Domnann. This group also numbered 2,000 and were under the leadership of Genann and Rudraige. Genann was to take the lands of Mebh and Aillil (Connacht) whilst Rudraige was allotted the land of Conchubhair (Ulster).

The first King of Ireland

The landings in Ireland were all made within a week during the month of August. The five brothers then decided that Sláine would be given the title of King and his rule lasted one year before falling in battle at Duinn Righ.

After the death of Sláine, the kingship was passed down through the five chieftains and others for 36 years until the time of Eochaid mac Eirc the ninth king whose wife, Tailtiu, was the daughter of the king of Spain.
For the 37 years since their arrival in Ireland, the Fir Bolg made war upon no other people except between themselves, and if they did make contact with the savage Formorians who had defeated their forefathers, it was not in conflict.

During his reign, which was to last ten years, Eochaidh established in Ireland, for the first time, the rule of law. He banished the telling of untruths and in his time, there was no moisture to wet the land of Ireland except the morning dew.

The dream of Eochaidh

It came about that one night Eochaidh had a dream in which he saw a great fleet of ships coming to Ireland. His poet advised him that it was a prophecy and so it turned out to be. From the northlands came the ships of strangers who were led by the king Nuada. These new people were known as the Tuatha Dé Danann (People of the goddess Danu) who landed in Connacht and before long a confrontation between them and the Fir Bolg came about. After the defeat at the Battle of Mag Tuired the Fir Bolg was driven from Ireland by the Tuath Dé.