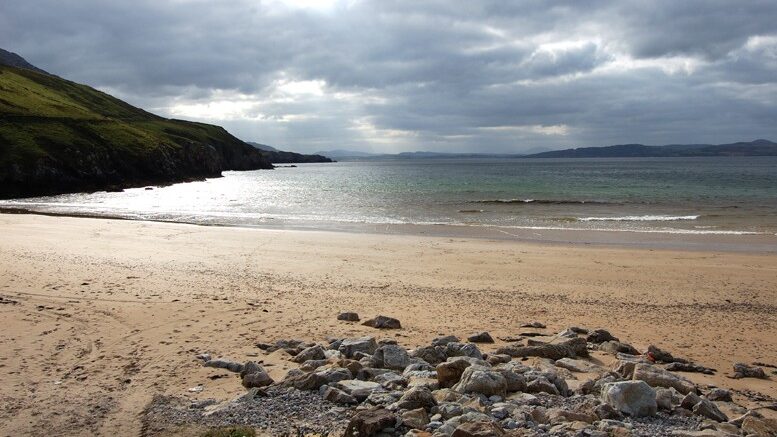 After the destruction of Ireland’s first settlers by plague, Ireland was empty of people, and it remained so for thirty years according to Irish Mythology. Then from Scythia, a central region in Europe, came Neamheadh Mac Agnoman mhic Pamp a descendant of Magog son of Japheth.

Some say that Neimhidh (Nemed) was of the race of Adhla the son of Parthalon who had not accompanied his father to Ireland but had remained in the lands of the east.

Neimhidh had with him his wife Macha and his sons Starn, Iarbhoinel Fáidh, Ainnin and Feargus Leithdearg (of the red side). They came in 34 ships each containing 30 people and began their settlement. They prospered but were not left in peace being preyed upon by the Fomorians, sea warriors of the race of Cham (Ham) son of Noah.

The death of Madán’s sons

The Fomorians were reputed to be a race of warlike misshapen grotesque and among them was a chieftain, Madán Muinreamhair (thickneck), and he had four sons. In one day these sons erected a fort at Rath Chinnich, near Derrylee in Armagh. Neimhidh recognised the danger this fort posed to his people so before the next day dawned he killed Madán’s sons. Neimhidh then made this a royal fort and also built another at Rath Ciombaith in Séimhne (Island Magee in Antrim). He and his people next set about clearing 12 plains of woods.

The bursting of the four great lakes

The Nemedians, as the people of Neimheadh are known as in English, prospered in Ireland and in the lifetime of Neimheadh four great lakes were to burst forth, Lochs Cal, Muinreamair, Dairbrech and Annin. This last loch burst forward as the grave of Annin, son of Neimheadh was being dug. During the 12th year after coming into the land, Macha, wife of Neamheadh died, some say by the hand of the monstrous Cyclops, Balor, a Fomorian chieftain. Armagh (Ard Macha, the hill of Macha) is where she was buried and the site still carries her name to this day.

At the battles of Badhgna in Connacht, Cnamros in Laigne and at Murbolg in Dal Riada, the Nemedians were to defeat the Fomorians, but not long after the last battle, plague struck and Neimheadh perished along with 2,000 of his people.

The Fomorian chieftains, Morc mac Dela and Conand mac Febar recognised the weakened state of the surviving Nemedians were able to oppress them, forcing a great tax of two-thirds of all the wheat, butter and milk produced by the Nemedians. This tax was to be paid every Samhain at the tower of Conand on Tory Island.

The Nemedians became very angry after a while and formed a great army of 30,000 on land and another 30,000 on the sea. Their leaders were Fergus Leithdearg Mac Neimheadh, Simeon Breac Mac Iarbonel Mac Neimheadh, and Erglan mac Beoan mac Starn mac Neimheadh. They were victorious over Conand and his people, destroying them and pulling down the great tower, but in the throes of their victory they were attacked by Morc mac Dela who led a fleet of 36 ships against the Nemidians and a great slaughter ensued.

A terrible disaster fell on the Nemedian fleet and all but one of their ships went down. That ship contained thirty warriors and not wishing to come under the oppression by the Fomorians again, they fled from Ireland. Fergus Leithdearg and his son Briotán went to the great neighbouring island and became the fathers of the Britons. To the north of Scotland fled the three sons of Beoan, Erglan,Matach and Iartach. Their descendants stayed in Alba until the Cruithin (Picts) from Ireland displaced them.

Simeon Breac went eastwards into Greece where after a time his people were to become enslaved by the Greeks. They were to return to Ireland 217 years after Neimheadh first set foot on the soil of Erin to rescue those Nemedians who had remained in Ireland living under the repression of the Fomorians. To the lands of the north went Iobáth mac Beothach another chieftain and his progeny were the Tuatha Dé Danann.