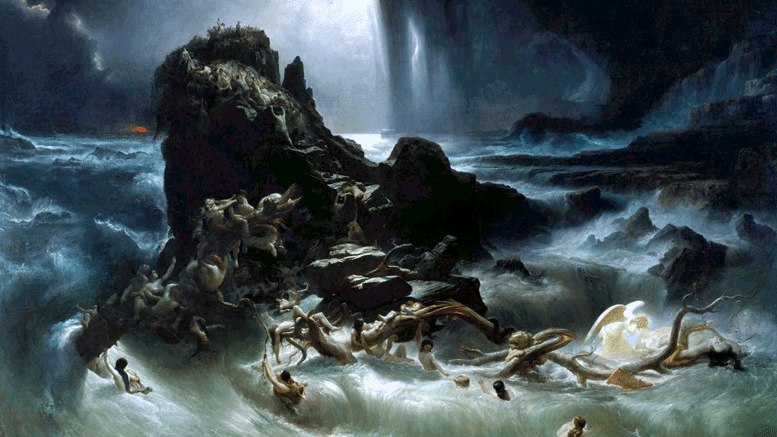 The story of Ireland’s first settlers is part of Irish mythology taken from a manuscript, Foras Feasa ar Éireann, written by an Irish priest in the 1630s.

In Foras Feasa ar Éireann, we are told by Geoffrey Keating that Banba, a daughter of Cain, the murderous son of Adam, led her people to settle in Ireland. This group numbered 50 women and 3 men who survived for 40 years, and then within the matter of a week, they were all killed by the plague. From then until the great flood, the island was to remain empty.

Bith a son of Noah had been refused entry to Noah’s ark so with the help of a pagan idol, he built his own arc. Along with his daughter Casar, the women Balva, and Barran, and the men Lara and Fintan plus an additional fifty beautiful virgins, they set sail.

After seven years upon the seas, they finally made land at Dun na Mara, a port in the area of Corca Dhuibhne. The group moved into the interior until they came to where the rivers Suir, Nore and Barrow meet. Here Fintan took Casar and sixteen of the virgins whilst Lara, Balva and sixteen virgins went to Ardlaran where he was the first of them to die. In the meantime Bith, the father of Casar took Barron and 17 virgins with him.

After the death of Lara, Balva and the 16 virgins regrouped with Casar and Fintan. Casar sent news of the tragedy to Bith and he decided that the women should be equally divided between him and Fintan and he took his group to the mountain known after him Sliabh Betha. Upon his death, all the women were returned to Fintan. This seemed to be too much for Fintan, the only man along with 53 women so he deserted them.

Casar, heartbroken by the loss of her menfolk then led the women across Ireland to Coille Cesra in Connaught. Now, this happened just six days before the Deluge and as the waters washed over Ireland they all perished.

After the great flood

Some storytellers tell that one hundred years after the Deluge a band of people, fifty men and fifty women, led by Ciocal Mac Níl mhic Ghairbh, mhic Uamhor, came into Ireland at Inbhir Domhnan (Malahide) and sustained themselves for 200 years by fishing and hunting. It is said that they fell to the sword at Maigh Iotha south of Inis Eoin on the west bank of the Foyle. The victor of that battle was Parthalon.

Other sources relate that for 300 years after the deluge, Ireland lay empty of people. Then at that time there arose in central Greece a prince, Parthalon Mac Shera mhic Sru a descendant Of Magog son of Japheth son of Noah. After murdering his parents during a failed dynastic challenge, he with his wife Dalgnat, their sons Ruairi, Slaighne, Laighlinne , their wives, and one thousand warriors sailed across the Mediterranean sea past Sicily, then along the west coast of Iberia into Ireland.

After being at sea for two and a half months they landed at Inbhir Scéine in west Munster. Parthalon led his people to Inis Samheir on the Erne where he made his residence. This place was named after his dog which he killed during a fit of rage when he discovered Dalgnat was cheating on him with his servant Todhga.

When Parthalon had remonstrated with his wife she had replied

Oh Partalon, is it possible that a woman and honey, new milk and a baby, food and a generous person, flesh and a cat, weapons or tools and a workman, or a man and a woman, be left in private without them meddling with each other?

It was this reply that caused him to fly into a mad rage in which he slew his dog.

The 3 lochs of Ireland

When Parthalon had come into Ireland he had found only three lochs. They were Loch Luimneach on the lower reaches of the Shannon, Loch Foidhreamhain or Bantry Bay and Fionnloch Ceara in County Mayo. There were nine rivers also, the Buas in Antrim, the Rúta which is now the Liffey, the Laoi (Lee) in Munster, the Sligeach (Sligo), the Samhaoir (Erne) the Muaidhe (Moy in Mayo) the Moghurne (Mourne in Tyrone) and the Banna (Bann). Seven more lochs were to burst forward during his lifetime in Ireland.

Parthalon lived in Ireland for 30 years and died in Binn Eadair (Howth) and was buried on the Sean Mhaith Alta Eudair so named because trees would not grow but flocks of birds would feed there on the plentiful grasses.

The division of Ireland

After Parthalon’s death, Ireland was divided for the first time between his four sons, Erg, Orba, Fearon and Feargna. To Er was given all the land from Ath Cliath (Dublin) to Aileach Néid at the foot of Inis Eoin. TO Orba went all the land from Ath Cliath to Oileán mór an Bhearraigh in Munster. To Fearon the land from the Oileán Mór to Ath Cliath Meadhruaidhe in Galway and Feargna received all that from Meadhruaidhe to Aileach Néid. His race flourished in the land for 300 years only to perish by plague leaving Ireland bereft of people once again until the second invasion of Ireland.