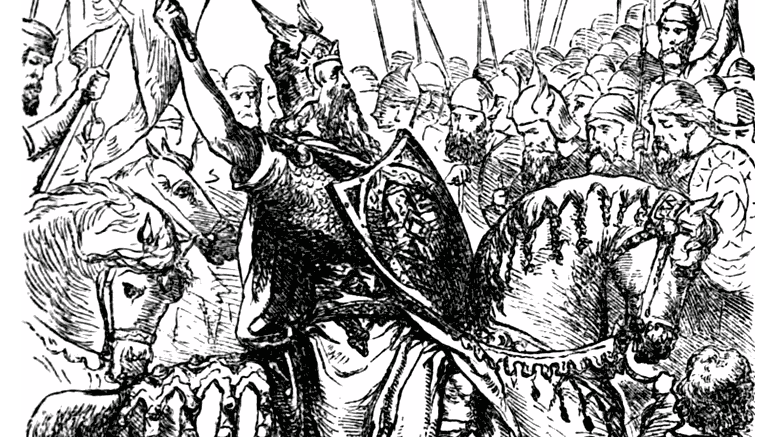 Brian Boru was the last king of Ireland and is said to have been born around 940-950 in Thomond, now known as County Clare, to his mother Bé Binn and father, King Cennétig mac Lorcáin.

Brian’s mother was killed by Vikings when he was a child and being the youngest of two sons, Brian never became king until his father died, and then was succeeded by his older brother, Mathgamain. Mathgamain then died around 976 and this is when Brian became king, at around 30 years of age and was to soon begin his reign as the last High King of Ireland.

Brian Boru proceeded to battle with lesser kings in Ireland and this resulted in him ruling the whole of Munster then he conquered Leinster. Brian met with Mael Sechnaill II, the current High King of Ireland at the time, in 997-998 and between them they divided Ireland – Brian King of the North, and Mael Sechnaill the King of the South.

In 1002, Mael Sechnaill II recognized Brian Boru as King of Ireland after he defeated the king of Dublin and the Norse Settlers, a feat that was almost impossible for any king to do. Mael knew that Boru was seen as a hero in his people’s eyes and had brought Ireland from its knee’s after the invasion of the Vikings, he knew he was no competition.

The Reign of Brian Boru as High King of Ireland began. The origin of this name ( ‘Brian of the Tributes’) came from the tributes he was given from minor rulers throughout Ireland and how he used these tributes (mostly money) to restore important structures such as monasteries and libraries which were ruined during the Viking Invasion, he even sent overseas for lost artifacts and books.

The Final Battle For Brian Boru The Battle of Clontarf, Dublin in 1014 proved to be an important era in Brian Boru’s reign. Once again the Vikings from Dublin started a war with Brian Boru in Clontarf, along with the King of Leinster. The victory was Brian’s, however, it was to be short-lived for him. As the enemy retreated at the Battle of Clontarf, one of the leaders, Bothair, came forward and murdered him. Boru was said to be around 90 years old when he died in the battle.