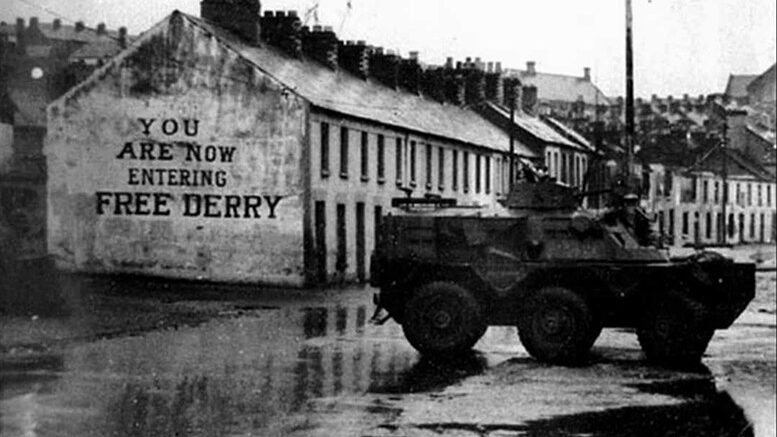 In the early morning of 31 July 1972, the British army initiated Operation Motorman in response to Bloody Friday, a series of bombs that occurred days earlier in Belfast.  Their goal was to re-take control of ‘no-go’ areas in Irish nationalist communities and dismantle the barricades.

Operation Motorman involved approx 21,000 troops and would be the biggest military operation in Ireland since the Irish War of Independence.

During ‘the troubles’, barricades became a common sight. Irish nationalists built barricades to protect their communities from attacks by loyalists mobs and the RUC.

The most iconic ‘no-go’ area was in the city of Derry, named Free Derry. When police attacked the Bogside community in January 1969 the words “You Are Now Entering Free Derry” appeared on a gable wall of a house. The gable wall still remains today with the slogan.

In April of the same year, the police force entered a house on William street. One of the occupants was Sammy Devenny, a 42-year-old civilian. The police beat him so badly he died from his injuries. Sammy became known as the first victim of the troubles.

The Derry Citizens Defence Association was formed in response to the ongoing attacks from the police force. The DCDA was a self-declared government of Free Derry and helped coordinate the residents during the battle of the Bogside.

Other barricades across Northern Ireland strengthened in response to several policies of the British Government such as Operation Demetrius and Bloody Sunday. The no-go area of Derry resulted in 29 barricades, many of which were impregnable by heavy military vehicles.

British troops started preparations to enter no-go areas of Belfast, Derry, Newry, Armagh, Lurgan, and Coalisland. The focus was on Derry, codenamed Carcan. The aim was to dismantle the IRA in the largest no-go areas of the Bogside and Creggan.

British forces started the preparation of Operation Motorman by drafting in an extra 4,000 troops bringing an estimated total of 21,000 troops that included 27 infantries and two armored battalions. Under the cover of darkness, HMS Fearless came close to shore and unloaded Centurion tanks adapted as bulldozers.

On July 30th the British Army raised a “ring of steel” around Derry. They set up checkpoints on most roads coming in/out of the city. They’d also sent foot patrols into the Bogside side area to show their strength.

The Official and Provisional IRA were also preparing for Operation Motorman. They decided beforehand to withdraw from the no-go areas. Not only were they outnumbered and outgunned, they knew the British forces would be reckless towards civilians within the community.

The taking down of barricades

At 4 am on 31 July the army moved into the ‘no-go’ areas across Northern Ireland and proceeded to take down the barricades. The specially adapted Centurion tanks pushed the rubble off the roads allowing the smaller vehicles to pass.

Due to the sheer size of the operation, it was over within a matter of hours. In Derry, four people had been shot and two of them were dead.

The killing of two teenagers

Daniel Hegarty (15) left his house to watch the Centurion tanks roll down the street towards the barricades followed by squads of Royal Marines and engineers. He was shot twice in the head at point-blank range, his cousin Christopher (16), suffered a bullet wound to the head but survived.

In 2011 an inquest jury found Daniel posed no risk and was shot without warning within 10 feet. The accused soldier claimed he pulled the trigger accidentally as it sat on the ground. In March 2016 it was decided not to pursue charges against the solider and is now currently under review at the High Court.

The second killing was of Seamus Bradley (19), an unarmed member of the IRA. He was shot 5 times. It was claimed he was running and climbed a tree armed with a gun. The soldier claimed he shot into the tree and Bradley fell down sustaining additional injuries as he fell. Transferred to an army post beside St John’s school he died from his injuries.

A recent inquest discovered Bradley may have been stripped and shot before he died in captivity. A Coroners’ Court approved a new independent ballistics experts report. It suggested Seamus was running away and unarmed when he was shot numerous times in the back. There was no suggestion he was shot out of the tree.

The British seen Operation Motorman as a success. However, it made the nationalist community even more distrusting of the government and the security forces.

To this day, the gable wall of Free Derry corner still stands in the Bogside and is still a monument for Civil Rights.