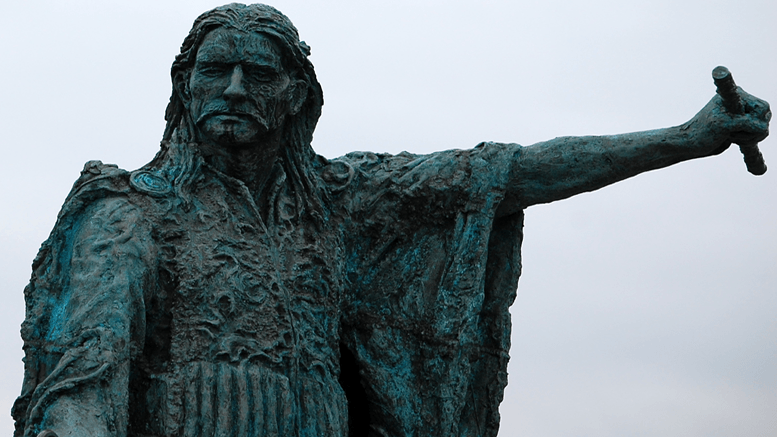 Red Hugh O’Donnell (Aodh Rua ÓDomhnaill) was the son and successor to Hugh MacManus O’Donnell, An ÓDomhnaill, Rí Thír Chonaill, that is, The O’Donnell  King of Tyrconnell, a territory which takes in most of the present-day county of Donegal except for the Inishowen peninsula.

His mother, Aodh MacManus’ second wife, was the formidable and extremely well connected Scottish lady, Fionnuala Nic Dhomhnaill, known to history as the Iníon Dubh or The Dark Daughter. A daughter of James Mac Donald she had been raised at the Scottish court.

Whilst still very young, Red Hugh was married to the daughter of Hugh Mór O’Neill, 2nd earl of Tyrone and he was also a nephew of Turlough Luineach O’Neill who was recognised by the Irish as The O’Neill. Red Hugh was, therefore, a bridge between two traditional enemies, the O’Donnell’s and the O’Neills.

The kidnap of Red Hugh O’Donnell

The English Lord Deputy of Ireland, Sir John Perrot, recognised the importance of the young O’Donnell prince and decided that he would secure him as a hostage thus giving him power over the O’Donnell clan and preventing them from forming a treaty with the O’Neills.

In 1587, when he was sixteen, Red Hugh and two friends, a MacSweeney and an O’Gallagher, were persuaded to board a ship which had been disguised as a Spanish wine barque, berthed in Lough Swilly at Rathmullan. Once onboard they were and carried off as prisoners to Dublin Castle.

The O’Donnell’s offered to pay a large ransom and the Iníon Dubh also gave up 25 Spaniards rescued from the Armada. The English had agreed to this but as soon as the Spaniards were handed they were beheaded. The agreement was not kept.

Red Hugh escapes from the English

Perrot had his hostage but a most reluctant one. The young man continuously sought ways to escape. His first opportunity came at Christmas in 1590 when a rope was smuggled into the prince. He escaped and fled into the Wicklow Mountains. He sought shelter with Phelim O’Toole who had him returned to the English as he feared the anger of the infamous Perrot.

A year later, at Christmas in 1591, Red Hugh made his second attempt at escape, this time by crawling through Dublin Castle sewers. With him were Henry and Art O’Neill, two sons of Shane the Proud. This time the escapees made their way to the Glenmalure stronghold of Feagh Mac Hugh O’Byrne. Unfortunately, the winter was very severe and Art O’ Neill was to die from exposure just as the O’Byrne rescue party found them. Both Red Hugh and Henry O’Neill suffered severe frostbite but were safely returned to Ulster.

Inaugurated as The O’Donnell

Whilst Red Hugh was held as a prisoner by the English, his father had become senile. In 1592, when Red Hugh was sufficiently recovered, he was inaugurated as the O’Donnell and England, for her treachery, had an avowed and implacable enemy.

Red Hugh aided the Maguires of Fermanagh against the English and when his father-in-law, Hugh Mór O’Neill initiated the Nine Years War by leading his clan against the English at the battles of Clontibret (1595) and The Yellow Ford (1598), O’Donnell was at his right-hand side.

In 1595 he ambushed an English force in the Curlew Mountains, killing 500 of them including their commander. However, the tide was turning against the Irish now. England was flooding the country with armies and many of the leading Gaelic families were beginning to make deals with them.

In 1601 the Spanish landed in Kinsale and the English besieged them. O’Neill and O’Donnell marched south from Ulster and Ballymote castle in Sligo in an attempt to break the siege. This turned in to a debacle causing the Irish to scatter and the Spanish to surrender. O’Neill marched back north and O’Donnell was sent to Spain to try for more troops from Phillip III. In Spain, Red Hugh was treated like a royal. He petitioned aid from the King who gave him a promise of another Spanish force but after a year it was still not forthcoming.

The death of Red Hugh O’Donnell

In 1602 he died suddenly whilst en route to Valladolid from Corunna. It is possible that he was poisoned by an Irishman called James Blake who was paid by the English. He was succeeded as chieftain of his clan and prince of Tyrconnell by his brother Rory.

Beginnings Of The Guinness Empire