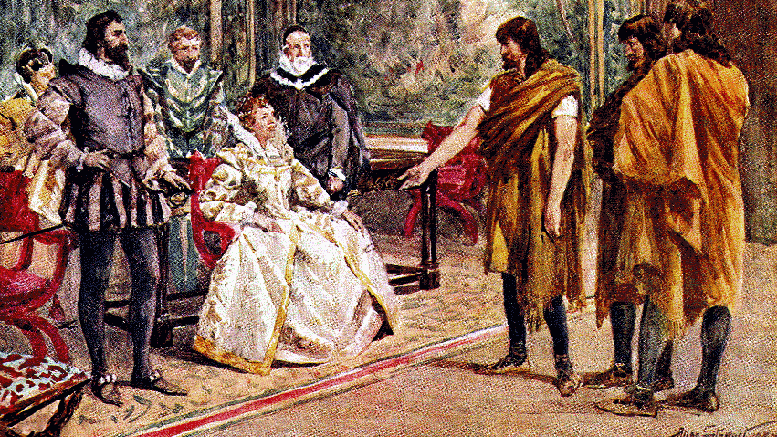 In 1542, the most powerful Gaelic leader in Ulster, Conn Bacach O’Neill, the Lord of Tír Eóghain had submitted to Queen Elisabeth I of England and she had re-granted him his lands and presented him with the English title Earl of Tyrone. O’Neill promised to introduce English language, religion and culture to his people as well as the custom of primogeniture in which titles and inheritance would be passed to the eldest son.

His kinsmen did not accept Conn’s submission. Ulster was to all intents and purposes the last bastion of the free Gaels. The province of Leinster and Munster were being steadily planted by new and Protestant English settlers as part of the  Tudor plantations.

The Gaelic chieftains in Connaught were being increasingly curtailed and brought under English Jurisdiction. Only Ulster held out against English incursion.

Conn Bacach had two sons, Mathew Ceallaigh, Baron of Dungannon, the eldest, was according to English custom, and Elisabeth’s preference, the heir to Conn’s considerable estate. However, the second son, Shane, refuted the English custom of inheritance and claimed that he was, according to the ancient tribal laws, the legitimate claimant.

During the dynastic squabble that followed, Mathew was murdered. Conn then accepted Shane as his heir, even though Mathew had a son Brian, and in 1559, Shane repaid Conn by driving him out of Ulster into the Pale where he died not long after.

Shane set about dominating the rest of Ulster. He brought into his army, many Scottish Gallowglasses, the fierce mercenary clansmen from the Western Isles and plundered the lands of the O’Rourkes to the south, in the west he moved against Calvagh O’Donnell of Tír Conaill, capturing him and putting him in chains. He also raided into the Pale (a small area in Dublin).

In response, Elisabeth I ordered the Earl of Sussex to Dublin as her Lord-Lieutenant with the instructions to bring the traitor O’Neill to heel.

In June 1561, Sussex moved to meet Shane in Armagh and was able to hold the city only after a fierce battle and heavy losses of men. O’Neill’s army pulled back northwards but heavy rains and a shortage of supplies forced Sussex to fall back to Newry.

Receiving extra finance from the court, Sussex made a second advance into the North. He managed to reach Omagh and then Derry but was then forced to return the way he had come. O’ Neill responded to this excursion by a devastating raid into Meath. This left the Queen in a quandary, so she invited Shane O’ Neill to London paying his expenses and giving him the Earl of Kildare.

He was required to give an account as to why he had assumed his position when Brian O’Neill, son of Mathew, was still alive.

Shane ‘the proud’ O’Neill appeared at Elisabeth’s court on 2nd January 1561 where he was received in state. He was accompanied by the Earls of Kildare and Ormond along with a guard of 50 Gallowglasses in their long Irish mantles, saffron dyed shirts, long loose curls and armed with huge battle axes.

Shane went on his knees asking for pardon, in Irish which was translated to the Queen by the Earl of Kildare. Elisabeth delayed him in London to await Brian O Neill’s presence. Brian, however, was slain at Newry by Turlough O’Neill and eventually, Shane was allowed to return home with the title of Captain of Tyrone.

O’Neill defies the Queen of England

Shane O’Neill had no intentions of keeping the Queen’s peace however and he set about immediately attacking his neighbours the O’Donnells, Maguires, O’Reillys, O’Hanlons and others.

Elisabeth was outraged and again ordered Sussex to move against Shane. Again Sussex was unable to engage with the O’Neill’s and had to stand aside whilst in 1563 Elisabeth made more concessions to Shane. This time however she was able to have Calvagh O’Donnell set free but had to give up Armagh.

Shane next turned his attention towards the McDonnell’s of the Antrim glens. This was a Scottish clan led by Sorley Boy (Somhairle Buidh Mac Domhnaill). His decision to attack the McDonnell’s was taken from English advice and tacit agreement from Dublin Castle.

O’ Neill started to raid into Antrim in 1564 laying waste and driving Sorley Boy back near Coleraine. In 1565 his men, reinforced with Clandeboy O’Neill’s swept north into Antrim from County Down.

They pushed the Scots back past Cushendun to Knocklayd and Dunluce Castle. In the ensuing battle over 700 Mac Donnells were killed including Iain Rua and Aengus brothers of Sorley Boy who was himself captured along with another brother Seamus (James). Seamus MacDonnell was allowed to die from his wounds and from mistreatment despite the pleas of Mary Queen of Scotland and Queen Elisabeth of England.

After the battle, Shane O’Neill was to write to Sir Henry Sidney….

“my ancestors were kings of Ulster, Ulster was theirs, and shall be mine”.

Beginnings Of The Guinness Empire