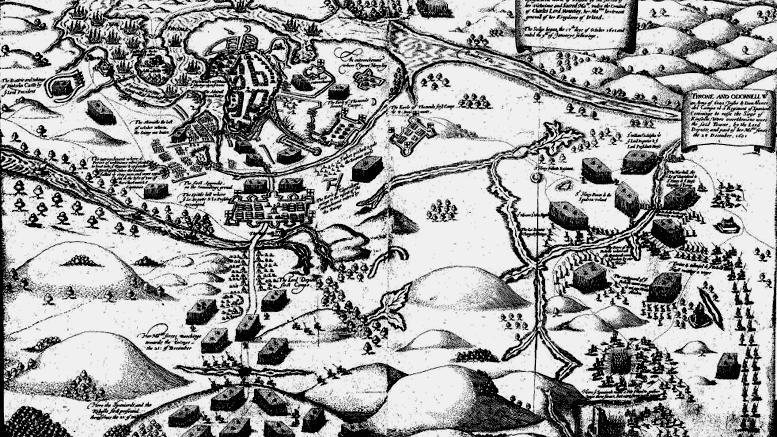 The Battle of Kinsale is one of Ireland’s most famous battles and begun in September 1601 when a large Spanish fleet landed at the harbour of Kinsale. This historic tale of deep loyalty and dedication to a small country began when two patriotic forces, in the names of Hugh O’Neill and Red Hugh O’Donnell, united to drive the English invaders out of their land in 1601.

Both O’Neill and O’Donnell would eventually become head of their individual clans and both shared the same passion for ridding Ireland of the invaders.

O’ Neill, surprisingly enough, was raised by a Protestant family and actually served as a soldier in the British Army however, he had a secret dislike to English occupation in Ireland. O’Donnell was much younger than O’Neill and had a very different experience of the British, he was imprisoned by the English at the age of fifteen and escaped four years later. His experience with the English during his imprisonment was to initiate a deep-rooted bitterness towards them.

The Spanish involvement with Ireland

O’Neill, along with O’Donnell, trained an army and before long they found a powerful ally, King Phillip III of Spain. King Phillip was more than keen to help the Irish for two reasons. Firstly, he wanted revenge for the famous defeat of his Spanish Armada in 1588 and secondly, Phillip saw Ireland as a terrific foundation from which he could invade England.

King Phillip agreed to the request of O’Neill and O’Donnell to send a large army in helping them defeat the English. However, the determined pair were making a name for themselves in Ulster after defeating the English in various ambushes and surprise attacks, which rattled the cages of the enemy.

King Phillip eventually sent his army of 4,800 men to Kinsale in County Cork. However, O’Neill and O’Donnell who were located in the northern county of Donegal so when the Spanish Army landed on the southern shores, they were surrounded by the English army. Lord Mountjoy and Carew, the President of Munster, led the English army and many historians agree that if the Spanish had have met with the Irish army in Donegal, then they would have been strong enough to defeat their enemy. To help their allies, who were now in the middle of being besieged by the English, O’Neill and O’Donnell marched their army 250 miles to Kinsale; a march which many say is one of the greatest marches to date in Irish History.

The final battle at Kinsale

The events that occurred was to be described as ill-judged on O’Neill’s part, as the battle lasted only an hour, 1200 Irish soldiers were lost whereas the English only lost 20. It can only be said that the Irish Army were ill-equipped, badly trained for open-field fighting and were no match against the experienced and heavy ammunition of the English Army.

The Flight of the Earls

Afterwards, O’Donnell fled to Spain where he lived comfortably until he died a few months later, said to have been poisoned by a spy of Carew’s named Blake.

Hugh O’ Neill Surrendered to the English in 1603 and later returned to Ulster, where Lord Mountjoy treated him respectively well; however, most of his lands and authority were non-existent. O’Neill was to later, in 1607, go to Spain with a number of family members and supporters, most of whom were lesser chieftains and this was to become famously known as the Flight of the Earls.