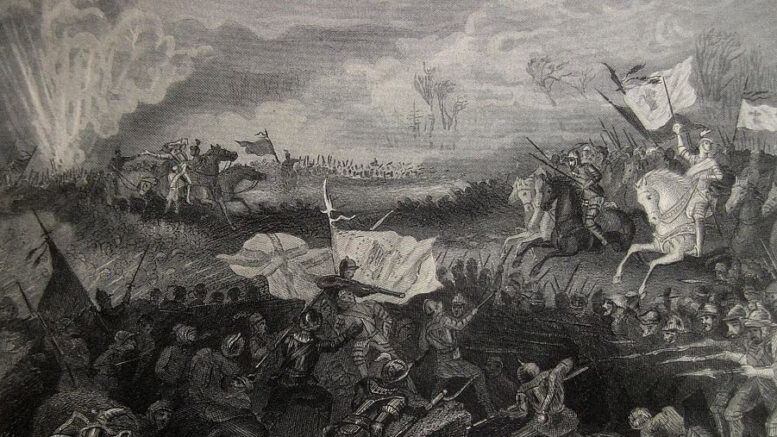 The Yellow Ford ( Béal an Átha Bui) is on the river Callan and close to the river Blackwater about 2 miles from Armagh city. It was the scene of an important battle in which the Ulster Gaels were able to take on and defeat an English army of around 4,000 men.

Bagenal had a great hatred for Hugh O’Neill who was his brother in law. O’Neill had eloped and married Mabel Bagenal in 1591 when he was fifty years of age and she was but twenty. She died a bare five years later and this left a festering sore upon Bagenal.

The start of an Irish rebellion

In 1594, when O’Neill was still loyal to Queen Elizabeth I, he campaigned alongside Bagenal against Hugh O’Donnell and Hugh Maguire. When Maguire, who was also the son-in-law of O’Neill, was besieged in his Enniskillen fortress by Bagenal, O’Neill suddenly withdrew his support when the castle fell. Maguire escaped and soon defeated English reinforcements at the ford of Drumane on the river Arney.

Hugh O’Neill then started a rebellion against the English by February 1595. He destroyed the English fort that stood on the Blackwater near Armagh. Maguire was also able to recapture his castle a year later.

By the middle of 1597, O’Neill’s rebellion had spread to all of Ulster and the English were hard-pressed. Lord Thomas Burgh managed to reach the remains of the fort on the Blackwater and started to restore it to its former strength. In the meantime, the Blackwater fort, manned by about 150 men had become enclosed and isolated as the Gaelic forces took control of all the surrounding countryside.

The Government in Dublin, although advised by the Earl of Ormond to abandon the Blackwater fort, decided to send an army to relieve it and it was to be led, at his own request, by Bagenal. His army of 4,000 men on foot and 300 cavalries, reached Armagh in the middle of August 1598 without event. However, O’Neill had not been idle. His spies had watched Baganal all the way and he was prepared.

At the battle of the Yellow Ford

The size of the Gaelic army is not known for sure but as O’Neill had been able to call on most of the Ulster clans for help and with his own bonnaghts plus his Scottish gallowglasses, it is thought that he had a force the same as, or slightly more than, the English.

As soon as the English moved out of Armagh they came under constant sniper fire. Bagenal’s route, to the Blackwater fort, was to lead his men through very boggy land upon which O’ Neill had traps set up and trenches dug. This was to prove difficult for his heavy weaponry and wagons.

Baganal had organised his men into 6 regiments but the difficult terrain, coupled with the incessant and very accurate sniper fire, was to cause the English regiments to become isolated from each other.

When the leading regiment came to trenches dug by the Irish they quickly pressed forward but found that they had walked into a killing ground. This caused them to pull back directly into the path of the next regiment coming forward. It was at this time Bagenal fell dead, shot in the face by a musket ball. Not long after this, the English gun powder store was blown up, possibly by accident.

The English forward position was confused and O’ Neill seeing this sent forward his cavalry and swordsmen who caused a great slaughter of the English front lines. This was at the Yellow Ford.

English forces retreated to Armagh harried all the way by the Irish, only half of them reached the safety of the city. Next day, the English cavalry broke out of Armagh and fled to Newry.

After negotiations between O’ Neill and the Dublin government the English forces in the Blackwater fort and Armagh, were allowed to leave without their weaponry, drums or banners. O’ Neill had treated his enemies with a humanity that the Elizabethans had never granted theirs in Ireland.

Many of the Irish who had served in Bagenal’s force now came over to O’ Neill and in the other provinces of Ireland that lay under the English boot, a new hope was born that drew many of the southern clans to the Ó Neill.