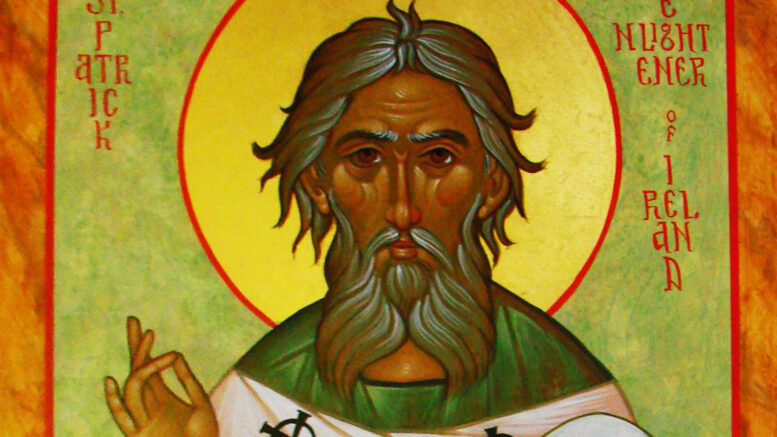 In Ireland, there are many folklore stories associated with the devil and his cloven feet. With the Irish being very superstitious such stories bring a lot of fear into people’s homes.

This folklore tale dates back to when St Patrick was traveling in Ireland to help spread Christianity to a nation of pagans.

The evil black pig of Monaghan

Local people, in what is known as today’s County Monaghan, often complained of an evil wild black pig that would cause chaos among their properties. The large black pig was described like no other farm pig, it was very large, blacker than the night sky, and he had wee beady red eyes that no pig should have.

The Irish, being pagans at the time, believed the black pig as an omen of bad luck. He would destroy farm crops, scare other farm animals, and make loud grunting noises in the dead of night. People were terrified of him and refused to venture alone outside during the night.

Farmers asked local warriors to hunt down the evil pig and kill it before it would cause any more damage. Bands of warriors, the bravest of the brave, searched all over Monaghan for the black pig but he was nowhere to be found.

The arrival of St Patrick

As everyone sat in a large circle St Patrick started teaching them about God. He reached down and plucked a shamrock from the ground and used it to explain the Holy Trinity. Everyone was skeptical about this new god because in their mind he had done nothing for the people of Ireland.

Patrick was interested to learn more about the pig so the warrior told him the stories of what had been happening in the area over the years. After hearing the tales St Patrick knew there was more to this than a simple evil pig. He knew it was a demon on earth so stood up and said “People, I will catch this evil and will banish it from your land forever” and walked off into the distance leaving everyone to talk amongst them.

As Patrick walked along a stone path he spotted a creature in a field. It was destroying crops that were ready for harvest by the farmers. He knew it was the creature everyone described so he gave chase. The large black pig was fast; he ran along the river but in the wet mud he slipped and fell to his knees slowing him down. Patrick stood before the large beast, raid his hooked staff in the air and loudly said the lord’s prayer.

When St Patrick arrived back to the village everyone gathered to hear what happened. The humble man said:

“people you can now sleep easy tonight as the evil that tortured this area for years is no more.”

Everyone looked at each other,  wondering if they should believe this stranger. Before anyone could ask him a question he had already continued on his journey north.

A few years after Patrick had visited Monaghan there was no sign of the evil pig anywhere in the area. Harvest was plentiful, farm animals were no longer frightened, and everyone lived in peace. People were amazed at what happened. They started to believe in God and what they were taught about the Holy Trinity.

A farmer found a stone in a field with an imprint of a human foot and a cloven hoof. The locals believed the hoof was the markings of the devil and the foot imprint belonged to Patrick. It was given the name the devil’s track and is still talked about to this day.

St Patrick and the serpents

Many people believe St Patrick was responsible for driving snakes from Ireland so stories such as the serpent at the river Shannon or St Patrick and the Killer Snake are commonly found in folklore stories.