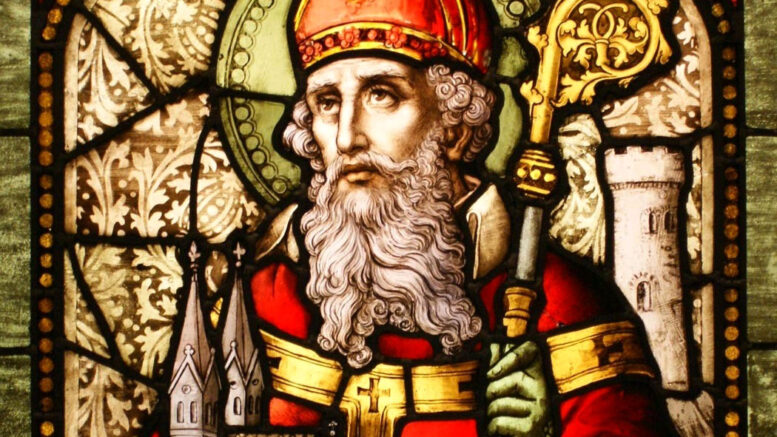 Who was St Patrick?

He describes himself as a simple country person, a refugee, and unlearned. His use of Latin and his father, and grandfather, being members of the clergy would suggest they were a family of a particular social class. Patrick himself would have been skilled in public speaking. He was successful in spreading his message about God to the people of Ireland. He believed

“The wise person is known through speech, and also understanding and knowledge and the teaching of truth.”

When did St Patrick arrive in Ireland?

The precise date of Patrick’s arrival in Ireland is unknown but in his Confessio he does say he was 16 years old. Kidnapped by bandits, brought to Ireland with thousands of others, he was sold as a slave.

He worked as a Shepard but his exact whereabouts remain unknown. His writings do mention a wooded area on a mountain, leaving much speculation.

Patrick believed his captivity in Ireland was punishment for his lack of faith in God. The Lord was acting in anger and Patrick believed its whats deserved. At this realization, Patrick turned his faith around and dedicated his life to God. This was a critical moment for the life of St Patrick. Tending sheep every day he would frequently pray throughout the day. His faith in God grew stronger and stronger. He would pray 100 times a day, before dawn, in snow, ice, and rain describing that he never felt worse for it or lazy.

The escape from Ireland

One night Patrick heard a voice in his sleep say “You have fasted well. Very soon you will return to your native country.” A short time later he was told: “Look – your ship is ready.” The ship was hundreds of miles away, in a port he did not know of. After 6 years of captivity in Ireland, Patrick escaped and made his way to the port.

After boarding the ship he and the crew sailed for 3 days until reaching dry land. They traveled for another 28 days on foot but food supplied ran short. The crew began to starve. The ship’s captain, a pagan, turned to Patrick and said

“What about this, Christian? You tell us that your God is great and all-powerful – why can’t you pray for us, since we’re in a bad state with hunger? There’s no sign of us finding a human being anywhere.”

Patrick remarked nothing was impossible for God, he has abundance everywhere. At that moment a herd of pigs appeared giving the crew a source of food. Patrick described that it was this moment when people began to honor him.

After a few more years traveling Patrick arrived home to his parents who pleaded with him to never leave them again.

Patrick, as a Bishop, returned to Slane in County Meath, 433 A.D. recorded in the Annals of Ulster as:

Bishop Patrick flourishing in the fervor of the Faith and in the doctrine of Christ in our province.

When he was in his 30’s he became one of the first Christian missionaries in Ireland. One legend says Patrick had met a Chieftain in Meath called Dichu who had tried to kill him but Patrick managed to convert Dichu to Christianity.

An assassination attempt was also made on St Patrick after he destroyed a pagan idol by the name of Crom Cruach. This angered an Irish chieftain by the name of Foilge Berrad who swore to kill Patrick. Luckily Patrick’s chariot driver learned of the threat and swapped places with Patrick before Foilge attacked. St Ordan was killed and became known as Ireland’s first Christian martyr.

Converting the Irish from Paganism

Some believe St Palladius was the first Christian to come to Ireland and introduce Christianity to the natives of Ireland. However, it was St Patrick who had made the biggest impact in the country by converting thousands of people by preaching the gospel. It was Dichu (now known as Saint Dichu) that gave Patrick a gift of a large barn that was converted into his first Church, located in Sabhall, County Down in Ulster.

Patrick with his disciples, Beningnus, Auxilius, Iserninus, and Fiaac, traveled all over Ireland teaching his faith, converting clan chiefs, building churches, opening schools and monasteries and convincing many Irish to become monks and nuns. Patrick preached all over Ireland for 40 years mostly in poverty and died on March 17, 461A.D in his Church in Sabhall, County Down.

It was believed Saint Patrick used Shamrocks, a three-leaved Clover, to teach the people of Ireland the concept of the Holy Trinity but none of this was actually mentioned in his writings so it somewhat became part myth and folklore. The Shamrock has been associated with him and the Irish ever since.

To begin with, Ireland never had any snakes as a native creative so it is believed by many that the snakes were a symbol of the druids or Paganism. This theory, however, is often debated because paganism still thrived for many years after the death of St Patrick’s death. He didn’t exactly convert everyone in Ireland to Christianity.

There are many folklore stories associated with serpents in Ireland such as the River Shannon serpent, or the Last Serpent of Ireland called Lig na Paiste, and St Patrick and the killer snake.

St Patrick’s Day is celebrated by parades across the world such as United States, Canada, Australia, Japan, Singapore, and Russia. Outside of Ireland ist more common to celebrate by the ‘wearing of the green’ and maybe drinking green beer. The United States boasts the largest parades such as the St Patrick’s Day Parade in New York City or in Chicago where they dye their river green.

Read more about St Patrick’s day in Ireland and how it’s celebrated.