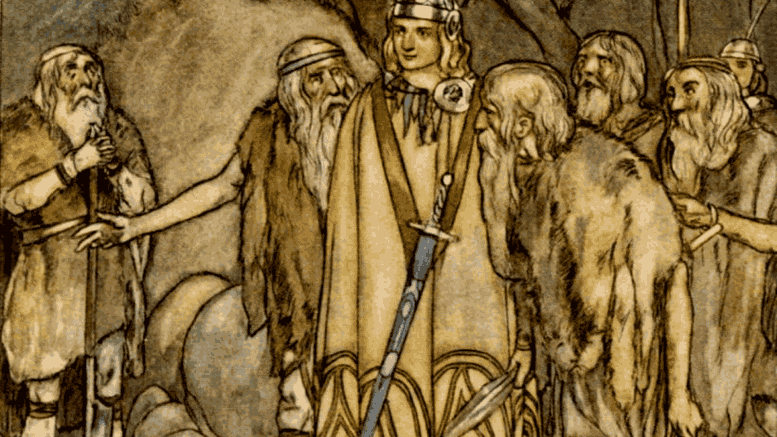 Fionn mac Cumhaill (Finn MacCool) was the leader of Irish warriors called Fianna. He was the central character in the Fenian Cycle of Irish mythology.

Shortly before Fionn was born his father, Cumhal, was the leader of the Fianna warriors. His mother, Muireann Muncháem, was the daughter of a druid called Tadg mac Nuadat. The druid foresaw her marriage and that would ultimately lead to the loss of his ancestral seat. Tadg didn’t hide the fact he disapproved of his daughter’s relationship. Cumhal, who didn’t honor Tadg’s wishes, kidnapped Muireann so they could live a free life.

Outraged at what had happened to his daughter, Tadg appealed to Conn of the Hundred Battles for assistance. Conn also forbid the relationship so he set out after them. During the Battle of Cnucha, Cumhal was slain by Goll mac Morna who then became the leader of the Fianna.

Later Tadg rejected his daughter Muireann who was now pregnant.  Tadg prompted his followers to burn her but Conn disagreed so he intervened. Conn sent Muireann to live with his sister, druidess Bodhmall, and her husband Fiacal mac Conchinn.

Muireann gave birth to a son named him Demne. For his own protection he was called Fionn and left under the care of druidess Bodhmall and a female warrior called Liath Luachra. Both women raised him in secret, in the forest of Sliabh Bladhma. They taught him all the knowledge they had, including how to be a warrior.

As word began to spread of a young warrior called Fionn his father’s enemies were sure to find him. With all his knowledge both his foster mothers sent him on his way to survive on his own.

There are many legends surrounding Fionn and are popular folklore stories to this day. Some of them include: