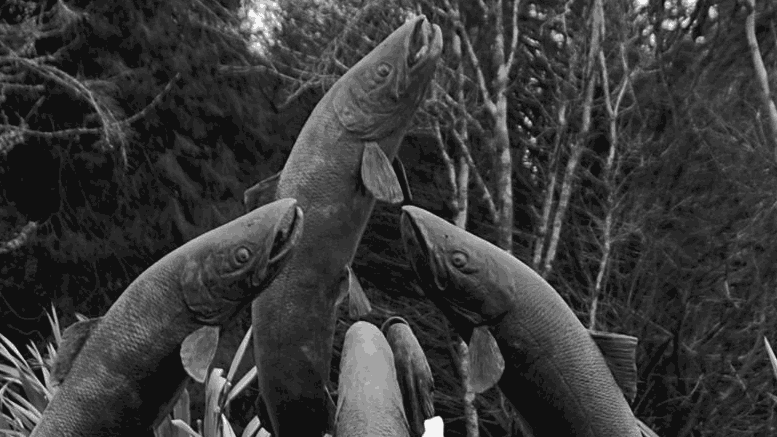 In the Fenian Cycle of Irish mythology, the story of the Salmon of Knowledge tells how Fionn Mac Cumhail became the greatest man of all Ireland.

According to Irish mythology, the first people in Ireland were Bith the son of Noah, his daughter Ceasair with her husband Fintan mac Bóchra, and Ladhra who had piloted their vessel to the island. They had also 50 virgins. As time passed the pilot Ladhra left to find his own path and Bith died leaving Fintain with Cesair and the 50 women.  This was all too much for Fintan so he left the women and moved away on his own. Grief at the loss of her men caused Cesair to fall into a deep melancholy and she died.

Not long after the death of Cesair a great flood, the Deluge, came about. It wiped the world clean with only Noah and his family safe in their ark. However, God is merciful and he felt a feeling of sorrow for Fintan. Instead of condemning him to die in the raging waters he allowed Fintan to become a salmon and in this form, he survived the terrible event.

How the Salmon gained his knowledge

After the waters receded, Fintan the salmon swam up to the Boyne River from the sea. He eventually found a deep quiet pool in which he could regain his strength. Now around this pool, God had allowed nine hazel trees to grow and on each tree he allowed nine nuts to grow. These nuts were filled with all the knowledge of the world.

As the seasons passed and autumn approached, the nuts of wisdom matured and fell, one after the other into the pool where Fintan was swimming. He devoured each nut as it touched the water and so all the wisdom was passed onto him. From this, he was known as “ An Bradán Feasa” or “Bradán an Eolais” which mean the Salmon of Knowledge.

Centuries passed and people returned to the land. They learned about the Salmon of knowledge but no one had ever caught it or gained its wisdom.  Then the time came and a druid poet came into the Boyne valley and settled. His name was Finegas and it was his dream that he would be able to catch Fintan and consume him to gain all the knowledge of the world.

Now in Ireland at this same time was a band of hero-warriors known as the Fianna. One of these heroes, Cumal, fell in love with Murna of the White neck. Murna was the daughter Tadg mac Nuadat, a druid.

Tadg refused to allow marriage and in desperation Cumal, leader of Fianna, abducted Murna and they fled from her father.  Murna became pregnant and gave birth to a boy whom she called Demna. Tadg was incensed almost to madness and had Cumal killed in battle by Goll mac Morna but the baby, however, was secreted away from him.

The child Demna grew into a fine brave young man, very fair in countenance. So fair was he that his given name Demna was replaced by the name Fionn, and he was henceforth known as Fionn Mac Cumhail. He was always in danger from his vengeful grandfather Tadg and the leader of Fianna. It was decided then that Fionn should be placed into the care of druidess Bodhmall and her husband Fiacal mac Conchinn. He would then become a student under Finn Eces (Finegas), a poet.

and so he was sent to the druid’s settlement along the River Boyne.

Catching the Salmon of Knowledge

Finegas taught the druidic arts to Fionn but he never lost his hope that one day he would catch the Salmon of Knowledge. Every day he would cast his line into the Boyne in the hope of hooking the fish and suddenly one day he hooked a giant of a salmon. He knew immediately that it was the transformed Fintan. He called out in joy and pulled the fish on to the river bank. Calling Fionn he demanded the lad set about building a fire and cooking the fish. He warned the young man not to eat any of the fish and the boy gave his promise.

Finegas was overjoyed, he would be not only the wisest druid in Ireland but the wisest man in all the world, and so, exhausted by his great deed, he took to his bed. Fionn placed the salmon on a spit over the fire and started to cook it. When it was nearly finished he called for Finegas to come for his meal. However, some burning fat from the fish splashed on to Fionn’s thumb burning him. The youngster merely stuck his thumb into his mouth as one does with such a burn. Soon Finegas arrived with his eating salver but immediately recognised that there was something different about his young pupil. He demanded to know whether Fionn had eaten any of the fish. The boy denied this but related to Finegas about the burn he had received. Finegas realised then that it was not his destiny to receive the great wisdom from the salmon, but it was the destiny of Fionn Mac Cumhaill.

After that night Fionn Mac Cumhaill was to become the greatest of all the men of Ireland.