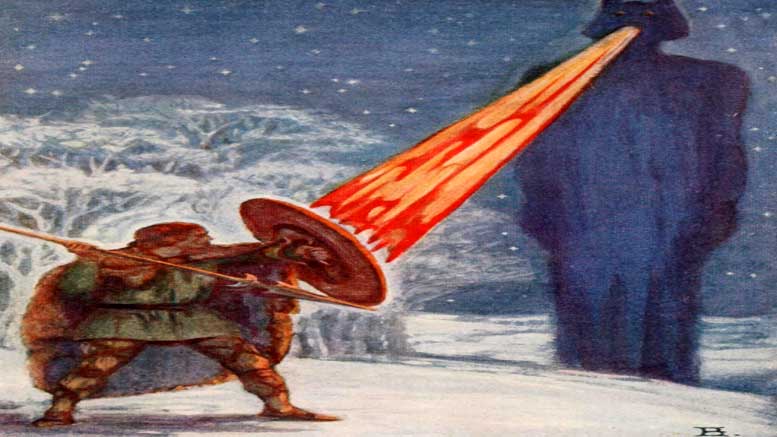 The story of Aillén Mac Midgna is described in the Fenian Cycle of Irish Mythology under The Boyhood Deeds of Fionn, a story covering Fionn mac Cumhaill as a young boy.

Aillén Mac Midgna was a fire breathing goblin from the other world, Mag Mell. Also known as the burner, Aillén was a member of the magical tribe known as Tuatha Dé Danann. He targeted his victims by playing fairy music from his harp causing them to fall into a deep sleep.

For 23 years Aillén brought terror to Ireland’s most sacred location, the hill of Tara, the seat of Ireland’s High King.

Each year, on the eve of Samhain, Aillén would arrive at Tara and play the Irish harp with such enthusiasm causing everyone in the immediate area to fall asleep under his spell.

Once Aillén had cast all of the kings guards asleep he set fire to the great halls of Tara with his fire breathing, leaving nothing but burning cinders behind. When done Aillén would return to his fairy mound at sídh Finnachaid leaving the people to rebuild the great halls.

Nobody could kill the fire breathing goblin because as soon as anyone got close to him they fell asleep under his spell which is why he was able to continue year after year. That is until the Irish hero Fionn Mac Cumhaill learned about the disastrous deeds of Aillén.

Fionn mac Cumhaill to the rescue

A few months after Fionn succeeded in becoming a Fian warrior and chieftain of Clan Baiscne he was told of the fire breathing goblin who was causing chaos at the hill of Tara every Samhain. As Fionn had all the knowledge in the world gained from the Salmon of Knowledge, he made a request to the High King. For leadership of the Fianna, a band of warriors, he would kill Aillén Mac Midgna the fire breathing goblin. With all the warriors in Ireland unable to stop Aillén the burner, the Irish King agreed to Fionn’s request.

Like everyone else, Fionn was not immune to the musical spell from Aillén so he needed a way to avoid falling victim to the goblins magic but how? he wondered.

Another Irish warrior by the name of Fiacha had a poisoned spear but he lacked the knowledge on how to use it.   Fionn mac Cumhaill, on the other hand, knew exactly how to use it, after all, he had all the knowledge in the world.

On Samhain’s Eve Fionn held the spear to his head and inhaled its magical fumes, making him immune to the musical spell from Aillén’s harp. He lay in wait for Aillén to get closer and within reaching distance he stabbed him with the spear killing the goblin to everyone’s joy.

The King, true to his word, gave Fionn captaincy over the Fianna warriors. Its leader at the time, Goll Mac Morna who was Fionn’s enemy, stood down and swore loyalty to Fionn.