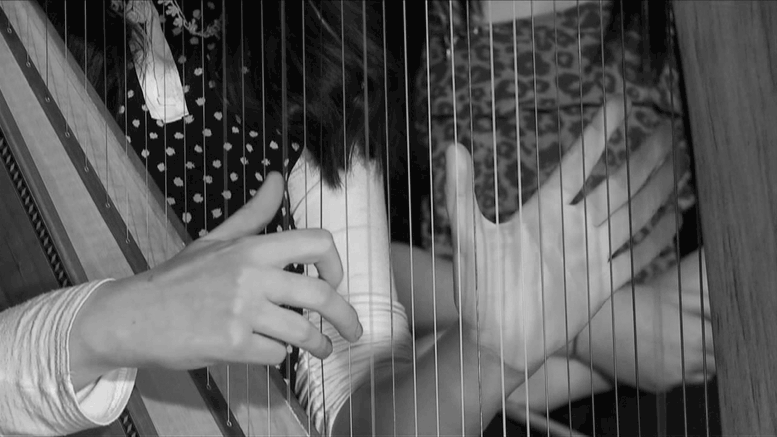 The Irish harp is a famous Irish instrument which has been used for centuries upon centuries. The ancient folk instrument has a beautiful delicate sound but did not always carry the same honor as it does today.

Historical evidence apparently states that harpers in earlier days would have been hanged for their talent. However, Harpers, today flourish throughout the world.

The story has it that the first ever harp was owned by Dagda, a chief among the Tuatha De Danann. At one time during a war with the Fomorians, the gods of cold and darkness, his harp was stolen but later recovered by Lugh and Ogma. When it was returned it had acquired two secret names and the ability to call forth summer and winter. From then on, when Dagda played, he could produce a melody so poignant, it would make his audience weep, he could play an air so jubilant it would make everyone smile, or bring forth a sound so tranquil, it would lull all who listened to sleep. So thus did the harp become the dispenser of Sorrow, Gladness and Rest.

A twelfth Century Archivist, John of Sailsbury once wrote that,

Had it not been for the Irish harp, there would have been no music at all on the Crusades.

Irish Harps from them days differed from the large pedal harps that we see in modern symphony orchestras. They were much smaller and originally held on the Harper’s leg, it leaned against the left shoulder, and had no pedals. They were usually carved in one piece of bogwood.

Trinity College in Dublin holds the Trinity College Harp, one of the oldest surviving Celtic harps, another including the Queen’s Mary Harp. They both date from the 15th or 16th centuries and illustrate the similarity between the Irish and Scottish harps. A distinguishing characteristic of these Gaelic harps was that they were wire-strung, rather than gut strung. The word “harp” has its roots in the Anglo-Saxon, Old German and Old Norse words which mean “to pluck.” In Gaelic, they were known first as cruit and later as clarsach or cláirseach.

Harps are popular all over the world and relate back to ancient Irish history and Irish folklore, tales of mystical stories and more. Research and historical evidence even proves the Egyptians had their own harps. However harps today are not a rare instrument in Ireland as they are the national emblem. It has even taken its place as the Guinness logo.

The Irish harp can create a beautiful soft sound it is so diverse, it can create a romantic, poignant, dramatic, or delighted mood. It is used as a popular instrument to be played at weddings and funerals, as it is an instrument that takes pride in many Irish hearts.