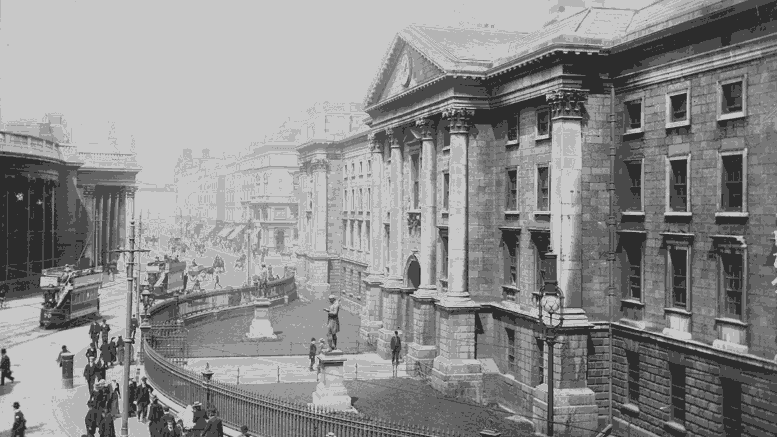 By 1590 English rule was, with the exception of Ulster, firmly secured throughout Ireland. The Catholic Gaels and Old English of Munster, Leinster, and Connacht had been more or less brought to heel, and Presidencies were established over each of them.

English law was dominant and Protestant English planters were laying claim to the lands seized from the Catholics. The present-day counties were already taking shape, these were land divisions modeled on the shires of Great Britain. Queen Elizabeth, I felt that the time was right to bolster up English civility and in 1592 she granted the city of Dublin a charter to establish a university.

The university was to be named “The College of the Holy and Undivided Trinity of Queen Elizabeth, juxta Dublin. It has been commonly called Trinity College Dublin ever since.

The lands and buildings of the college were donated by the city corporation and were originally those of the Augustinian All Hallows Priory which had been suppressed in 1583. This property was situated about half a mile from the city walls.

The first Provost of the university was the Protestant Archbishop of Dublin Adam Loftus. A favorite of Elizabeth I, Loftus had originally been brought over from England and appointed Dean of Armagh in 1565 but his tenure there was a short one as he to flee the wrath of Shane (the Proud) O’ Neill the following year.

In Dublin Loftus was appointed the dean of St. Patrick’s Cathedral and in 1567 he was appointed to the See of Dublin. He had opposition from the Lord Deputy of Ireland Sir John Perrott who had sought to have the university put to St. Patrick’s Cathedral. However, at this time Perrott was under suspicion for having verbally abused her majesty’s legitimacy and was to die in the Tower of London on September 1592.

Within two years of its foundation, Trinity College, consisting of a small square, was up and running with some fellows and a handful of students. Its raison d’etre was to provide a Protestant education and to consolidate the Tudor monarchy. Catholics and Dissenting Christians were not permitted entrance unless they converted to the Anglican faith. Those who did attend were the children of the New English and the children of Old Engish and native Irish who had abandoned their ancestors’ faith, for reasons of dogma or, as was more likely, in order to retain their lands and wealth.

Trinity was, over the next three centuries, to grow into a wealthy establishment. It received appropriated properties and had annuities paid in from the government. In later years it was to be the “the Alma Mater” of many famous men. Sons of the Protestant Ascendency considered it their own during the 17th and 18th centuries but In the 20th century Trinity has managed to adapt to the new Irish state with which it is fully involved in all aspects of Irish education and Irish life, and it is much loved by the Irish people.