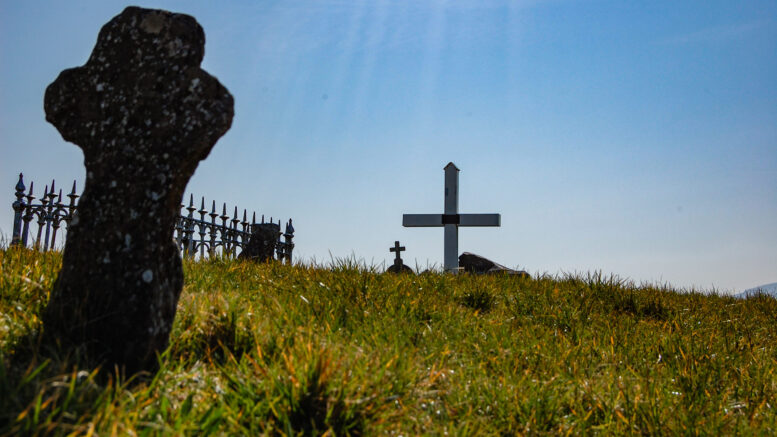 If there is any tradition in Ireland that is common among Irish families it would be that of a burial of a loved one. Although it’s a sad occasion our spiritual & religious beliefs help us get through a mournful time.

There are many ideas on the origin of the Irish wake such as one such myth that originated as a result of the Irish fondness for drinking stout which used to be drunk from pewter mugs and this, unfortunately, had the side effect of causing lead poisoning. The symptoms of this illness was a catatonic state (where the victim appeared to be dead) but would recover a few hours later so friends would watch over the ‘corpse’ to see if they would eventually awaken. We much prefer the belief that it originated with the Celts. They believed when a person died they were moving on to a better one in the afterlife, and that this was a cause to celebrate.

An Irish wake is traditionally held in the home of the deceased or at the home of a close relative; this is known as the wake house. A room will be ready for the deceased. In the past, it would have been a parlor but more often these days a bedroom is used.

The body is washed and dressed; in times gone by they would have been clothed in white. If the deceased was a male he would have been freshly shaved. This is known as being ‘laid out’. Rosary beads are then wrapped around the hands and a cross placed around the neck. Candles are placed at the head and foot of the coffin and stay lit while the deceased is still present in the house. Family members or close friends will stay with the deceased at all times taking it in shifts to watch over the departed. All clocks in the house will be stopped at the time the person died and all mirrors will be covered or turned to face the wall as a mark of respect. Also, traditionally all the curtains will be closed.

The tradition of Keening

In earlier times ‘keening’ would have taken place. This is when the female family members would cry and wail over the deceased. This took place after the body had been laid out if the women started ‘keening’ before the body was ‘laid-out’ it would invoke evil spirits. ‘Keening’ would have carried on for some time. One wonders if this has some bearing on the legend of the banshee. To-day ‘keening’ has faded out of the Irish burial traditions.

Although death is a sad occasion a traditional wake is seldom solemn. Friends and family alike gather and share memories and funny stories about the deceased. Food and drink are always present and although the church tried to ban alcohol from wakes it was unsuccessful.

Visitors entering a wake house will be met by a close family member. After offering their condolences they are then taken into the room where the deceased is laid out. They will then go to the coffin and stand for a few minutes paying their respects or saying a prayer. They will then be taken into the other room and offered refreshments.

Depending on religion the rosary is said twice a day with everyone in the house present to say the responses. There is a special rosary for the dead and is traditionally prayed around midnight before the visitors leave.

A wake can last for a few days to allow people to come from afar to pay their respects and say their good-bye. The wake comes to an end when the body is removed from the house and transferred to the local Church.

On the day of the funeral, the coffin is carried by 6 pallbearers, usually family or very close friends. A Hearse leads the procession to the Church with family & friends following behind the males carrying the coffin. The service lasts approx 45 minutes with the priest and loved ones speaking about the achievements made by the departed. Again, the coffin is carried by family & friends to the cemetery. If the procession is to pass the house of the departed it will stop as a mark of respect. People passing by will also stop, allowing the funeral procession to pass ahead as a sign of respect for the deceased.

Are there cremations in Ireland?

There are cremations in Ireland but they’re more common in the cities. In rural Ireland, people tend to bury loved ones as part of their Irish burial traditions.