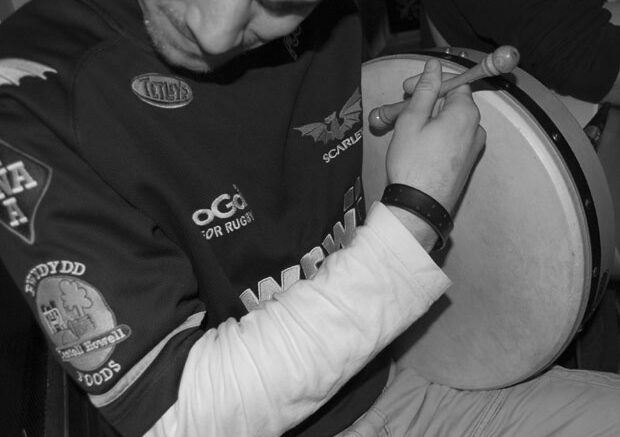 The bodhrán is an Irish framed drum and ranges from 25 to 65cm in diameter. The bodhrán is made from goats-skins, tacked to one side. (Synthetic heads or other animal skins are sometimes used.) On the other side, one hand is placed against the inside of the drum controlling the pitch and timbre.

The bodhrán is a popular instrument used in a traditional Irish band. It creates a deep almighty tone and works well accompanied by a fiddle, guitar, harp, etc, or as a solo performance. It is known worldwide as a strong Irish instrument that gives very entertaining and lively performances to its audiences.

The Bodhrán in battles

During the Irish rebellion of 1603, the Irish forces used the bodhrán as a battle drum. Providing a cadence for the pipers and warriors to keep to. It would also announce the arrival of the army. Some believe it was derived from an old Celtic war drum. Seán Ó Riada, an Irish composer, and arranger of Irish traditional music declared the bodhrán to be the native drum of the Celts.

The Bodhrán is similar to those frame drums distributed widely across northern African from the middle east and has cognates in instruments used for Arabic music and the musical traditions of the Mediterranean region.

The origin of the instrument may have been from the skin trays used in Ireland for carrying peat. The earliest bodhrán may have simply been a skin stretched across a wood frame without any means of attachment.

How to Play The Bodhrán

The drum is mostly played in a seated position, held vertically on the player’s thigh. It’s supported by his/her upper body and arm, usually on the left side, for a right-handed player. The hand is placed on the inside of the skin controlling the tension and therefore the pitch and timbre. By applying varying amounts of pressure and also the amount of surface area being played, with the back of the hand against the crossbar, if present.

The drum is struck with the other arm and played either with the bare hand or with a lathe-turned piece of wood called a “bone”, “tipper”, “beater”, or “cipín”.