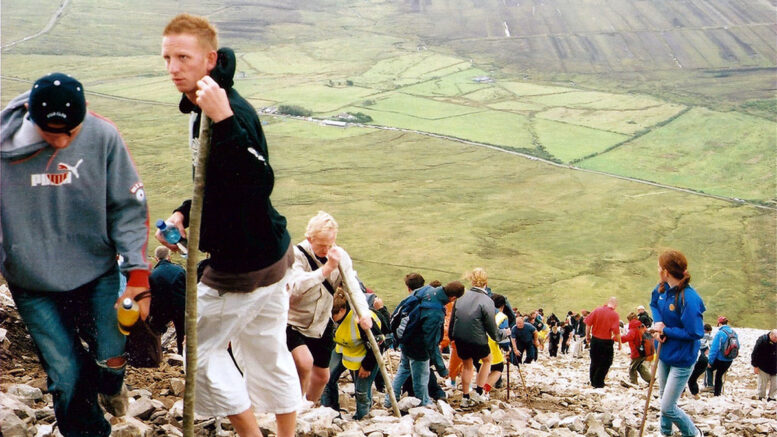 Croagh Patrick is a mountain in county Mayo also known as The Reek or Patrick’s sacred mountain. Each year thousands of people climb Croagh Patrick on a pilgrim to honor the patron saint of Ireland. The pilgrimage to the summit of Croagh Patrick takes place on the last Sunday of July, which also coincides with the pagan festival of Lughnasadh.

The mountain is significant in Irish history and is considered a place of worship predating the arrival of Christianity in Ireland. It was believed Irish druids celebrated Lughnasadh by climbing to the summit of Croagh Patrick, a common practice during the August festival.

In the 5th century, St Patrick climbed to the summit of Croagh Patrick and completed a forty-day Lenten ritual of fasting and penance. An archaeological excavation performed during the ’90s discovered the remains of a small chapel dating to the time of St Patrick

The last Sunday in July is called Reek Sunday and its when the pilgrimage starts. It is estimated that between 30,000 – 40,000 make the pilgrimage each year, most of them on barefoot. From children to elders, the pilgrimage is considered an important event to complete.

Feature image by Alan James and licensed for reuse under the Creative Commons Attribution-ShareAlike 2.0 license.