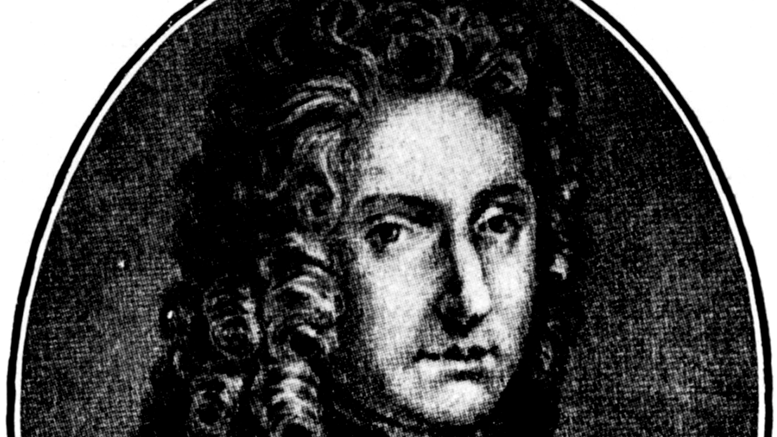 Patrick Sarsfield is thought to have been born on his family estate near Lucan in County Kildare in, or around 1650. His father, also Patrick, was of Anglo-Norman descent and his mother, Anne, was a daughter of the great Gaelic chieftain, Rory O’ Moore, who helped organize the rebellion of 1641.

Patrick was a second son but he inherited the estate when his elder brother William died in 1675. William had no male heir, only a daughter, Anne.

It is thought that Sarsfield was educated in a French military academy and that his first commission was as an ensign in the Duke of Monmouth’s regiment serving in Flanders and in France during the war against Louis XIV and again in the war against the Dutch. In 1678 his listed as a lieutenant in Monmouth’s Regiment of Foot and also in the same year as a captain in Sir Thomas Dongan’s Regiment of Foot. After his continental service, Sarsfield turns up as a lieutenant in Charles ll‘s private regiment of aristocratic guardsmen. For that time it is not unusual to find officers commissions in different regiments and with different ranks simultaneously.

In 1681, Sarsfield challenged Lord Grey to a duel for insulting the Irish people but this was not acted upon and in the same year he was wounded in the shoulder when acting as a second on behalf of Lord Kinsale at his duel with Lord Newburgh. He is also thought to have been involved in the abduction of an heiress with a view to marriage but that she rebuffed him, obtaining her freedom on the promise that she would not prosecute him. He went on to marry Lady Honor de Burgo a daughter of the Earl of Clanricarde.

The battle of Sedgemoor

In 1685, when the Duke of Monmouth went into rebellion against the new Catholic King James ll, Sarsfield remained loyal to James ll, even though Monmouth’s sister had been married to his elder brother William Sarsfield. As a member of the Horse Guards Regiment, Patrick participated in the battle of Sedgemoor and was severely wounded, however, James’ forces won the day and Monmouth, captured, was beheaded for his treason. In reward for his bravery and loyalty, Sarsfield was granted lands in Kildare and raised to the rank of Lieutenant General in the 4th Regiment of the Horse Guards.

William of Orange takes the throne

In Ireland at this time, Protestants were frightened that the new Catholic king would allow the Catholics to seek revenge for the persecution and deprivations they had suffered not only from the Cromwellians but also from Charles ll. Indeed, under the direction of the newly appointed, Lord Deputy of Ireland, The Earl of Tyrconnell, Richard Talbot, Catholics began to replace Protestants in government positions in Dublin. When the Protestants of England decided to invite the Dutch prince, William of Orange, to take over the throne, he consented. James faced with massed desertions of his nobles and his officers were forced to go into exile in France after the Williamite War in Ireland.

In 1689 James ll came out of exile into Ireland and along with him was Patrick Sarsfield. It is recorded that Sarsfield in command of a force of 500 men operating around Lough Erne and Ballyshannon had suffered defeats at the hands of Williamite forces from Enniskillen. King William’s forces were winning battles in Ulster, the city of Derry was relieved from a siege laid down by the Jacobite army.

Sarsfield was a daring and courageous soldier whose men respected and trusted him. His greatest success was at the first siege of Limerick and for this, he was made the first Earl of Lucan and given the rank of Lieutenant General.

The battle of Limerick

In July 1691, Sarsfield was serving with the French General, the Marquis de Saint Ruth at Aughrim but the Williamite forces were able to outmaneuver them and inflict terrible losses of over 7000 men, upon the Jacobites. By this time James had not only fled the field at the battle of the Boyne but had fled Ireland for the safety of France. It was left to Sarsfield to hold what he could so he took his army to Limerick where they tried to repair the crumbling walls. At Limerick, they were besieged by an army under Baron van Ginkel. St. Roth the Jacobite leader literally lost his head to a cannonball and the defense of the city was left to Sarsfield.

The battle for Limerick was very intense with both sides suffering heavy losses and recognizing the futility of a long siege Sarsfield sued for terms. Baron van Ginkel, just as keen as Sarsfield, to halt the killings, was very generous. He would allow Sarsfield, with his officers and men, their regimental colors and accompanied by their families to decamp for France. He also offered treaty terms that would permit the retention of holdings and the freedom for religious worship.

On arrival in France, Sarsfield and his army continued to serve the Jacobite in the Irish Brigade, which was part of the French army. He was to see service in Flanders and received a commission as Lieutenant General from Louis XIV.

In 1692 Sarsfield was to enter into correspondence with Van Ginkel and received a gift of two horses from him. That his one-time foe would do this is not surprising for those who had been his enemies on the battlefield were as one in praising Patrick Sarsfield as a man and as a soldier.

His valour, and the bravery of his Irish “WILD GEESE”, on the battlefield was again rewarded when he was appointed as Marshall in 1693. That same year however he was to receive a chest wound during the battle of Landen when once again he would be lined up against William of Orange. He was to die three days later and it is reported that as he watched his blood flow he said: “that this was for Ireland”.

Robert Emmet and the Rising of 1803