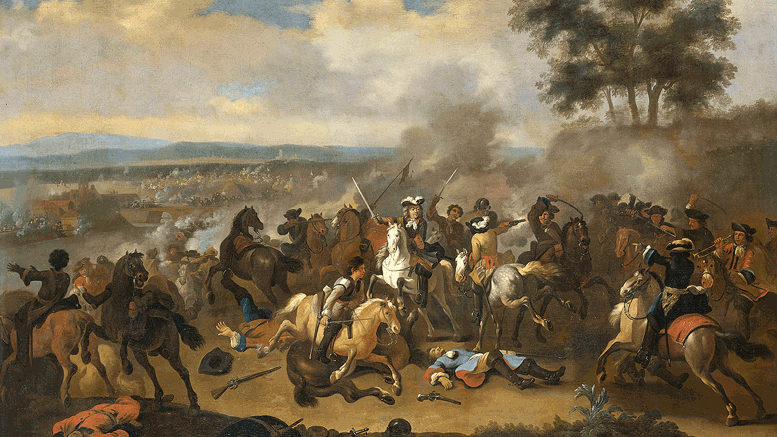 To the Irish, the Williamite War was known as An Cogadh na dá Righ (the war of the two Kings) but in reality, it was merely a part of the dispute between William and King Louis XlV of France.

King Louis of France had aided and sheltered King James ll after his escape from London in 1688. The Irish, particularly the Catholics, were, by and large, supportive of James although William did enjoy support in the northern province of Ulster where many Scottish and English settlers had taken land during and after the plantations of Ulster. These settlers were fearful of a repeat of the massacres that occurred during the 1641 rebellion.

In Ulster, an army loyal to James had been raised by Alexander MacDonnell, the 3rd Earl of Antrim and had positioned itself on the eastern shores of the Foyle close to the city of Derry. In County Down, some 2,000 Jacobite troops marched north from Drogheda and engaged a force of 3,000 Williamites at Dromore in County Down.

The Williamites, who had earlier attempted unsuccessfully to take Carrickfergus, were routed and fled the field. Their commander Lord Mount Alexander fled to England.

The Jacobite forces led by Richard Hamilton then progressed to Derry and joined with the Earl of Antrim’s force. The City which had a Protestant garrison closed its gates to them and the citizens declared for King William.

The siege of Derry begins

The combined Jacobite force then laid siege to Derry on 18th April 1689. The siege of Derry was to last 105 days when the city was relieved on 28th July 1689. It has the distinction of being the longest siege in Irish history.

James ll arrived in Ireland at Kinsale on 12 March 1689 along with 6000 French soldiers. They moved north to Dublin where he gathered reinforcements of Irish Jacobites and Protestant Royalists. With this larger army, he proceeded to Derry joining with the Earl of Antrim and Richard Hamilton.

James also called a parliament (composed mostly of Irish Catholic gentry) in which he declared that England would have no power over Irish affairs. He also granted back to the Irish the lands confiscated from them by the Cromwellians.

In the meantime, Protestants loyal to William were operating guerrilla attacks out of Enniskillen into Connaught and Ulster. They defeated a poorly trained Jacobite force from Dublin at NewtonButler killing 1,500 of them.

In Derry, on 11th June, British warships had arrived in Lough Foyle to relieve the city but were fearful of the Jacobite gun batteries. Then under orders on 28 July 1689, three merchant ships, The Phoenix, the Mountjoy and the Jerusalem, protected by the Royal Navy frigate Dartmouth were able to gain entry to Derry when HMS Dartmouth crewmen broke the boom across the river at Culmore. The city had lost around 8,000 of its population of 30,000. After these setbacks the Jacobite forces pulled back out of Ulster and regrouped at Dundalk. As they went they applied a scorched earth policy to deny the Williamites food supplies.

The Williamite forces were put under the control of 1ST Duke of Schomberg who had arrived in County Down in August 1689. He immediately set about capturing Carrickfergus. Schomberg then turned his force southwards to Dundalk. He found that his way was blocked by the Earl of Tyrconnell but the two armies did not engage in battle.

Disease broke out in the Williamite camp and they were also constantly harassed by Irish guerrillas called Rapparees. (From Irish Rapaire, a pike). Due to hunger, disease and harassment, several thousands of Schomberg’s troops died. On 14th June 1690 William of Orange arrived in Belfast Lough with a force of 36000 men. They were made up of English, Dutch, German-Danish and French Huguenots soldiers. This army turned south with the capture of Dublin in mind.

The Jacobite forces attempted to halt the Williamite army at Newry but this failed so James 25,000 strong army took up positions on the south bank of the River Boyne at Oldbridge near Drogheda. The battle was fought on 1st July and due to a flanking manoeuvre by a quarter of William’s forces to the ford at Slane 6 miles east of the battlefield, James became fearful and pulled back his men. Out of the 60,000 combatants on the field, only 2,000 perished, amongst them Schomberg and George Walker who had held Derry for William. The Irish infantry, demoralised by James’ retreat began to desert him.

Afterwards the Irish, in contempt, would refer to him as Seamus an Chaca….James the shit. James fled to Duncannon and from there on to France. King William took Dublin two days after the battle. The Jacobite army fled over the Shannon to Limerick where they would become the besieged and finally defeated by the Williamites.