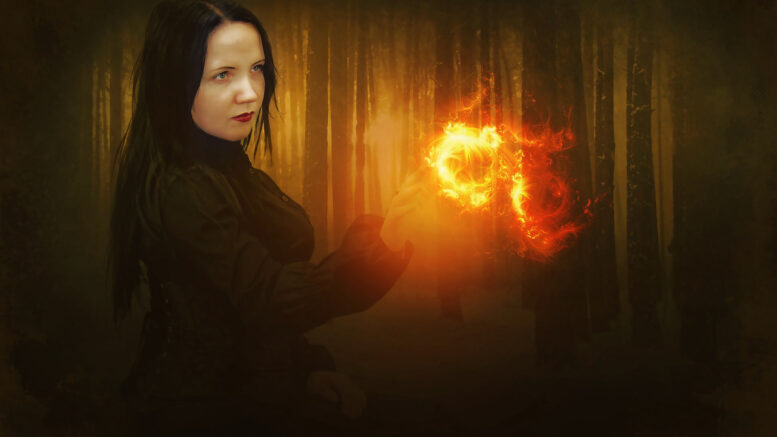 In the Mythological Cycle of Irish mythology, during the time of the Tuatha Dé Danann, Ireland was invaded by a Celtic Witch by the name of Carman. A witch of magic she was a Greek warrior from Athens who invaded Ireland with her sons, Dub (darkness), Dothur (evil), and Dian (violence).

Attacking the Tuatha Dé Danann, the people of goddess Danu, she used magical powers to destroy all the crops in Ireland causing a major blight. Her sons destroyed everything that stood in their path.

The Tuatha Dé Danann thought the attacks on Ireland were evil so-called upon four members to challenge Carman and her sons. The four members included the god of poetry (Ai Mac Ollamain), a white sorceress (Bé Chuille), a satirist (Cridhinbheal), and a magician (Lugh Laebach).

Using their magical powers they banished each of the evil sons from Ireland for as long as the land was surrounded by water. Carman proved to be more difficult to defeat. Finally after a magical spell cast by Bé Chuille her magic was subdued.

Chained up and imprisoned, Carman died of grief in 600 BCE. Before her death, she requested ta fair be held in her honor at her burial place.

The Óenach Carman, a fair, was held during the harvest festival Lughnasadh at the beginning of August. The Óenach Carman was held every 3 years, taking 2 years to prepare. For holding the fair the Leinstermen, who were leaders, were promised full harvests, freedom from being controlled, and there would be cheer in every household. If they failed to hold the Óenach Carman, Ireland would face major famine.

The fair for Carman was a gathering of people involving tribal business, horse-racing, cattle shows, sporting contests, and rituals to ensure good fortune.

Óenach Carman wasn’t the only fair to be held in Ireland. Tailten, Tlachtga, Uisnech, and Raigne were also similar gatherings.