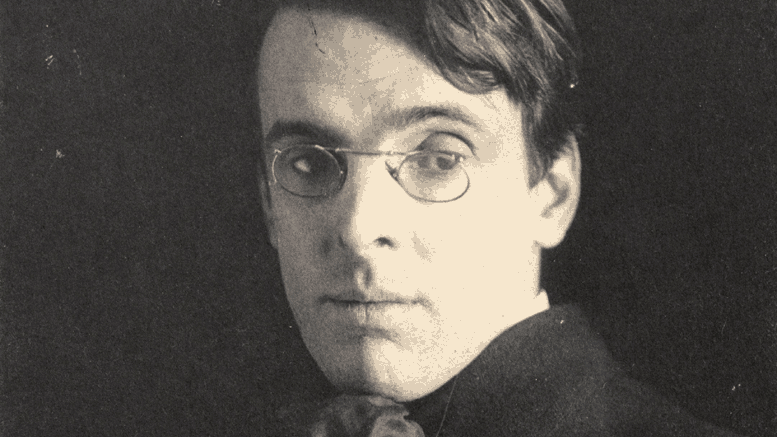 William Butler Yeats, poet, playwright and Irish nationalist was born in Sandymount, County Dublin on July 13th, 1865. His father, John, was a portrait painter and non- practicing barrister. The family were Anglo Irish and descended from a linen merchant, Jervis Yeats, who had served in the army of King William of Orange. Yeats mother Susan Mary Pollexfen, was a member of a wealthy Anglo Irish family of County Sligo. Their money came from Shipping and Milling.

Shortly after his birth, the Yeats children were removed from Sandymount to the Pollexfen home at Merville in Sligo. Here they spent their childhood under the care of their maternal Grandparents. In Sligo, the young William grew up in a time of great change for Irish society and in particular for the Protestant Anglo Irish Ascendency who had until now, controlled Ireland.

In 1867, John took his wife and five children to live in England but, unable to make much of a living he was obliged to return to Dublin in 1880. Here William was to meet many of Dublin’s literary class at his father’s studio and also to produce his first poetry and an essay on the Ulster Scottish poet Sir Samuel Ferguson. Yeats poetry at this time was heavily influenced by Shelly and the works of the 16th century English poet Edmund Spenser. As his work developed, Yeats began to draw his influence, more and more, from the Irish folklore and myths of his beloved county Sligo.

In 1889 Yeats published the “The wanderings of Oisin and other poems”. In 1893 he was to bring forward his collection of Essays entitled ‘’The Celtic Twilight’’ followed in 1895 by “Poems” in 1897 by “The Secret Rose” and in 1899 he produced his poetry collection ‘’The Wind among the Reeds.’’

Besides his poetry and essay writing, Yeats had also developed a life-long interest in things esoteric. He attended séances and was a prominent member of “The Golden Dawn” a secretive and Rosicrucian type movement, into which he was to introduce the heiress Maud Gonne.

Yeats had first met the beautiful firebrand nationalist Gonne in 1889 and immediately fell in love with her. He is said to have proposed to her a number of times. However, his love for her was unrequited and Yeats was horrified when in 1903 Gonne converted to Catholicism and married fellow nationalist Major John MacBride a man whom he hated. This marriage, to Yeats delight, did not survive and the couple parted though dia divorce was not granted to them. Yeats infatuation with Maud Gonne was rewarded by her giving herself to him on one occasion in 1908.

As the demand for the political separation of Ireland from Britain grew, Yeats became more involved with fellow nationalist literati such as Lady Gregory, Seán O’ Casey, J.M.Synge, and Padraic Colum. These were to be the leading lights of the Irish Literary Revival and through them, the Abbey Theatre was established to produce plays that were Irish and Celtic in theme.

Although strongly nationalist in belief, Yeats was not able to participate in the violence of 1916 Easter Rising.

He did reflect on that violence in his poem “Easter 1916”

We know their dream; enough
To know they dreamed and are dead;
And what of excessive love
Bewildered them till they died?
I write it out in a verse-
MacDonagh and MacBride
And Connolly and Pearse
Now and in time to be,
Wherever green is worn,
Are changed, changed utterly;
A terrible beauty is born.

In 1917 Yeats married Georgie (George) Hyde Lees whom he had met in 1911. She was 25 years old and bore him two children, Anne and Michael. Georgie shared Yeats fascination with mysticism. She was especially fond of automatic writing. She also aided him in his poem “A Vision” written in 1925.

In 1916 he produced the first volume of his autobiography “Reveries Over Childhood and Youth”. The second volume, “The Trembling Veil” was produced in 1922.

In 1922 the Free State Government appointed him a Senator in Dáil Éireann. In this role, he was to come into headlong collision with the Catholic Church over the subject of divorce. He forcefully put forward the position of the non-Catholic population on the subject pointing out that if the Catholic attitude was to be supreme then they would have no chance of ever persuading the Protestants of the North to abandon partition. In 1923 Yeats was awarded the Nobel Peace Prize.

In his later life, Yeats was to question whether Democracy was the right way forward. He became interested in Benito Mussolini’s Fascist movement and also wrote marching songs for the Irish Fascist Eoin O’ Duffy, leader of the Blue Shirts. In these years he also had a string of affairs although he and Georgie remained married to each other.

The death of William Butler Yeats

In the early 1930’s he was to leave Ireland for the Mediterranean, as his health was beginning to fail. Despite this, he continued to write challenging poetry right up to his death in 1939. He died and was buried in the French town of Rocquebrunne, and in 1948, in fulfillment of his own wishes, his remains were repatriated and interred in Drumcliffe Cemetery, under Ben Bulbin’s Head, in County Sligo.