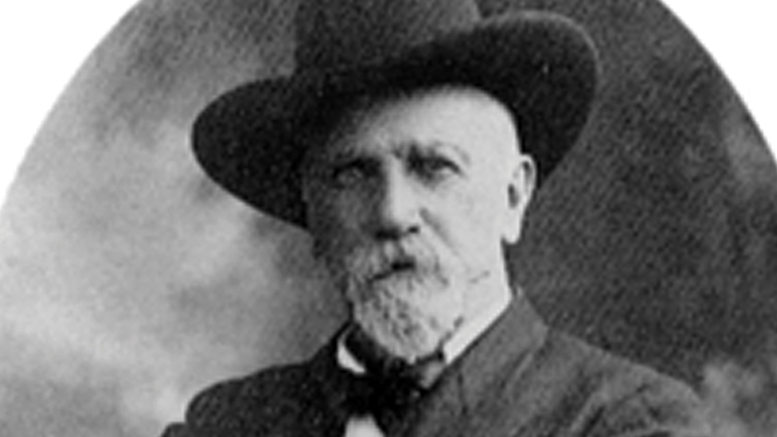 Jeremiah O’Donovan Rossa was an Irish revolutionary. Born on 18 September 1831 devoted over 60 years of his life to Irish independence. Born in Reenascreena, West Cork, he was the son of a tenant farmer, Dennis O’Donovan and his wife Nellie.

The early life of Jeremiah O’Donovan

As a native Irish speaker, he had a love for Irish customs, songs, poems, stories like most children. He was a keen learner and at a young age found an interest in politics from his uncle, a member of the Repeal movement formed by Daniel O’Connell. Inspired by O’Connell’s speeches he enjoyed the parades and atmosphere at political rallies.

When the Great Famine of 1845 (An Gorta Mór) struck the area of West Cork was greatly affected, including the O’Donovan household. Food and income became scarce leaving his parents to struggle to pay rent for their farm. After his father passed away in 1847, due to an illness caused by serve starvation. His mother left with no other choice, auctioned their household possessions. A year later she emigrated to America with Jeremiah remaining in Ireland working in the town of Skibbereen.

After witnessing the events of the famine first hand, O’Donovan Rossa placed the blame on the British. Angered at the deaths of so many Irish people and the large scale emigration his determination for Irish freedom grew.

In 1856 the young O’Donovan Rossa formed the Phoenix National Literary Society. The society was for the liberation of Ireland by force of arms and was formed after inspiration from the Young Irelander rebellion of 1848.

Two years after being formed the Phoenix National Literary Society merged into the newly created Irish Republican Brotherhood (the Fenians ) to become a more organized movement.
With O’Donovan Rossa an active and effective recruiter for the IRB they began preparing for a future rebellion. Under the cover of night, the IRB volunteers would hold drills, training men on how to use pikes and rifles.

In 1859 he was arrested for sedition and jailed for 8 months. On release, he began to write for the nationalist newspaper “The Irish People” and worked his way to become its business manager. Unknown to Rossa or other staff members a spy working for the Dublin Metropolitan Police was among them. Pierce Nagle, the spy, found a letter describing how 1865 would be the year of action and ‘the flag of Ireland, of the Irish Republic, must this year be raised.’ Nagle passed the information over to his handlers in the police force.

On Friday 18 September 1865, Dublin Castle authorized that the leaders of the “Irish people” newspaper be arrested. Rossa and other volunteers were convicted of high treason and sentenced to life imprisonment. Serving his time in a variety of English prisons he faced brutality at the hands of the guards and governors. Punishment often included only being served bread and water, having his hands cuffed behind his back for 34 days, and being stripped naked with his bedding removed his cell.

During his time in prison, the Fenian Rebellion of 1867 occurred but due to bad leadership and spies, the uprising was a failure.

After the earl of Devon led an inquiry into the treatment of Fenian prisoners, O’Donovan Rossa was offered a conditional amnesty in 1871. He was released under the condition he was not to return to Britain or Ireland. On release, along with 4 other Fenian prisoners, they set sail for New York on board the transatlantic steamer called SS Cuba.

After emigrating O’Donovan Rossa became active within Irish nationalist circles, such as Clan na Gael, in New York. He established a newspaper that openly called for violent rebellions against Britain’s involvement with Ireland. His wife of 40 years, Mary Jane O’Donovan Rossa took over as editor of the newspaper.

He became responsible for managing the skirmishing fund, set up to raise money for a bombing campaign on British soil between 1881 – 1885. He created a ‘dynamite school’ in Brooklyn to teach volunteers on using dynamite for attacks. The British government made an attempt to have him extradited but their efforts failed.

During 1885 an assassination attempt was made on his life. An English woman, Lucille Yseult Dudley, shot him multiple times at Broadway, he managed to survive the attack.

He returned to Ireland in 1894 and toured the country attending political rallies as well as unveiling a memorial to the Manchester Martyrs in Birr, Co. Offaly.

The death of O’Donovan Rossa

In 1915 his own deteriorated and he died in Staten Island on 29th June 1915. Under the orders of the IRB, he was to be returned to Ireland at once with Tom Clarke said ‘had he chosen a time to die he could not have picked a better time.’

On his return to Ireland, he was given a hero’s welcome.  Approximately 60,000 people lined the streets for his funeral procession on August 1, 1915.

His coffin covered in wreaths laid on an open carriage pulled by four horses. The Irish Volunteers, with rifles, performed the guard of honor. 6,000 people were part of the procession including several companies of the Irish Volunteers.

At his burial, in Glasnevin Cemetery a graveside oration was delivered by Patrick Pearse. It would become one of the most famous speeches of the Irish independence movement.