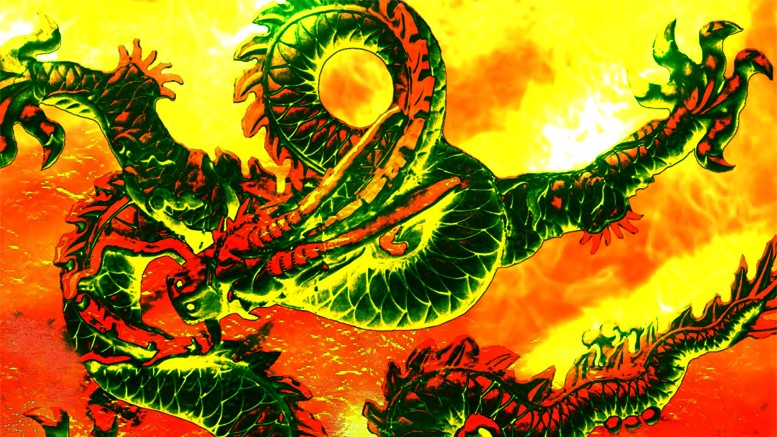 Ireland is a land of myth and mystery, a land rich in stories of the supernatural, of the fantastic. Even today, although a modern outward-looking nation, the Irish hold close to their hearts the tales told by their ancestors including the last serpent of Ireland. Every county, every parish and every townland has its own story which thrills young and old hearts alike.

The scenic Sperrins & its serpent

In the northwest of the island lies the county of Derry. It is a beautiful county of low lying plains and picturesque uplands. Dividing the north of the county from the south, are the Sperrin Mountains, which form a protective crescent around the beautiful valley of the river and lough Foyle.

The Owenreagh River rises on the slopes of the Sperrins, in the parish of Banagher, and in its journey northeast, it has cut a deep wooded glen. The glen is rich in wildlife and on a summer’s day its peacefulness is shattered only by the lowing of cattle and the shrieks of buzzards. However, it was not always so peaceful.

The fire breathing dragon of Banagher

In the latter years of the 6th century, not long after the death of St Patrick, the national apostle who was very active in the northwest, the people of the area were terrorized by a great serpent, a dragon with the ability to breathe fire.

The serpent laid waste to the land from the slopes of the Sperrins to the shores of Lough Foyle and became known as “Lig na Paiste”, meaning the last of the serpents. It had been missed by St. Patrick who, years before, had exiled all of the serpents from Ireland with the exception of Paiste.

In despair, the people now turned to a local holy man, Murrough O’ Heaney, for deliverance.  This holy man had a church in the glen. It is known today as Banagher Old Church and its ruins can still be seen as can the grave of the saint.

St. Murrough fasted for ten days and nights, praying to God for the power to defeat Paiste and God gave him the knowledge of how to capture the beast.

The capture of Paiste

Strengthened by God’s power the Saint went to the lair of the beast which was a deep pool in the river. He took with him three rods made from river reeds. The beast, seeing the man approach him, was intrigued. He thought the Saint was to be a sacrifice sent to appease him by the locals.

St. Murrough called out to the serpent to allow him, in God’s Name, to place the reeds upon him. This amused the serpent and he thought it was part of the sacrificial rite so he allowed St. Murrough to approach him and lay the rods about him.

Immediately the reeds touched the serpent, St. Murrough made the Sign of The Cross and called upon God to change the rods to steel. This God did and the serpent was clamped in an iron cage from which he was unable to escape.

Although Lig na Paiste begged the Saint for mercy and freedom the saint refused. He declared the serpent sinned against God’s people. He would be bound forever in his cage and cast into the depths of Lough Foyle.

The serpent then asked one favor, that he would be allowed to look upon the Ciannact from his watery prison. St. Murrough relented and this he allowed. The Ciannacht is the area from Banagher and the Sperrins to the shores of Lough Foyle.

This is the story of Lig na Paiste. Some say he still coils and writhes under the waters of Lough Foyle in a vain attempt to free himself from his cage which was forged by God himself.  It’s still believed by some that Paiste is responsible for the unusual currents and high tides of Lough Foyle.