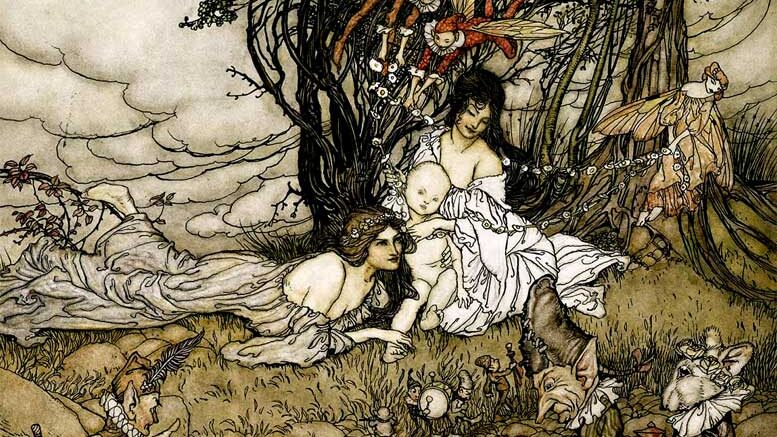 In Ireland, the Faerie folk are always treated with respect, but many accusations are hurled at them as well, from making crops wither to milk turning sour. One of the most common accusations is that they steal humans and spirit them away to live in the Faerie realm, whilst leaving an unwanted faerie in their place, which becomes known as a Changeling.

Humans at risk of being taken are said to include, handsome young men as they are taken to become lovers of the female Faeries. One theory why this happens is that the Faeries see humans as a stronger and healthier race and try to enhance their own bloodline by breeding with humans. Midwives and new mothers are also favoured by the Faeries because they can be made servants of the Faerie queens and easily tend to the Faerie children. It is said that Faerie women find childbirth very difficult and if the pregnancy even lasts until birth then the Faerie babies that survive are often deformed and stunted.

Very occasionally, some people leave the mortal world to live in the Faerie realm by choice. They don’t usually stay in the Faerie realm for life and will return to their home after several years. Of course, none of them returns the same person after so long in the Faerie realm and often people will recognise that these people have ‘changed’ in some way. Traditionally, the person who returns will possess a ‘gift’ of some type and may be a master of herbal or magical knowledge.

Humans most at risk of the Faeries are babies and young children. It is suggested that babies are taken as it is easier to integrate them into the Faerie community and there is less chance of them remembering their real parents. When they are taken, a Faerie child, disguised to look like the human child, is left in their place hence the name, ‘Changeling’. Although most Changelings don’t get to return to the Faerie realm, there have been tales of this happening and the Human child finally returned to its rightful family.

The Faeries envy human babies as they tend to be happy, healthy, and sturdy beings. On occasion, they have been known to take a child because they simply believe it is not loved enough by its human parents or even take the child out of malice or spite, especially if someone from that family has disrespected someone from the Faerie Realm. One can never be too sure what a Faerie’s motive is.

How to recognise a Changeling?

It is said that you can tell a Changeling baby by the fact that it is ill-tempered and looks wizened in appearance. Most will have very dark eyes and if you look into them you can see wisdom well beyond their age. A Changeling will also grow and develop a lot quicker than a human baby and within a few weeks the Changeling will have a full set of teeth and their legs and arms will be quite bony and thin.

A changeling doesn’t always appear as a baby and occasionally the Faeries will leave a piece of enchanted wood called a ‘stock’ in the cradle instead. This stock will appear to grow sick and die right in front of the ‘parents’ eyes.

In a small village on the Cavan/Leitrim border, there was a man who was said to have been taken as a baby by the Faeries but was returned 10 years later much to his family’s joy and amazement. His story of being a real changeling is still told to this day.

Methods of returning a Changeling

The changelings’ new family will never have any good luck while the changeling resides in the family home as the changeling will drain the family of any good fortune that will come their way. A warning though to all those people who become parents to a changeling, it must be loved and cared for like it is your own if you ever want to have a chance of seeing your own child again.

The unspoken threat is that if the changeling is harmed or abandoned in any way, the Faeries will treat your child just as badly or possibly even worse, a risk any parents would not be willing to take.

However, don’t despair! There are certain methods one can use in the event of returning a Changeling from where it came from and ensuring the safe return of the child that has been taken. Below you will find some of the most traditional methods used.

In Ireland, it is wildly believed that the Faeries are terrified of fire and some alleged Changelings have been badly burned or even killed by the efforts of others in order to make the Faerie leave.

The Story of Bridget Cleary

“Are you a witch or are you a fairy? Are you the wife of Michael Cleary?”
(Irish Nursery Rhyme, circa 1895)

Bridget Cleary was said to be a quiet, polite independent woman who worked as a seamstress and was married to Michael Cleary. With no children after nearly ten years of marriage, Bridget enjoyed her own company and often took walks around the nearby by ‘Fairy Forts’ on her way to visit neighbour’s and customers.

After a harsh and unforgiving winter, the 26-year-old woman fell ill during March of 1895. Taking to her bed, her husband Michael, fetched for the nearest doctor. However, it would be more or less a week before the Doctor would arrive. In the interim Michael watched his young wife deteriorate badly and in desperation used herbal medicine to help her whilst becoming obsessed with the notion that Bridget had been abducted by Faeries and was now a Changeling. This led to Michael and a few fellow villagers, trying to cast the ‘changeling’ out by extreme methods which ultimately led to Bridget being found in a Shallow grave, her body burned in an attempt to get rid of the Faerie which was ‘possessing’ her.

If all else fails

If attempts at returning the changeling fail the unlucky ‘parents’ can expect the Changeling to grow up to be a snivelling, dim-witted person who will no longer be a changeling but will be known as an ‘oaf’.

So if the Changeling becomes an oaf, what becomes of the human child living in the Faerie realm? Some are reported to pine and grieve so much for their loved ones in the mortal world that they wither and die. While others can adapt quite well and live happily within the Faerie realm enjoying a long life filled with cheerfulness, Irish music and Irish dancing.