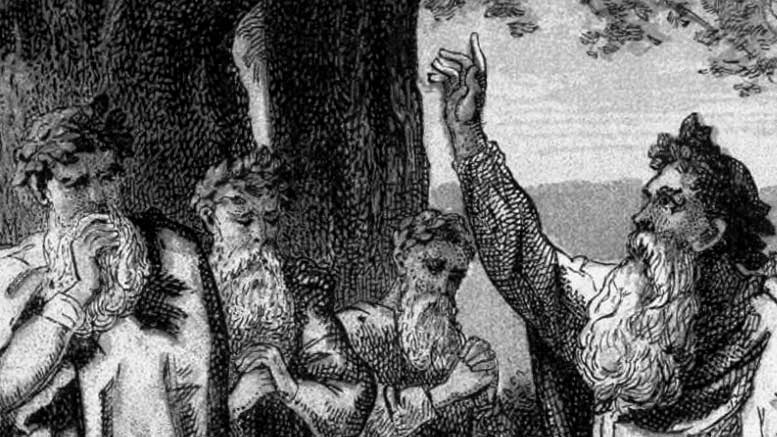 Cathbad was an Irish Druid in the Ulster Cycle of Irish mythology. He was one of Ireland’s most powerful Druids for his time who gathered a retinue of a hundred followers.

The ancient pagan Irish worshipped myriad Gods and Goddesses. The Celtic culture became dominant throughout the island, sometime around 500BC. Society was based on highly stratified classes descending downwards from the king (Rí) to the lowest slave.

One class, which was highly respected and probably feared by all the other classes, was the Druids (Modern Irish Draoí). The druids were responsible for the melding and protecting of all Celtic society throughout all the lands they lived in. They were the philosophers, the teachers, the healers, the lawgivers, the magic makers, and as such they wielded great power in the Celtic world.

Geographers and militarists, such as Julius Caesar and Strabo, made mention of the druids and their influence over the Celts. In addition, Rome regarded them as a threat to their own plan of conquest.  In 60AD the Roman Legions in Britain massacred hundreds of druids and their followers.

Although the druids in Ireland scorned the written word, relying heavily upon the oral dispensing of knowledge, we do know some of the names of the more influential ones.

Cathbad the Druid of Ulster

The Irish mythological accounts, known as the Ulster Cycle, recount some of the deeds of Cathbad (Cathbhudh, pronounced Ka’vu), the druid in the court of Conchubhar Mac Nessa, king of the Ulaidh. This court was centered in Emain Macha (English Navan Fort) just four miles from modern Armagh city.

We don’t know exactly when or where Cathbad was born. However, we do know that he was married to Maga. He fathered three daughters, Dectinne, Elbha, and Fionncham. Dectinne was to give him a famous grandson, Setanta, otherwise known as Cú Chulainn. From Elbha, whose husband was Usna, he received Naoise, Ainle, and Ardán.

Fionncham, in turn, fathered Conal Cernach the finest warrior of the royal guard known as the Red Branch Knights. Although Cathbad has no recorded blood-sons he did foster Crom Deroil and Crom Dairail. Both became druids in the court of Meabh and Ailill the rulers of Connacht.

Most druids would have a small number of student followers but Cathbad’s renown as a druid was such that he’d gathered a retinue of 100 followers. However, his power seems to have gained impetus when a girl, Ness daughter of Eochaidh Sálbhuie and wife of Fachtna the king of Ulster, requested divination from him. He said that the hour was auspicious for a king to be conceived by her. It was indeed auspicious as Ness fell pregnant with Conchobhair who would be the future king of Ulster and it is thought by many that Cathbad himself was the baby’s father.

Many children were sent to Cathbad to be educated in the law, magic, war, etc. One night he said to the children gathered in front of him, “if one of you takes up the chariot tonight then that one will a short but glorious life and he would become the most famous amongst all the children of Erin”. As it was, the first to jump to his feet and request this future for himself was Setanta, his own grandson Cú Chulainn.

In later years as Conchubhair was beginning to feel his age, Cathbad was to predict the birth of Deirdre. A girl that would one day become the most beautiful woman in Ireland. However, because of her beauty, she would bring suffering and strife to her people. And so it was. Her beauty was to awaken lust, jealousy, and vengeance within the heart of Conchubhair himself and bring about a great tragedy for the people of Ulster. The blood of heroes would be spilled and noble families would be torn apart. It would also bring about the cursing of a king by the very druid who had loved him from his conception. This tale is known as Deirdre of the sorrows.

We don’t hear from the old tales as to how long Cathbad lived or how he died. However, from what we’re told it is obvious that he was a very powerful druid. He has always held a part in all Ulstermen’s heart, indeed in every Irishman’s heart.