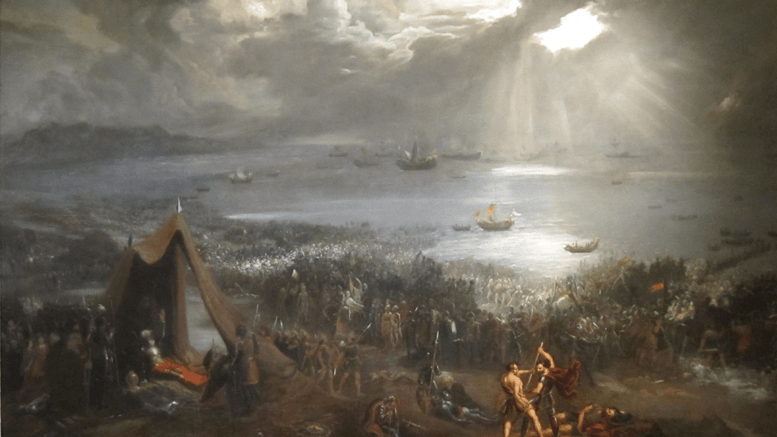 The Battle of Clontarf took place on Good Friday 1014 April 23rd, located near Dublin. The battle was between Brian Boru and the King of Leinster, Máel Mórda mac Murchada.

Brian Boru had ruled most of Ireland since 1002 but the island was still highly fractious and the title of High King of Ireland had been largely ceremonial. Brian looked to change this, and unite the island, which he set about doing over a period of years.

In the year of 997, King Brian Boru and Máel Sechnaill mac Domnaill met in Clonfert and reached an agreement were they respected and recognized each other’s reign over their respective halves of the country, however, Brian attacked Máel Sechnaill’s territory constantly, which forced Máel Sechnaill to resign his land to Brian.

In 1014, Brian gathered up his army and they made their way towards the Viking settlement of Dublin, as they approached, however, the Irishmen of Meath, commanded by ex-high king Máel Sechnaill mac Domnaill, refused to take part in the battle. This left him with 4,500 men outnumbering 1,000 or so under Sigtrygg, however, they were not as well equipped with weapons and armor. Later they arrived outside the Dublin wars and set-up camp. That night Brian received the message that the Vikings had boarded their ships and set out to sea, deserting Sigtrygg. This was a trick that was to mislead Brian. After nightfall, the Vikings turned around and landed on the beaches of Clontarf, just over a mile to the north of Dublin, in order to surprise Brian’s army the next day.

At the Battle of Clontarf

The battle took place, the Vikings were, of course, the strong components having heavier weapons, but this was an advantage to Brian also as his Viking mercenaries pushed back the opposing forces. By the end of the day, after several mutual pauses for rest, both armies were exhausted, the Vikings found themselves failing, and Sigurd dead. The beaches in front of the ships were already lost, and many men took to trying to swim to the ships further offshore, drowning in the process. The battle was now going Brian’s way and the Dublin Vikings decided to flee the town. At this point, Máel Sechnaill decided to re-enter the battle and cut them off from the bridge. The result was a riot, with every “invading” Viking leader being killed in the battle. Brodir was hiding in the woods near Dublin and found Brian praying in his tent. Brodir gathered several followers and they ran into the tent and killed Brian and his retainers. Then they retreated, with Brodir yelling, ‘Now let man tell man that Brodir felled Brian’. According to Viking accounts, Brodir was eventually tracked down, captured and gruesomely killed by Wolf the Quarrelsome with whom he had clashed earlier on the battlefield.

Of the 6,500 to 7,000 Vikings and allied forces, an estimated 6,000, including almost all the leaders, were killed. Irish losses were at least 4,000, including their king and most of his sons. There was no longer any clear line of succession. The aftermath resulted in the Irish being leaderless, and the power of the Vikings as a political force was broken.

After the battle, Gaelic and Viking cultures were no longer contesting power against one another. After many years, this led to lasting peace, and the Vikings would instead travel to England and Scotland to take their place, and eventually had taken their power when Canute the Great was installed as King in 1015. Sigtrygg had watched the battle with Gormlaith from Dublin, on the south bank of the River Liffey, and with the Irish army failing and melting away the next day, Sigtrygg ended up as the only “winner” of the contest, continuing his rule in Dublin until his death in 1042.

The battle of Clontarf remains as one of the most famous battles in Ireland.

1796 The French Attempt To Aid Ireland