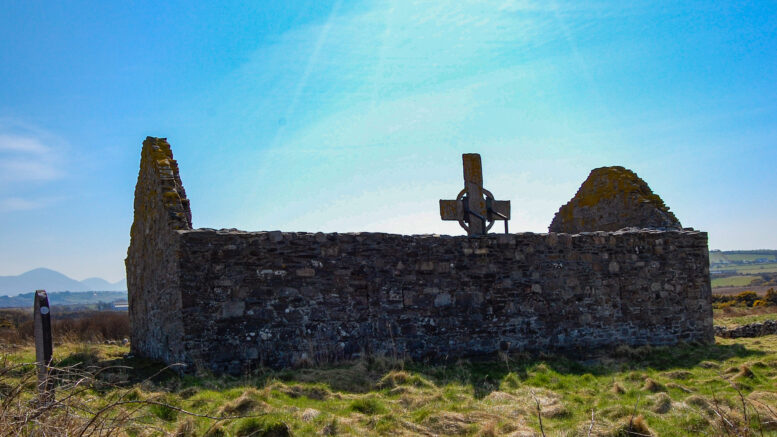 Just outside Falcarragh village in the parish of Raymunterdoney, Donegal, the ruins of Ray church can be found. Located beside the River Ray the ruins contain a large High Cross. It was also the site of a massacre by the Cromwellian Army.

A popular belief is that St Fionnán founded the original church at Ray, sometime during the 6th century. As this occurred before written records began we’ve no way of telling which Fionnán founded the site. However, many people tend to believe it was the famous St Fionnán of Clonard. It is also believed this site may have great importance during Pagan times and a small mound at the site may have been used as part of ceremony or ritual.

The High Cross of Ray Church 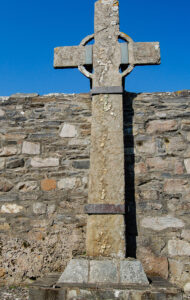 Inside the ruins of Ray Church stands a remarkable High Cross. Measured 21ft in height and 7ft wide, its believed to the largest in Ireland. Locally it’s known as St Colmcille’s Cross and legend says it was cut from a solid rock on the side of Muckish Mountain. It’s said St Colmcille was to take the cross to Tory Island but instead gifted the relic to St Fionnán after Fionnán found Colmcille’s lost holy book. However, experts dated the High Cross to be from between 800 – 900 AD, at least 300 years after the death of Colmcille.

The High Cross was damaged during a large storm in 1750. High winds brought the cross to the ground, breaking it in 3 places. Since then the cross was repaired, raised and strapped to the interior wall of Ray Chruch.

During the English conquest of Ireland in the 1600s, Cromwellian soldiers came across Ray Church. On a Sunday morning, during church service, Cromwellian soldiers busted open the doors and slaughtered the entire congregation. Its believed a mass grave was made in a field adjacent to the church and may still exist today.

Various sources lay claim the same Cromwellian soldiers were responsible for another massacre on Arranmore Island, known as the Cave of Slaughter. They were led by Captain Conyngham who would meet his fate not far from Doe Castle when he was killed in revenge for the Arranmore massacre.